Timofey Mozgov approves of his Militia ...

Share All sharing options for: Timofey Mozgov approves of his Militia ...

Unfortunately, Timofey Mozgov did not get to play last night against the Cleveland Cavaliers. I suspect he was held out due to his reoccurring left ankle sprains. A smart move by the Nuggets training and coaching staff to give the 7'1'' and 250 pound Russian big man some time off. Moz did do his usual pre-game workout around 5:30 p.m. and that's when Rory and I had the chance to present him with his own 3XL "Mozgov's Militia" T-shirt.

We wanted to honor the new father with the shirt, and Moz seemed honored by our gesture. He told us that his dad is visiting him soon, here in Colorado, and that he might give the shirt to his father. He was kind enough to pose for some pictures with us and he threw the shirt on without us even asking. Lucky for us, the shirt was a pretty perfect fit. Hopefully Moz will be here for a long time as he is the kind of person and player the Denver Nuggets need. 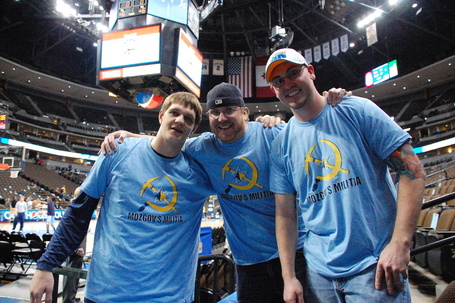 Mozgov and the Militia creators: Rory and Nate. Yes, we're standing on a raised level!

If you're interested in getting your own Mozgov's Militia T-shirt, shoot me an email at ntimmons73@yahoo.com as we're gauging interest to see about making a second batch of shirts!