Coming off a thrilling overtime victory against the Atlanta Hawks on March 13th, the Nuggets did not just get back to business at the Pepsi Center today. The team did practice earlier in the day, but after that the players and coaches were fortunate enough to get to spend a little time with some athletes with big hearts and some pretty good basketball skills too. The Pepsi Center's main floor played host to the Special Olympics Colorado Basketball Skills Clinic and it was great to see the players, coaches, and campers (over 100 of them) all having fun in the name of the game we all love.

"(This) has been something that we have done every year. I think it's really special. To see these kids so happy and sometimes I can almost say, they don't care about the players - it's about the fun of it. And you see the players, how happy they are and this year it's unbelievable, the spirit. Whatever way we can give back to kids like this, I think it's great." said Nuggets general manager Masai Ujiri.

"I think it's a great event, especially to build and continue to build a relationship with the fans. Especially with the Special Olympics." said Nuggets forward Danilo Gallinari. 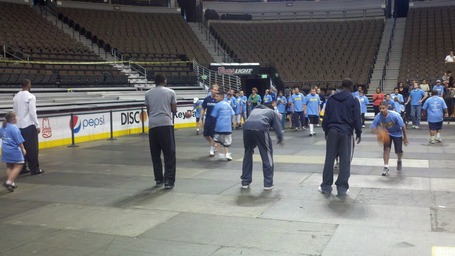 Arron Afflalo (far left in white), Jordan Hamilton, Julyan Stone, Ty Lawson, and assistant coach John Welch worked with the athletes on their ball handling skills. Welch wasted little time letting his enthusiasm take over and getting right in front of the campers in a defensive stance and challenging them as they tried to dribble past him, like Lawson or Andre Miller have to do time-after-time during games.

The players quickly followed their coach's lead and started to really mix it up with the dribblers. 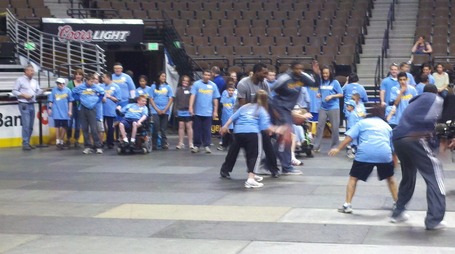 If you can get around Stone, you have some undeniable skills. Julyan is a great defender who wasn't going to be outdone by Hamilton, both rookies were giving the campers all they could handle and some high fives from Lawson after the first group was done were well deserved. It didn't seem that these guys knew how hard to push the campers at first, but once Welch got them started it was a pretty interactive drill as you can see. 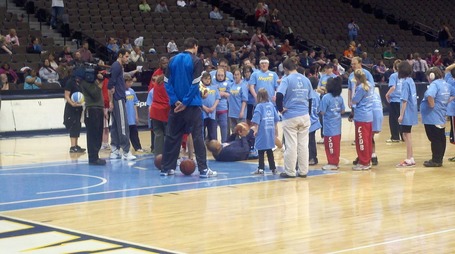 I wasn't too sure what this group was doing. Rudy and Gallo tried to stay out of assistant coach Melvin Hunt's way. Hunt was really drilling the campers and went all out. Earlier, up in the practice gym, Hunt was working after practice with Timofey Mozgov and the two got into a couple competitive arguments as they played a little one-on-one. Hunt is a very hands on coach and somebody, along with the other assistants, the Nuggets should keep around for as long as they can. 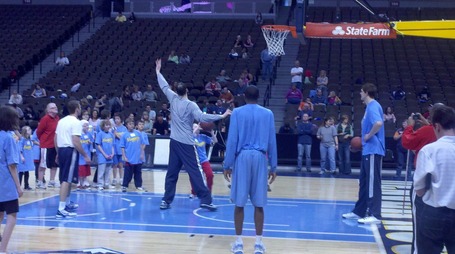 Assistant coach Chad Iske (far left in white t-shirt), Kosta Koufos, Player Development Coordinator Patrick Mutombo (powder blue long sleeve), Timofey Mozgov, and Corey Brewer (not pictured) worked with the campers in front of the visitors bench on shooting over a defender. Lucky for these athletes, they got to pick which Nugget to go against and they were not afraid to hoist shots up over K2 or Mozgov. After one camper made a shot over Brewer, he pounded his chest and hollered in excitement ... he definitely watches too many NBA games! 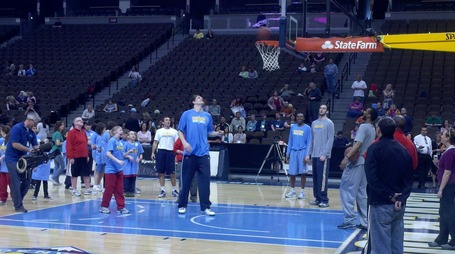 I couldn't tell if Mozgov was happy when shots went in or if he wanted to swat a few ... joking aside, he along with his teammates were excited when a ball found its home in the net and shots often went in - just like they do for opponents in real games! Ahh! 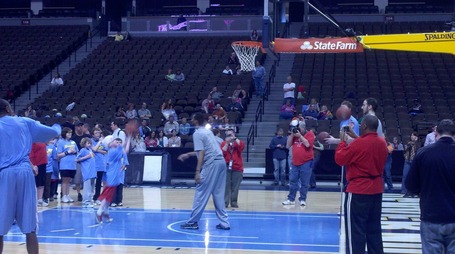 It was pretty sweet to see some of the shorter athletes take it right to the big NBA players, Brewer was picked a few times in a row after campers saw their peers having success scoring against him. 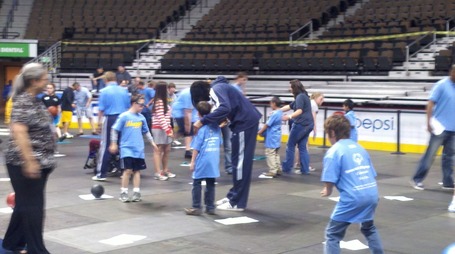 The final station for the athletes was to work on their fitness and pick up some times from the Nuggets strength and conditioning coach Steve Hess. Kenneth Faried, Chris Andersen, assistant coach Ryan Bowen, and Nene (hugging the camper) helped Hess run this station. Nene's, a fairly new father, face lit up around the campers, he truly enjoyed interacting with them and helping out with the workout station. 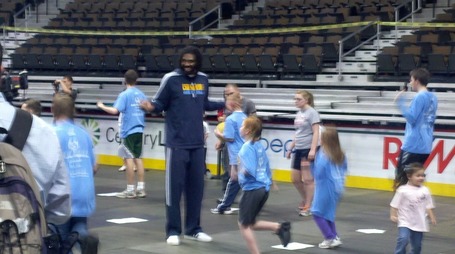 Nene was all smiles during the clinic and was one of the last players to leave the floor as he took time to sign autographs and pose for photos with just about every athlete that wanted his attention. 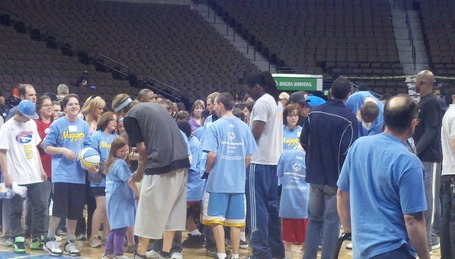 Chris Andersen, Kenneth Faried, and Al Harrington (far right in the long sleeve black shirt) and the rest of their teammates took the time after the clinic to sign autographs, pose for photos, and share some laughs with the athletes from the Colorado Special Olympics.

I didn't know this event was going on until I arrived at the Pepsi Center today to attend the Nuggets' practice. I planned on getting some quotes about the Oklahoma City Thunder game that takes place tomorrow night, but wound up getting to witness something even better. This is a good bunch of guys folks. Ujiri told me during the event how great it has been seeing Harrington embrace his role as a mentor of sorts to the younger players and how much effort he gives on a daily basis. Ujiri marveled at how far Faried has come in such a short time, think about it, Manimal went from playing in the NCAA tournament around this same time last year (for a nobody school with a somewhat nobody name himself) to becoming a starter for the Nuggets right now.

This Nuggets team may not be the most consistent one around at the moment, as injuries and youth have played a role, but it sure is nice rooting for this team and these players and coaches. George Karl was on hand doing what head coaches do ... overseeing the event, traveling around to each group of campers, and even mixing it up with Rocky by exchanging some smacks to the super mascot's nose.

Perhaps the best line of the afternoon came from a camper named Garrett, "Chris Marlowe! What's up? Can I get the autograph of my favorite sports announcer?"

A smiling Marlowe was more than willing to accommodate the request and signed the camper's Nuggets t-shirt. Garrett was onto something, I sure could go for more excited Marlowe broadcasts where he's describing Gallo hitting big shots.