Nuggets at Hawks preview: Atlanta with plenty of new faces

The Hawks traded Joe Johnson and his $569 million (approximate) contract to the Brooklyn Nets this summer and revamped their offense with plenty of shooters. Denver Stiffs readers' favorite Josh Smith is still on the roster, for now, and Al Horford is still anchoring the middle for the Hawks.

Share All sharing options for: Nuggets at Hawks preview: Atlanta with plenty of new faces

The Hawks re-tooled their lineup, sans Joe Johnson, with Kyle Korver (Bulls), Lou Williams (76ers), Devin Harris (Jazz), DeShawn Stevenson (Nets), Anthony Morrow (Nets), and former Nugget and fellow countryman of Evan Fournier - Johan Petro. Nobody messes with the Johan! Only Petro is the odd man out of the new guys in the Hawks' rotation.

Hawks head coach Larry Drew is worried about Denver's big men and how they attack the offensive glass. The Nuggets should be concerned with the three-point shooting of the Hawks; who rank 7th in the NBA in three-point percentage at 37.3-percent. The good news for Denver? Korver and Stevenson might be out of the lineup tonight.

Faried will have his hands full with Josh Smith - yet another stretch four. The Nuggets are likely better off with Smith and even Horford taking jumpers than they are if those two get their inside game going. And as Ben Hochman of the Denver Post reported, Kosta Koufos might miss tonight's contest as he's sick.

This could mean a start for Timofey Mozgov. The Russian's confidence should be at a pretty high level as he defeated coach Patrick Mutombo in a one-on-one battle after practice yesterday in Denver. Moz even showed off some dunking skills against Mutombo as the two completed an off the floor, catch, and dunk. And Moz completed a couple 360-jams as well. 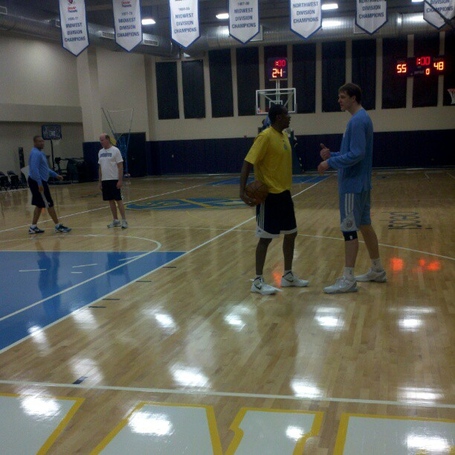 Mozgov vs. Patrick Mutombo - lots of foul calls from both parties.

George Karl was confident about this road trip at the post-game presser after the Raptors game and said he expects a successful venture away from the Pepsi Center. No better way to kick things off than to get a quality win against a well-rested Hawks team.

-The Hawks, like the Knicks, have stolen a page from the Karl playbook: THEY START TWO POINT GUARDS! The Knicks have been starting Ray Felton and Jason Kidd and the Hawks go with Jeff Teague and Devin Harris. Karl's play-making lineups are catching on around the league.

-The Hawks with be playing their 15th game of the season tonight and their 9th home game. The Nuggets will be playing their 19th game and their 13th road game. Atlanta has not played since Friday, Nov. 30th when they lost to the Cleveland Cavaliers 113-111.