Golden Nuggets: What are the forwards and wings doing to the Nuggets?

Building off what Colin Neilson wrote earlier today, it got me interested in what individuals are doing against the Nuggets. We all know about the big games from Glen Davis and Chris Bosh; let's see what else has been happening on the offensive end for the opposition.

Share All sharing options for: Golden Nuggets: What are the forwards and wings doing to the Nuggets?

Like I said above, in building off what Colin Neilson wrote earlier today about the Nuggets' defense, it got me wondering how other players have been performing against the Nuggets. I decided to pull power forwards, small forwards, and shooting guards' numbers against the Nuggets this season and just take a general look at how things are shaping up in this small sample size.

First, let's take a look at the bigger forwards and what they have been able to do against Denver: 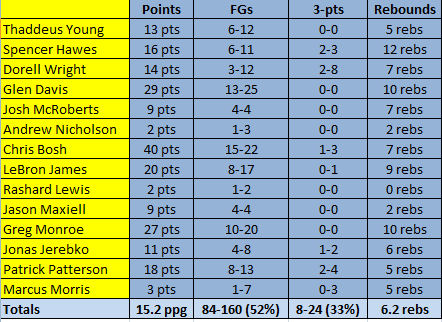 *I had Udonis Haslem in here, but with just 5 minutes of playing time, I took him out.
He was 0-1 for 0 points and 0 rebounds vs. Denver.

So, if you take the forwards to be one player the averages of 15.2 points and 6.2 rebounds is not the best news for the Nuggets defense. Obviously points are going to be scored in an NBA game and I don't even know what to take away from this other than just some useless information. But when you look at the individual numbers above, some things really stick out.

Allowing the opposition to hit over 50% of their shots needs to change. The Nuggets are allowing easy offensive rebounds and a lot of wide-open jumpers. The pick-and-roll defense is also giving big guys easy looks. Patrick Patterson burned the Nuggets last night and was on fire shooting the ball. The threes from the big forwards is not very alarming as those numbers bear-out as Anthony Carter type long-ball numbers. Would you rather the defense give up looks to big guys or to perimeter scorers? The Nuggets are forcing the big guys to beat them and thus far, the big oppositions are feasting on the Nuggets defense.

Now, if the Nuggets have allowed 160 shots to big forwards, can there be a lot left for the wing guys? Of course there can! Let's take a look at how the opposition's wings are doing against Denver: 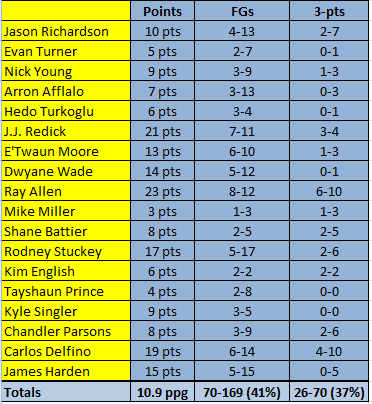 There are some guys here that really could have hurt the Nuggets, but the defense swallowed them up. Jason Richardson was a guy I was worried about, Nick Young, Afflalo, Wade, Parsons, and Harden were all held in check. In one case, does it really matter if Wade only put up 14 points if his teammates (Bosh, Allen, and James) scored 83 points? Ouch! Ray Allen and his hot shooting night killed the Nuggets, along with Redick and even Moore. Delfino kept the Rockets in the game in Harden's absence. And Stuckey "got a little right" against Denver (he was 1-23 going into that game).

I like the field goal shooting numbers and if you take out the three-point numbers, the two point shots from the wings is 44-99 or 44% ... still not bad. At the worst, average when you consider plenty of those shots are jumpers. The long ball numbers are not grand either as 37% is pretty decent for an individual player, average at least.

Again, I'm not sure what any of this means ... but it is fun to look at some individual performances and see what is happening against the Nuggets.

Did anyone else notice last night how Harden and Jeremy Lin starting finding a touch of success late when the Rockets went small and George Karl followed suit and took his shot blocking centers out of the game? Thank goodness for Andre Iguodala's shot block on that Harden three and Faried's tremendous block on Harden's layup late. Defense!

Will the marijuana amendment in Colorado affect the NBA? - Benjamin Hochman, Denver Post
With all the jokes coming on election night, Hochman does a little follow up on the Colorado amendment. Still no word on if Player X, Y, or Z will demand a trade to the Nuggets ...

The 5 Percent Theory - Zach Lowe, Grantland.com
Are the Nuggets waiting to make a title run? Lowe seems to think that is a "yes".

The journey of George Karl, regular season coach - Peter Sherwill, Rerun Nuggets.com
A look at Karl's coaching career and his win totals in the playoffs from his different coaching stops.