We'll be covering season predictions in the coming weeks, but for now let's take a general look at the team and the minutes available.

Share All sharing options for: Previewing the 2012-13 Denver Nuggets

One of my favorite lines from episodes of The Simpsons is when Montgomery Burns opens up a Casino in Springfield - Homer Simpson gets a job there and Marge Simpson soon becomes attached to the gambling lifestyle. At the end of the episode, Homer and Marge have a heart-to-heart about Marge's issue.

Homer, "You have a gambling problem."

Marge, "That's true. Will you forgive me?"

This season with the Denver Nuggets, the big phrase with George Karl is going to be, "You have a minutes problem."

If the Nuggets stay healthy, there will be a very interesting rotation this season for Karl and Company. The roster is stacked with young talent and those players are looking for opportunities to establish themselves. The Nuggets have a need to develop players this season and that is not always easy to do when the team is also pushing for elite status in the Western Conference. I've never really seen anything like this before. The Nuggets are young and they are good - how do you find the right balance with the rotation and keep everyone happy? 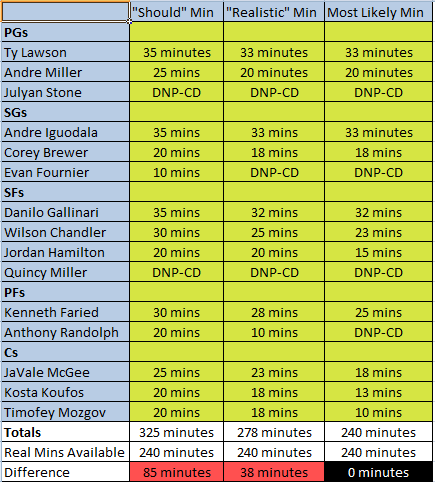 After reviewing the above chart, you can see that I'm predicting Karl won't pay too much mind to Julyan Stone and Quincy Miller. Evan Fournier has impressed Karl, but I won't believe that will earn him a ton of time moving into the actual season (I'll wait-and-see). The easiest task is taking away minutes from rookies - Karl can point to Hamilton's situation last season and show Fournier and Q that you can get better watching from the bench. Denver also can send the French Mamba and Q to the D-League, Iowa Energy, as often as they like (no limit this season on D-League assigned trips) during the season, according to Larry Coon's FAQ (question 78).

Anthony Randolph gets a DNP-CD next to his name on the most likely minutes chart as I think Karl will use him in that odd role this season. The nights where Faried gets into foul trouble or has an off night, we'll see Randolph get 15-20 minutes.

The centers ... what do you do about these centers? Can the Nuggets really have a three-headed monster here? I think Karl will go with his gut with these guys all season long. If JaVale McGee is playing well, ride that momentum - same goes with Kosta Koufos and Timofey Mozgov. Last season, it was pretty clear when one of these guys was "hot" or "not". This will be one interesting position to keep tabs on.

The wings - Andre Iguodala, Danilo Gallinari, and Wilson Chandler will eat up major minutes at various positions. Denver doesn't really define their forwards and I believe we'll see various combinations all season. Here is where Hamilton, Andre Miller, and even Fournier come into the mix - oh and don't forget about Corey Brewer! That's seven guys to keep happy. Again, Fournier suffers the most here as he's the rookie, but Karl can't stop raving about him. Brewer's energy can change games in a hurry, but believe he has a place in Karl's regular rotation as more than an energy guy. The only good news about the glut of wings is that it could prevent some of that two point-guard lineup that Karl loves. I do suspect we'll see ‘Dre Miller and Ty Lawson in the same backcourt from time-to-time, but not as much as we did in the past.

Last season Karl became too comfortable with ‘Dre Miller and Al Harrington. Masai Ujiri solved one of those problems by trading away Big Al, along with Arron Afflalo to Orlando in exchange for Iguodala. Will Karl lean on Miller and replace Big Al with Iguodala in his crunch time lineups? I think we'll see that for sure, but not as much as people suspect.

We're going to see more-and-more of the dribble-drive offense this season with the Nuggets. The drive-and-kick game is what will steer this team. Karl has said over-and-over that the team wants free throws, layups, and three-pointers. Chad Iske told me that they want the big guys setting screens, rolling to the basket, and getting under the basket. I don't know how much of a traditional post-game we will see this season for the big men - that is a big question mark. These Nuggets will play fast and constantly be on the attack, we are used to seeing that.

The defense has been all about high-risk and high-reward over the years. Iguodala will be tasked with getting this team to defend and to think defensively. We'll still see plenty of the help defense we have come to know in Denver. Karl likes the help defense as it creates chaos and leads to fast-break offense. We are not going to see the Nuggets hold teams to 85 points a night, that's not the philosophy here. The Nuggets want to thrive on chaos and control the pace of the game. I take it that winning 110-100 is the preferred style in Denver. People will say you can't win that way in the playoffs, but that is not going to stop the Nuggets from trying it. With the Thunder and Heat playing in the NBA Finals last season, I would argue that high scoring teams with active defenses are what rule the NBA today - that's what the Nuggets are going to be.

Karl introduced a moment of panic at media day when he suggested that Chandler could see some time at center during crunch time. But he also mentioned playing Faried and McGee at the end of games. We fear that not having a set rotation could hinder the team. We fear that players will tire of having to always prove themselves in practice to get minutes from one game to the next. That perhaps individuals will become disgruntled and feel slighted about their role or lack of role on the team.

Will Karl find a steady rotation at the end of games? I don't think we should fear different combinations to close out games, having various players close out games can work. It worked for the Nuggets last season and now they have more experience - it can work.

The big concept in Denver this season is placing a team mentality over a sense of individualism. Players have been towing the company line all off-season of wanting to help the team win over their own personal goals. Will that work as the season moves along and the spotlights begin to shine? It would be a joy to watch if it works.

When the Miami Heat get into a late fourth quarter contest, you know who they will lean on. Same goes with the Clippers, Spurs, Celtics, Knicks, and others. The Nuggets have no historic blueprint to lean on. They are trying to move into that rare category of a young team finding success in the NBA with team play over all else.

Do you like this plan? Does it scare you that the Nuggets are not following the usual receipt for NBA success? Would you rather have a traditional team in the sense of leaning on a couple players to make it happen? Or are the Nuggets a traditional team that just has not found their guys to lean on yet? Is what Denver is doing special or are they just buying time until they can fall back in the NBA line of traditional success? Meaning, will this team grow together or become something else?

The last three seasons of Nuggets basketball have been so completely different from each other that we have no idea what to expect. What I do know is that these players are easy to root for, hard working, hungry, and full of talent.

This is the type of team that a fan-base will rally around - hell we already have.