The Nuggets and Thunder are in a bitter Arms Race in the Northwest division. Let's take a look at where the two franchises stand in regards to their rosters.

Grantland.com's Bill Simmons wrote a tremendous piece yesterday on James Harden and his contract status. As I was reading the piece I couldn't help but to connect the dots between the dilemma facing Sam Presti and the Oklahoma City Thunder and the one facing Masai Ujiri and the Denver Nuggets, in regards to Ty Lawson.

The issues both franchises face are pretty similar in the long-term, inking a guy for near max-money. Benjamin Hochman of the Denver Post reported today that Lawson and the Nuggets are once again talking extension as the two sides have until October 31st to reach an agreement on an extension before Lawson would be set to become a restricted free agent this summer:

It's possible the contract, a five-year extension, could be worth about $65 million, based on minimum criteria in the NBA's new collective bargaining agreement.

What Hochman is referring to above is the rookie contract extension clause (put into place in the new Collective Bargaining Agreement aka CBA) that allows a team to designate one rookie to a five-year extension, instead of the standard four-year extension. Blake Griffin received that designation from the Clippers on his five-year deal for upwards of $95 million, but Kevin Love was denied that fifth-year by the Timberwolves, whom many think are holding that five-year designation for Ricky Rubio.

You might be asking yourself why Griffin can make up to $95 million, while Lawson only stands to cap-out at $65 million. This is where the "Derrick Rose Rule" comes into play:

Griffin could earn as much as $95 million over the course of the five-year extension if he is voted an All-Star starter again or named to a second All-NBA team next season under the so-called "Derrick Rose Rule" in the new collective bargaining agreement. The rule allows a player finishing his rookie contract to make 30 percent of a team's salary cap -- up from 25 percent -- if he's twice been voted an All-Star starter, twice been voted All-NBA or won an MVP award.

You see, the Nuggets will not have to pay Lawson over $65 million, unless he wins the League MVP this season. It makes the most sense for Lawson's agent (Happy Walters) to push for the five-year designation. And it also makes sense for Ujiri to consider designating Lawson for the five-year extension; as he's likely the best rookie contracted player that will come through Denver for the next few seasons. This would mean that when Kenneth Faried, Jordan Hamilton, and others reach their last year on their rookie deals, the longest they can sign an extension for would be four-years.

Another interesting provision to the four-year/five-year designation in the new CBA is that you can trade for one player (and only one player) who has been designated-and-signed to a fifth-year rookie contract while you still have a fifth-year rookie contracted player on your team (during his five-year span). Meaning, if Lawson gets a five-year extension, the Nuggets would be able to trade for Blake Griffin (or a similar player who got a five-year rookie extension) during Lawson's deal that would run through the 2018-19 season.

The Thunder used their five-year designation on Russell Westbrook last season, so Serge Ibaka's extension was only for four-years, and Harden can only be extended by the Thunder for up to four-years, as well. (Kevin Durant's five-year extension came under the old CBA before this new provision was put into place, lucky OKC.) And if the Thunder traded Harden for say Blake Griffin, then they would have two fifth-year designated players on their team and OKC would be unable to acquire another while Griffin and Westbrook's deals are in place (after the 2016-17 season).

The question facing Ujiri and Josh Kroenke? Just how good do they believe Lawson can be? If Ty gets the five-year extension before Halloween, then Ujiri and Kroenke will be placing their bets that Lawson is the point guard of the future for the Nuggets. Then again, just ask Arron Afflalo and Nene how much a long-term deal ties you to your team in the NBA. The Nuggets could still acquire another fifth-year designated player via trade, as I pointed about above with Griffin and Westbrook.

For example, what if Greg Monroe of the Detroit Pistons becomes a superstar, inks a five-year extension in 2014-15, and becomes disgruntled and demands a trade following the 2015-16 season? Then the Nuggets could be players in the Monroe-sweepstakes.

The Lawson extension is a big deal.

Let's now take a look at how Denver and OKC are looking in terms of their entire rosters for the next two seasons: 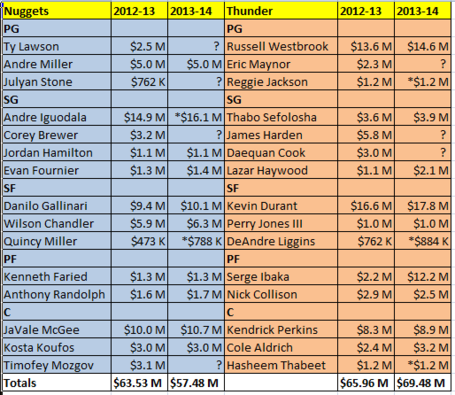 The Nuggets know they will face questions after the upcoming season on Julyan Stone, Corey Brewer, and Timofey Mozgov - a total of approximately $6.4 million in expiring contracts. And the Nuggets are facing two major questions with core players Lawson and Andre Iguodala.

Let's say Lawson signs with Denver for five-years and $65 million. He'll be making $13 million on average (we'll say starting at $11 million) starting in the 2013-14 season and the Nuggets payroll would increase to the neighborhood of $68 million while still needing to ink a few additional players and/or draft picks.

For the 2012-13 season, the NBA's cap is $58.3 and the luxury tax threshold is $70.3 million - numbers that could curve up if the league continues to thrive. The following summer, steeper tax penalties will mean that any tax team pays $1.50 for every dollar over the tax - and also, they'd be more restricted with their free agent exceptions.

More likely than not, Iguodala won't see another NBA contract that pays him $80 million. But he will be just 29 years-old after the season and could want a deal similar to Nene's deal of 5-years and $65 million - that would pay him an average of $13 million annually. (Gerald Wallace is a recent example of a guy who opted out of a high-expiring contract for long-term stability with the same team, the Nets.) While that would save the Nuggets roughly $3 million for the 2013-14 season, it would also lock Iguodala into place as the contracts and decisions must be made on the younger players on the Nuggets' roster - most notably Faried and Hamilton in the approaching seasons.

The Nuggets have yet to sign any player to a "max contract" and have thus avoided the excuse the Thunder are trying to claim now with the Harden negotiation, from Simmons' piece:

And really, even if Harden takes a little less - say, $57 million instead of $64 million - that doesn't really help the Thunder. Or so they say. Thanks to the latest labor agreement, they're arguing publicly that no small-market team can pay three max contract guys (in this case: Kevin Durant, Russell Westbrook and Harden) AND avoid the prohibitive luxury-tax penalties AND field a good enough supporting cast.

Now let's compare the rest of the roster.

The Nuggets will be paying, in 2013-14, an approximate total of $20.5 million to Chandler, Andre Miller, Koufos, Randolph, Faried, Hamilton, Fournier, and Quincy Miller (eight players). While the Thunder will shell out roughly $24.8 million to Reggie Jackson, Sefo, Hayward, Jones III, Liggins, Collison, Perkins, Aldrich, and Thabeet (nine players). Both pretty decent lists, but I'd be more inclined to pick the Nuggets' role players here.

It's just interesting to look at the long-game between the Nuggets and Thunder because they are both young teams and in the same division. OKC boasts two Western Conference Finals appearances and an NBA Finals appearance with their current roster. They are considered the cream of the crop out West, but they are facing a difficult decision with Harden.

If they choose to re-sign Harden, the OKC roster will be pretty locked in for the foreseeable future. That team should be good enough to keep competing out West for a number of years with minor roster adjustments (perhaps amnestying Perkins).

The Nuggets face a lot more questions with their roster. They have yet to win a playoff series and Ujiri said at media day that if the Nuggets were so deep then why didn't they win anything last year?

This season, the Nuggets will be playing with some raised expectations. The deep roster has earned them high-praise from ESPN's John Hollinger, who puts the Nuggets second in the West, to the Spurs. You won't find many people ranking the Nuggets outside of the top-5 teams in the Western Conference either. I see it as a six-team race out West between the Grizzlies, Thunder, Clippers, Nuggets, Spurs and Lakers (in no particular order).

There is real excitement in Nuggets Nation about this team, but there are also a lot of unsettled questions as roster shakeups have been steady for the past two seasons. Are the Nuggets getting close to settling on their roster? Is Ujiri gearing up for another trade in the future? Nothing is certain in the NBA and rosters are constantly changing; whether moves are major (Nuggets/Knicks blockbuster) or minor (Ray Felton trade for Miller and Hamilton).

October 31st is a big day for Ujiri and Presti. Each franchise must take a step in the direction of its future by Halloween and reveal what is underneath their masked arms race.