The Nuggets team, Super Mascot Rocky, coaching staff, and the Denver Nuggets dance team all played their part at Gateway High School this evening. A night that was about more than basketball.

My ears are still ringing from the crowd noise the Gateway High School students were able to produce during the Nuggets team scrimmage tonight in Aurora, CO. 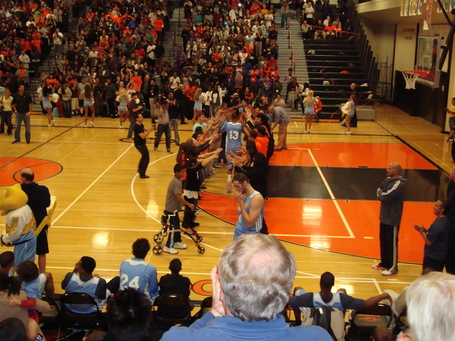 The Gateway students welcoming Corey Brewer to the court during introductions.

The Nuggets have held their annual team scrimmage at various locations over the years. Growing up I remember going down to the Air Force Academy in Colorado Springs to attend a scrimmage that my father took me to. As an 11 or 12 year-old kid I was able to meet Dikembe Mutombo, shake his massive hand (his fingers reached my elbow) and get his autograph on his All-Star card from 1992. I will never forget that experience and I don't think these Nuggets players will soon forget tonight either. 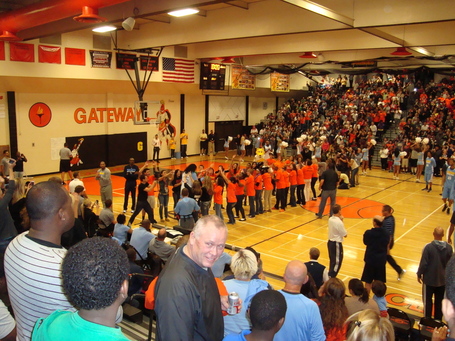 It was hard to tell who got the loudest introduction cheers, but Faried (here), McGee,
Iguodala, and Lawson all received deafening applause and screams from the students.

"It means a lot for us as a community just to give back," said Kenneth Faried. "We just came out here to have fun, enjoy ourselves, and put on a good show. And it helped us too because we got a little cardio in."

The reason the Nuggets chose Gateway tonight, from the team press release:

Gateway High School is located just a mile from the Century 16 Theaters. Following the tragic events of the theater shooting on July 20 - friends and family members gathered at Gateway to receive health updates about people at the theater during the shootings. More than 60 Gateway students were at the theater and sadly two students were shot - one fatally and another is a senior football player who has survived.

"That was a serious matter, it's still on people's minds and they're still thinking about it," said Jordan Hamilton. "So, for us just to come out and make these kids' day (it was special). There were even some parents in the crowd; you know I thought that was good for us and the Nuggets." 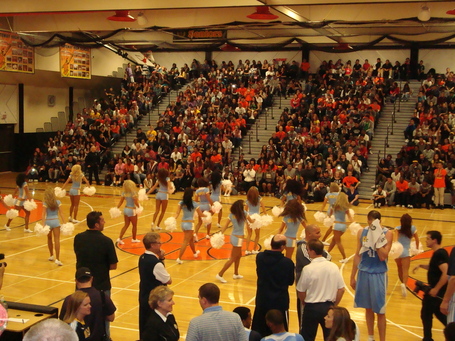 The Nuggets Dance Team got in a little work tonight as well.

And it was an important experience for the students and faculty on hand, as well. Gateway Principal Bill Hedges was presented with a team jersey just before tip-off and spent much of the game talking with faculty, parents, and interacting with his students. It was easy to see Hedges appreciation for the event and his school's love for him.

"It means the world to us. It's just another great example of the community support that we have had in the last couple months; part of the healing process. I think the Nuggets might have made 1,500 lifelong fans tonight. I think our kids will not forget this soon," said Hedges.

The Nuggets were able to interact with the students before the game, signed autographs before-and-after the contest, posed for pictures, and launched countless signed goodies into the crowd during timeouts and during halftime. The team put on quite a show on the floor too. Numerous alley-oops and crowd pleasing dunks fired up the student section. The Gateway students were able to see first-hand some of what this team is capable of.

"I'm not a really big fan of basketball, but after what I saw I know they have got potential so I will definitely be watching some games," said Michelle Aguayo, a Junior at Gateway who plays softball and soccer.

When I asked Junior Zeph Baca if this Nuggets team could win a championship this season he didn't hesitate in telling me, "Yes."

It must have been pretty surreal to see NBA players out there on a high school court where these students themselves have physical education classes.

"I thought it was pretty great. It was such a wonderful surprise," Aguayo said. "If you stay together and you show up to school then you get rewarded with a wonderful team like the Nuggets."

"It was just crazy to actually see these guys, here, right there (pointing to the court) on the court. It meant the world to me honestly," said Baca. "(JaVale) McGee was really nice."

And not only was McGee nice, he also put on a heck of a show scoring 21 points (an unofficial tally from Adam Kinney and myself) on a variety of alley-oops, bunnies, free throws, and dunks.

The Blue team got out to an early 30-17 lead and never looked back. They were up 52-35 at the half, thanks to an Anthony Carter corner three at the buzzer, and won the game going away 90-72. 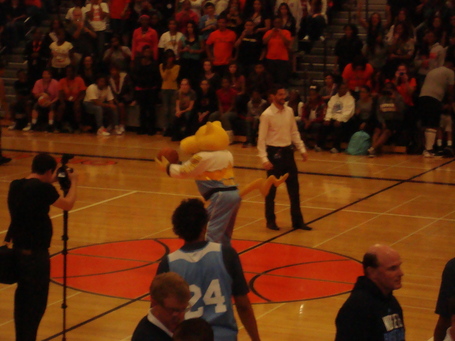 Super Mascot Rocky tried his trademark backward-shot, but couldn't connect on either hoop.

The White team was ice cold from three-point land where Iguodala and Brewer had issues getting their long-range shots to find their home. Lawson's squad was creating turnovers and running their opponent ragged. Ty showed off his new-and-improved left hand. He finished three different drives to his left with his off-hand, first over Mozgov, then Iguodala, and finally Brewer. He said he worked hard on improving with his off-hand and he wasn't kidding.

On a high-school court, there wasn't a lot of running room or room in general and the big men suffered the most. Yes, McGee scored in bunches, but we didn't see a lot of post play from the Nuggets big guys. The game was fast-paced and there was a lot of chaos, but at some point the half-court work needs to start showing up. George Karl, an observer tonight as he handed off coaching duties to his assistants, said he wanted to spend the first chunk of camp devoted to defense. Now as the team transitions into offensive sets, we should see some improved offensive play come this weekend and moving into next week as the preseason games heat up. 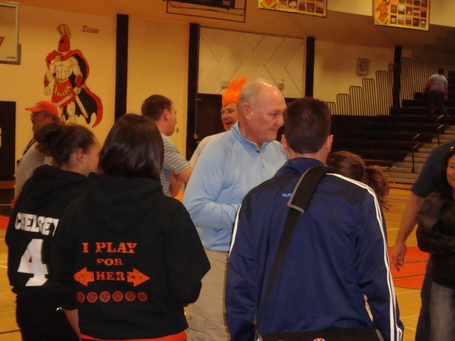 George Karl after the game taking pictures and signing autographs with students.

"Three years ago when I was in high school," said Hamilton. "It felt good coming out and playing in front of the kids, I had fun."