Share All sharing options for: Golden Nuggets: Weekend at Bernie's 3... 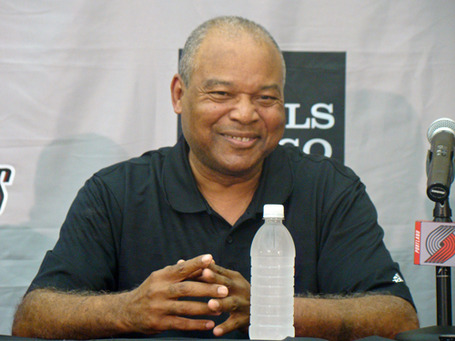 Just as the Minnesota Timberwolves (former) head coach Kurt Rambis was about to get the ax by president of basketball operations David "KAAAAAHHHN!!" Kahn, sources leaked that a familiar face to Nuggets fans could become the Wolves next bench leader: Bernie Bickerstaff.

Bernie Bickerstaff could be named the head coach of an NBA team in 2011?

To quote John McEnroe: "YOU CANNOT BE SERIOUS!!"

You mean the same Bernie Bickerstaff who is now 67 years old?

The same Bernie Bickerstaff who has a career coaching record of 415-517?

The same Bernie Bickerstaff who has a career post-season record of 12-31, including four sweeps and just three playoff series won?

The same Bernie Bickerstaff who, as vice president of basketball operations in Denver, traded the Nuggets' 10th overall pick in the 1996 draft along with Jalen Rose and Reggie Williams for the 23rd overall pick, Mark Jackson and an aging Ricky Pierce? Then drafted Efthimious Rentzias (a player Bickerstaff later admitted he never scouted in person) with the 23rd pick? That Bernie Bickerstaff?

The same Bernie Bickerstaff who, soon thereafter, allowed All-Star center Dikembe Mutombo to leave ... for nothing?

The same Bernie Bickerstaff who gave up on Mahmoud Abdul-Rauf by trading him to Sacramento for an aging and injured Sarunas Marciulionis and a second round pick? (I'd love the Nuggets modern day PR machine to spin that trade if it ever happened again.) Then himself left his assistant coaches - including his own mentor, Dick Motta - and the Nuggets organization to twist in the wind while bolting Denver in mid-season for Washington, DC?

The same Bernie Bickerstaff who, while coaching in Washington in 1998, had Chris Webber and Juwan Howard on his roster ... and partook in trading Webber (over Howard) for an aging Mitch Richmond?

The same Bernie Bickerstaff who, while serving as head coach and general manager in Charlotte in 2006, collaborated with Michael Jordan to draft Adam Morrison second overall? How did that pick turn out?

At each stop in his NBA journey, Bernie Bickerstaff has left franchises worse off than how he found them. Amazingly, Bickerstaff has been able to parlay being Motta's assistant coach for the very successful Washington Bullets of the 1970s (believe it or not, Washington was great in the 1970s) and a single spirited run as head coach of the 1986-87 Seattle Supersonics (when his 39-43 Sonics stunned the basketball world by getting to the conference finals) into three decades of gainful - yet destructive - employment.

Marginalized lately as an assistant coach to Vinny Del Negro in Chicago and Nate McMillan in Portland, Bickerstaff appears to be in the running for the now-vacant Timberwolves head coaching position, after David Kahn cruelly jerked Kurt Rambis around for a few months and finally fired him on Tuesday.

Well, one "better" option might be 71-year-old Don Nelson, now rumored to want the Wolves' coaching job. Unlike Bickerstaff, Nelson has actually won more than a handful of basketball games as an NBA coach. The most ever (1,335), to be exact, and well above .500 for his long career.

But like Bernie, Nellie is a retread, has gotten worse with age and would be an uninspired coaching hire by Kahn. Just like Larry Brown would be. And as long as the Bernie's, Nellie's and Larry's continue to get re-hired - despite burning bridges with organizations, screwing colleagues and friends, and pissing off players everywhere they've ever coached - the coaching position will never progress in the NBA. Say what you want about the Heat's Erik Spoelstra, but I for one was thrilled to see a relatively young guy without a big name get a shot at a head coaching position this past season. Lest we forget that at some point in their careers Phil Jackson, Pat Riley, George Karl, Rick Adelman and Rick Carlisle were young guys without big names who were given head coaching opportunities.

Of course, as the fan of a team that happens to be located in the Wolves' division, no one is rooting harder than me for Kahn to hire Bickerstaff. A Bickerstaff hire would all but guarantee that Love walks and takes less money elsewhere, Rubio never develops and Williams demands out after just one season.

As an NBA city, Minneapolis doesn't have a lot going for it. The last thing it needs Bernie Bickerstaff for a head coach.

Sources -- Don Nelson interested in coaching Minnesota Timberwolves - ESPN
Don Nelson -- the winningest coach in league history -- is open to a return to the bench and intrigued by the talent on Minnesota's roster.

Breaking down the Bernie Bickerstaff Administration (Part 1 in a 5-Part Series)... - Denver Stiffs
In case you forgot just how bad Bernie was for the Denver Nuggets.

Bickerstaff's Lessons Go Deep
To show that I'm not a heartless, unbalanced bastard here is a nice article about Bernie Bickerstaff the person and what it was like for Bickerstaff to grow up in the Jim Crow south of the 1950s.

From the Archives...
Nuggets Mess is Bickerstaff's Legacy - Bob Kravitz
While writing for the Rocky Mountain News, Kravitz made sure Bickerstaff didn't leave town without a proper skewering of his record and his classless departure.