Some very fine pundits make a pretty nice living talking about who they think NBA teams will draft. Chad Ford of ESPN and Sam Amick of Sports Illustrated along with a couple websites dedicated to the NBA draft provide draft junkies with all the information they could want about the incoming prospects. With the draft a little over a week away, it's time to see what direction the experts think the Nuggets will head.

When we started up our draft talk here I began by looking at the power forwards that were to be available for the Nuggets because both Kenyon Martin and Nene were in positions to perhaps test free agency. K-Mart will for sure be an unrestricted free agent, but it seems like Nene will exercise his player option for the 2011-12 season and in addition to that sign a three-year extension with the team. We shall see ...

Just about the only thing the mock drafts agree on in regards to the Nuggets is that Denver will be looking for help at the shooting guard or small forward positions. What this tells is that the experts are thinking the Nuggets will probably lose J.R. Smith or Wilson Chandler (or likely both) and that Denver might be set with their front-court big men (and Ty Lawson has the point guard duties on lock).

Some of the issues rolling around in my head with the Nuggets No. 22 pick are as follows:

With those questions surrounding Nuggets Nation as the draft approaches, let's now take a look at where the pundits think the Nuggets draft needle is pointing this week ... remember these mock drafts have a habit of changing quickly.

Nate's take: The thought on Harris is that he's more of a small forward or a power forward for a team that plays an up-tempo style and Ford has remained steady in his belief of the match between Harris and the Nuggets. Harris is being billed as a guy who is a jack-of-all-trades and a master of none as he enters the league after just one season at Tennessee. I like what I hear about his work ethic and basketball I.Q. and in watching some interviews with him he seems like a humble young man. It's possible that Harris could see a small growth spurt at just 18 years-old as he measured roughly 6'6'' without shoes and owns a 6'11'' wingspan. If  you watch Harris' highlights see if you see what I see - Carmelo Anthony. Also a New Yorker, Harris has that same cherubic face and build as Melo and a similar inside game. Harris does a lot of work below the rim and uses his bigger frame to punish smaller players. Away from the basket Harris doesn't look as comfortable. The Draft Express.com report on Harris stats he only hit 28% of his catch-and-shoot jumpers, and like Melo he doesn't look as comfortable shooting on the move. Tennessee played a similar style to the Nuggets, as the Volunteers liked to get out and run, and Harris could fill a nice void for Denver off the bench as a scoring forward.

Again, the billing of being a hard worker bodes well for Harris' shooting and hopefully with some work he'd be able to hit the NBA three-pointer and jumpers with consistency. He was a knock down shooter when he got is feet set. His age is a plus as the youngster is nowhere near the player he could be with the right practice habits. The uptempo Nuggets pace fits Harris, but I worry about him finding his offense in a half-court set as a rookie. He's used to being able to bully smaller guys and he will need time to find his offensive feet. There are concerns about his defense, but the Nuggets do a good job of hiding weak defenders with their trapping/rotating style. Some mock drafts have Harris off the board before the 22nd pick, but it looks like he might be a player the Nuggets will get an opportunity to select and he would be a fine choice if Wilson Chandler is not expected back. 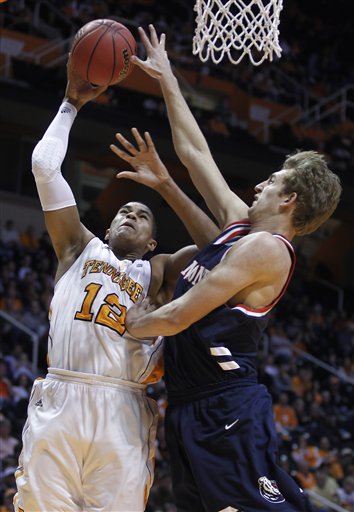 Tobias Harris likes to use his big body to score inside.

Nate's take: Both Amick and Ford see the Nuggets taking Harris if he's there at No. 22 and only Tom Zillar of SB Nation sees Denver passing on the Tennessee product as the other sites (see below) have Harris off the board when Denver is set to pick. We'll see if things change as the draft approaches ...

Nate's Take: If the Nuggets are really looking to replace Wilson Chandler and Hamilton is on the board - then he should be the pick. The problem is that Hamilton shouldn't be on the board when Denver selects - Ford has him going No. 16 to the 76ers, Amick has him going No. 18 to the Wizards and NBA Draft.net has him going in the lottery at No. 11 to the Warriors (not sure I buy that one). He measured 6'6'' without shoes with a 6'9'' wingspan.

How is Hamilton different from Harris? While Harris is a SF/PF tweener, Hamilton is more of a shooting guard / small forward. He says he models his game after Danny Granger and fellow Los Angeles native Paul Pierce. The Texas college product liked to hang out on the perimeter on offense and he loves to shoot the three. I see Chandler's game in him for sure and he might even be an oversized J.R. Smith. Hamilton fancies himself a pretty good rebounder and attributes his success on the boards to him being one of the bigger players on his teams when he was younger and playing center. Hamilton is a more explosive player than Harris and plays the game above the rim when he gets inside. While Harris seems to be an efficient scorer - Hamilton seems to be a volume shooter.

Hamilton could be the perfect bench scorer the Nuggets are looking for, but he also could be enough of a defensive liability and selfish offensive player that Denver might want to steer clear of him. And while the Nuggets might want to utilize Hamilton's abilities off the bench - I'm pretty sure he sees himself doing much bigger things in the NBA ... whether his on-court production merits it or not. 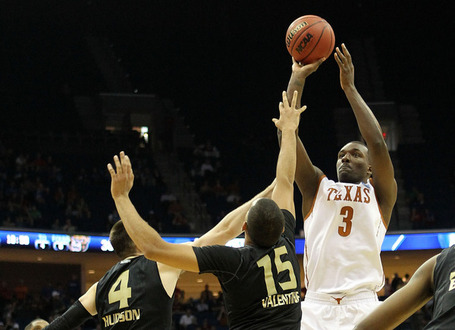 Jordan Hamilton liked to shoot out on the perimeter at Texas.

Nate's take: The Illinois native would definitely have to work hard to find minutes if he were drafted by the Nuggets. Standing 6'4'' without shoes and possessing a 6'9'' wingspan the combo guard wowed a lot of folks at the draft combine with his athleticism. In some interviews with Shumpert he sees himself as an energy guy (aka coming off the bench) who can guard just about anybody. There is no doubt that his offensive game needs to see some improvement on the NBA level as his outside shooting isn't quite where you want it from the guard spots. But guys like Arron Afflalo have come into the league with suspect range and quickly proven their doubters wrong with hard work in the practice gym.

Shumpert is a tantalizing prospect because of his freakish athleticism and defensive mindset, but just as Ford and Amick don't see Shumpert as a first round pick - I also don't see the Nuggets taking a chance on him at No. 22. I cannot see Shumpert getting the playing time he would require at the point guard spot as the Nuggets would likely want a veteran backup if Felton were to be traded. And if J.R. Smith leaves then the Nuggets can't rely on a player with such a raw offensive game to do much for the second unit at the shooting guard position in Shumpert. 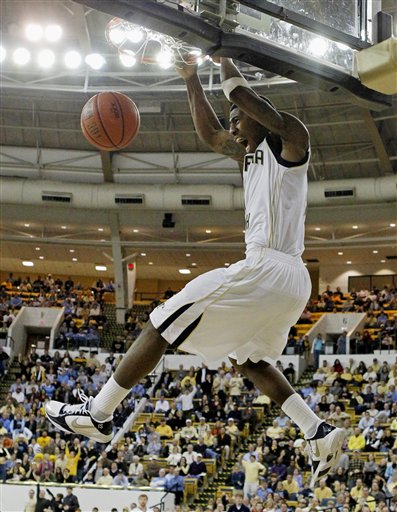 The athletic Iman Shumpert was a high flyer at Georgia Tech.

Nate's take: The Georgia boy is a confident player who famously scored 52 points against the Notre Dame Fighting Irish this past season, but lost that game. Brooks impressed the basketball world when he measured just 6'4'' without shoes but posted a 7'1'' wingspan like the likes of Trevor Ariza and Josh Howard (reach in fouls anyone?). That's the wingspan you typically find on a power forward or even a center, but Brooks possess it as a guard.

When I watch Brooks play I can't help but to see a little Tyreke Evans in his game. In pre-draft interviews Brooks has stated that once he gets the hang of the NBA game he could see himself becoming a good scorer. Like Evans, he likes to have the ball in his hands to create his offense. Not quite a point guard and not truly a shooting guard as he does a lot of his work off the dribble and has an awkward jumper. Brooks showed drastic improvement in his time at Providence and became a great scorer in his senior season.

He'd be an interesting selection for the Nuggets as a backup to Afflalo and he could see some time as the third point guard if the team needed it - I'm just not sure that his teammates would see too many passes. Brooks isn't known for his athleticism, but he has a knack for putting the ball in the basket and is used to playing in an uptempo style. Probably not ready for big minutes right away he could be a nice option off the bench for the right team and could really excel in that role after a season or two refining his game. With that said, I'd be pretty surprised if the Nuggets went with Brooks with their first round selection. 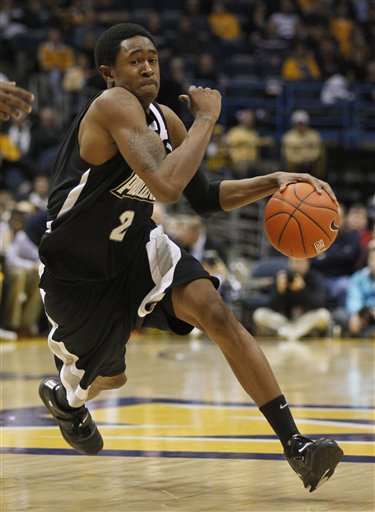 The lanky Marshon Brooks wants to be a scorer in the NBA, like he was
during his time at Providence.

The Nuggets' draft needle is pointing in a few different directions as far as names go, but the thinking seems to be that the Nuggets are looking for some type of swingman at either the shooting guard position or the small forward spot. We've already asked you Stiffs what position you want the Nuggets to select and if Denver should base the pick off the best available player or not.

Do you trust these mock drafts and do you like the thinking behind the players on the Nuggets' radar according to the draft experts? In the comment sections I've read names like Jordan Hamilton (mentioned above), Reggie Jackson out of Boston College by way of Colorado Springs, Jeremy Tyler - the center prospect from San Diego, California who played over in Israel this past season, Nolan Smith out of Duke, Kenneth Faried out of Morehead State, and some others as well. We'll be keeping an eye on the mock drafts and updating them next week as the draft approaches - tell us what you think my fellow Stiffs.

All photos courtesy of AP Photos.