Bill Reynolds and Chris Herren team up once again, this time to delve into Herren's issues with substance abuse and his road to recovery. The author and former basketball player first met when Herren was a junior at Durfee High School in Fall River, Massachusetts - where Herren was in the early stages of his downward spiral. 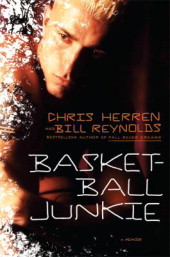 There have been a lot of stories about redemption that have come through in book or movie form. Recently, in 2009, we saw an uplifting story about Baltimore Ravens offensive linemen Michael Oher titled, "The Blind Side" - this movie didn't deal with a character who was struggling through a drug problem. Instead, Orr was able to rise above his surroundings and make a better life for himself.

The 2008 book titled, "Hero of the Underground" was all about former NFL defensive linemen Jason Peter and his struggles with substance abuse. The book, written with Tony O'Neill, goes into great detail about Peter's struggles with alcohol, opiates in the form of painkillers, cocaine, heroin, and more.

Having finished Peter's book just a couple of months ago, the story was still fresh in my mind. Peter did speak about his parting life during college a little bit and more about his parting ways once he was drafted by the Carolina Panthers, 14th overall. The thing that stuck with me about Peter was how it seemed that his drug problem was kicked into high gear due to the injuries he suffered on the football field.

Peter was given painkillers to deal with surgeries to his shoulders and neck and took it upon himself to get creative with the amounts of painkillers he was able to get his hands on. Once he got himself hooked on opiates he started to abuse cocaine more-and-more as well. Peter used his status as a football player to convince doctors to write him prescriptions that he didn't need, pharmacists filled orders for him that he never had, and once he got to Hollywood he used his connections to dive even deeper into the drug life he chose.

Before I even opened the front cover to "Basketball Junkie" I expected I already knew the story about how Chris Herren lost his way and washed out of the NBA. I just figured that I would be reading the basketball version of Peter's book about an injured player who fell down the wrong path. I was wrong.

Herren and Peter couldn't have had a different upbringing or a more different goal with their lives. Peter was focused on making the NFL from an early age and was part of a pride of sorts with his two brothers (one older and one younger) who were also aspiring to become NFL players (the elder made it, along with Jason, but the youngest did not because of a freak accident).

Herren talks about basketball as more of a burden than anything and you'll be surprised to hear about his NBA dreams. And had Dan Issel and the Denver Nuggets really known what Herren was up to, they never would have selected him with the 33rd pick of the 1999 NBA Draft. A draft where Herren should have gone much higher, if he hadn't been on such a destructive path.

By the time the Nuggets had selected Herren he was already well-known for his issues with cocaine. Having been dismissed from the team at Boston College for failed drug tests, Herren was in the spotlight thanks to some media attention. He was given a second chance by legendary coach Jerry Tarkanian at Fresno State - where he was clean for a short time and then was back to partying almost full time, even with a local gang.

Herren had once been a high school player who was paid a lot of attention by some big time schools. Take this excerpt for instance:

"We were playing in something called the John Farrell Tournament ... the most prestigious AAU Tournament in the country. ... And when it ended, we had won the tournament and I was the MVP.

I had gone out to Vegas as one of the most recruited players in the country and came back as one of the true elite. One scouting service had me as the seventh best prospect in the country. ... (Rick) Pitino and Kentucky were now recruiting me, and Pitino had assigned Billy Donovan, one of his assistants, to watch over me."

Somehow Herren was able to play through high school, college, the NBA, and even ball overseas while being on some substance or another.

For Nuggets fans this book hits home in a number of ways. In chapter six we learn that Herren lived with current Nuggets assistant John Welch and Danny Tarkanian when he first went out to Fresno State. A short bio on the Nuggets assistant:

Welch joined the Nuggets after two seasons as an assistant coach/workout coach for the Memphis Grizzlies. Prior to his arrival in Memphis, he spent seven seasons as an assistant coach at Fresno State, serving under head coach Jerry Tarkanian, one of the winningest coaches in NCAA history. Welch joined Fresno State in 1995 and helped the Bulldogs to two consecutive NCAA tournament appearances, six consecutive 20-win seasons and seven straight postseason appearances. In 2000-01, he helped the Bulldogs to a 26-7 record, the second-most wins in school history; a school-record tying 13-game winning streak; and a Top 25 ranking during the second half of the season. Read more here.

Welch helped Herren transform his substance addition into a workout addiction for a short period while he was at the California college. Welch surely helped Herren enough, along with the rest of the staff, to be able to make a go of things in the NBA.

Chapter eight focuses on Herren's time with the Denver Nuggets. Looking back at that 1999 NBA Draft you can see there are still plenty of guys who are still making major contributions in the league; Elton Brand, Baron Davis, Lamar Odom, Richard Hamilton, Andre Miller, Shawn Marion, Jason Terry, Corey Maggette, Ron Artest, James Posey (the Nuggets' 18th pick), Jeff Foster, Andrei Kirilenko, and 57th pick Manu Ginobili. Had Herren taken care of himself there is no telling what pick he would have been in the draft or how different his career would have played out. But from the names above, it's not far fetched to think he could still be playing in the NBA.

There are some nice mentions in chapter eight about Antonio McDyess, Chauncey Billups, and other Nuggets. Although Herren's time with the Nuggets was very brief, just one season, you can tell he has regrets about his time here as he sums up the chapter talking about how he should have stayed in Denver during the off-season instead of returning home to Fall River.

And Fall River is where it all began for Herren. The tough family upbringing, his success on the basketball court, and his first encounters with drugs and alcohol. Like most tales that actually make it to print there is a story of redemption here, but there is also a lot of moments where you ask yourself why Herren was trying so hard to sabotage his own life.

The book is definitely worth the read. As the playoffs march on we see Jason Terry and Shawn Marion, guys in Herren's draft class, still fighting for their first championship. And with this book we read about a guy who was on a similar path, but had to instead fight for his life.

Fall River Dreams by Bill Reynolds - a great read that introduces you to Herren and his town.