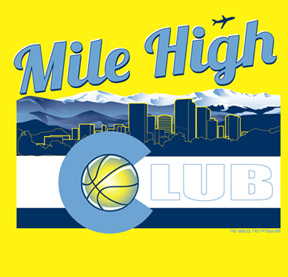 The rowdiest fans at the Pepsi Center have their own section come playoff time. Thanks to an idea, born at a Magic vs. Nuggets game, from Jonathan Diedrich and five of his friends - the diehards have called the upper deck home for the past five playoff runs. This season will be no different, except of course for the name change from Melo's Yellows to the Mile High Club.

When the NBA playoffs roll around they say the game itself changes drastically. Well, I can tell you firsthand that the crowd at the Pepsi Center also changes, thanks in part to Diedrich and the fan section he helped create and maintains today.

When I received notice of the new name for the section I couldn't help but to let out a small chuckle. After thinking about attending games in years past with the Melo's Yellows crew I realized what Diedrich was doing was something pretty special. Most of the readers, if not all, of Denver Stiffs are some of the most fanatical Nuggets fans I've ever run across. We've all found this blog to be a place where we can discuss the team, share some laughs, get in some heated debates, and hopefully grow a bit as fans and people. The Mile High Club also has been a great place to meet other great Nuggets fans, shares some stories, watch games in a very entertaining way, and make some new friends along the way.

I was curious as to how Diedrich got started and what, if any, hurdles he encountered along the way. I've encountered various friends at the MHC pre-game events and during the games themselves and we all seemed to be finding out about the section through different avenues. So I emailed Diedrich and asked him to share his story in a Question and Answer format, he was kind enough tell his tale about the Mile High Club formation.

1.) Initially, what prompted you to want to create a big section for the Nuggets playoff games? Was there a big demand for tickets from your friends or were you confident you could fill up a lot of seats?

Jonathan Diedrich: In 2005 six of us attended a San Antonio Spurs playoff game. Literally all the fans around us got upset at us for cheering and trying to have a good time. The next season my friend Jake and I were at an Orlando Magic game sitting in the upper level and there was barely anybody in our section. We just talked about how much fun it would be to create our own "student section" where everyone stands and cheers the entire game. So about halfway through the game I looked at Jake and said, "Do you think we could fill this whole section up with our friends?" and he said, "Yep!" That's all she wrote, I called the Nuggets the next day and Melo's Yellows was born. So there never really was a demand, but once I let everyone know the plan they were all on board and it has grown every year since. 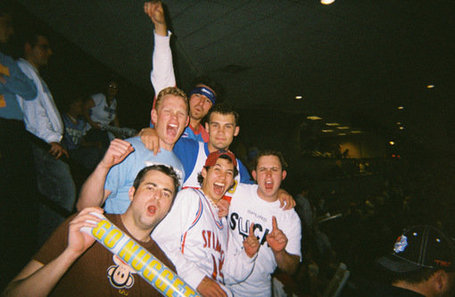 The "Original Six," creators of Melo's Yellow, now the Mile High Club
at the Nuggets vs. Spurs playoff game in 2005 at the Pepsi Center.

2.) What kind of process did you have to go through to make your goal of creating a section a reality?

Diedrich: The Nuggets ticketing staff has been very helpful since day one. I met with them and let them know my idea and then figured out the most convenient way to make it work. From there I had to decide on a name. Carmelo Anthony was a rising star in the league and I wanted the section to stand out, so Melo's Yellows worked perfectly with the bright yellow T-shirts. Before the playoffs started that year I sent email out letting everyone know what we were doing and just making sure that they were all Nuggets fans and that they were willing to stand and cheer the entire game. The whole reason I started the section was because I wanted to create an atmosphere for real Nuggets fans who want to cheer for their team and have the best time possible at an NBA game. The past few seasons we have used Facebook  to spread the word. This year we will be adding a Twitter account.

3.) This season the section will be going under the name, "Mile High Club" - what prompted the more "section oriented name" versus an individual name?

Diedrich: In the NBA nowadays it is rare for a player to stay with a team his whole career. Obviously when Melo left it was frustrating, but I'm sure every fan agrees it has been refreshing to watch this team play together the past few weeks. We did consider naming it after coach Karl, Nene, Birdman, Lawson, and even J.R. Swish, but in the end instead of picking an individual we decided to and give the section it's own identity.

Diedrich: As of right now we are sold out and have a waitlist for the playoffs, but I encourage anyone who is a real Nuggets fan and wants to join to email me at melosyellows@gmail.com or nuggetsmhc@gmail.com and let me know you are interested. Every year we have no shows and people back out last minute so you never know when there will be an opening.For updates and pictures you can also add us on facebook facebook.com/melosyellowsor follow us on twittertwitter.com/UpperWreck

***
The links - playoff centered ...
Western Conference preview: Door open for Thunder, Nuggets? - Sekou Smith, NBA.com
A great preview of the Western Conference.
Bulls - Pacers Round One Preview: Leaning on others to focus on an unfair fight - your friendly BullsBlogger, Blog-A-Bull
Some interesting numbers in this preview.
Bulls vs. Pacers: Outpacing Bulls Can Be a Valuable Advantage for Indiana - Nathan S., Indy Cornrows
Turning up the tempo in the playoffs can be a tall order.
2011 NBA Playoffs: Lakers Vs. Hornets First Round Preview - Dexter Fishmore, SB Nation Los Angeles
A Laker centered look at the upcoming first round against Chris Paul and Company.
Blazers vs. Mavericks In 2011 NBA Playoffs: Thursday's Full Court Press - Ben Golliver, Blazersedge
Ben takes his readers through all the Blazers preview talk.
Celtics: Some Playoff Minded Thoughts - Tom Halzack, CelticsBlog
The Celtics are leaning on guys like Glen Davis, Nenad Kristic, and Troy Murphy this post-season ... weird.
Nate_Timmons on Twitter
ntimmons73@yahoo.com