We've all been able to enjoy what Wilson Chandler has done in his short time with the Denver Nuggets. Through four games with the team, he is averaging 16.7 points and 4.5 rebounds and is a big reason why Denver is 3-1 with their new players in the lineup. And if the Nuggets are able to keep Chandler in Denver long-term, the local community will be big winners as well.

Since the big trade between the Nuggets and New York Knicks, the biggest thing I've noticed in the comment sections of Denver Stiffs has been the outpouring of Knicks fans wishing their former players well and pointing out to Nuggets fans what they can expect from the new additions.

Well, we've all been able to see what the new players can bring. We even got our first looks at Timofey Mozgov and Kosta Koufos against the Charlotte Bobcats last night. And while the headlines the Nuggets are making with their on-court performance will grab a lot of attention (they are 4-1 since the trade and 3-1 with the new players in uniform), I'd like to shine a little spotlight on an off-court performance.

Going through my emails this week I came across one with "Wllson Chandler" in the subject line. I have been quite impressed with Chandler this season with both the Knicks and the Nuggets. I've heard that he's a guy that doesn't show a lot of emotion on the court and after reading the email I learned that he's a guy who has show incredible compassion away from the court.

Please read this email and see what I mean by the city of Denver gaining an asset with a guy like Chandler in town.

My name is Jamie and I am a New York Knicks fan and represent The Knicks Blog radio host Anthony Donahue. Over the past several years Anthony has been a big supporter of Wilson Chandler and we are sad to see him go. We just wanted to contact a Nuggets blogger to say hello, and let them know what a gem person and player they have. Wilson is a quiet character but his heart has always been in the right place. Not only have we valued him as a player for the Knicks, but he is also applauded off the court.
This past summer Anthony organized an event in the Bronx, New York to raise money for the New York Knicks Garden of Dreams. Anthony's 10 year-old sister had just been diagnosed with brain cancer in the spring, and he wanted to raise money for her and the New York Knicks Garden of Dreams. Anthony called Wilson, and explained the situation. He wanted to raise money by having Chandler and Patrick Ewing Jr, cut hair at a local barbershop and ask for community members to donate money. Now, Mr. Chandler was by no means a trained barber, but showed up to the event with Ewing Jr. They chatted with fans and members of the community, took plenty of photos, and cut hair of anyone who was willing. It was all in good fun to ask these basketball players to play barber for the day, but they showed up with smiles on their faces and the best attitude. No media was present, or called and they received no compensation for their generous actions.
Thank you for taking the time to read this, and we hope that has a member of the Denver media you want to share this story about your new forward. Attached are some photos of the event as well.
Kind Regards,
Jamie 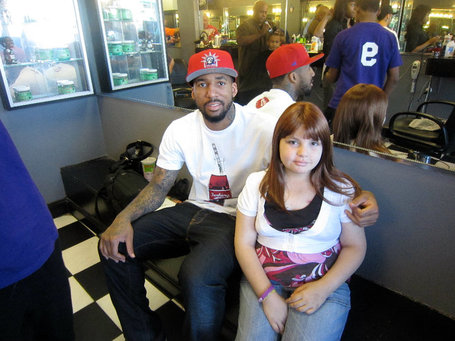 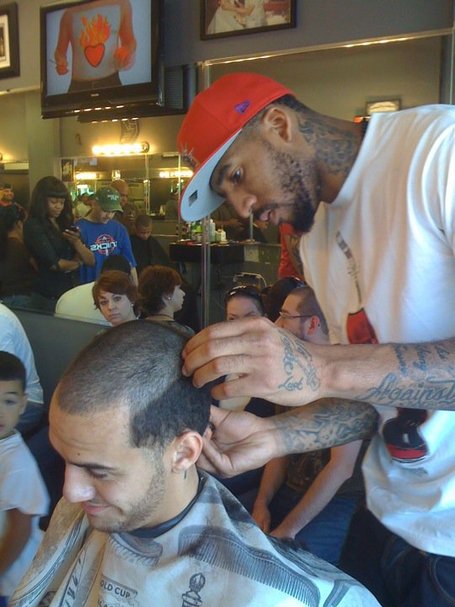 A brave soul allows Chandler to play barber for a day.

These are the types of stories that endear athletes to a city's community. I was a fan of Chandler before he came to Denver and hoped the Nuggets were going to be able to acquire him in any trade with the Knicks. After reading the above email I can only hope that Chandler and the Nuggets come to terms to keep him in Denver past this season. I can also understand why people like Jamie and Anthony would be disappointed to lose such a fine talent and great person.

And make no mistake, as much as a community can come to rally around a player for acts like this, a player can come to find the people around him to be like an extended family. In the big trade, the Nuggets fans lost a player they knew loved the city and fans in Chauncey Billups. There was talk about how Chandler may not have wanted to leave New York and I'm sure there were many reasons why he wanted to stay. The Michigan native had spent his college years in Chicago at DePaul and his 3.5 years in the NBA with the Knicks.

I hope the limited time he spends in Denver for the rest of this season will be enough to show him that his future with the team, the fans and the city is a bright one. The business side of professional basketball is an ugly one. Players leave teams about as often as teams dump players. But the relationships that players can form away from the basketball court can be rich ones that not only impact their lives, but countless lives around them.

This Nuggets team is showing signs of being a special one and players like Chandler are valuable assets to any squad. But no matter what he does on the court in the future, Chandler has already made a lasting impact off of it as a member of the Knicks.

And Chandler now has his biggest supporter with the Nuggets right here.

Click here for Anthony Donahue's interview with Wilson Chandler from Dec. 14, 2010 on The Knicks Blog where they discuss Chandler's controlled emotion, his favorite basketball movies and his pregame tunes.

2010-11 Game 62: Denver Nuggets 120 Charlotte Bobcats 80 - Kalen, Roundball Mining Company
Our friend Golden Nugget recaps last night's blowout and goes original with some Charlie Sheen references ... ha ha just joking GN! Sheen is everywhere, and like Michael Wilbon, I'm over it. Kalen has a nice point that I was thinking about as well with Birdman in his "Random Thoughts" section.

Magic coach Stan Van Gundy thinks Knicks got better of trade with Nuggets; Brewer, Azubuike waived - Frank Isola, NY Daily News
Van Gundy's Magic coming off a win against the Knicks when this one was written. A funny comment from Van Gundy about Timofey Mozgov holding up the trade.

DREXLER WARY OF SLAYING NBA'S GOLDEN GOOSE - Mark Woods, MVP247.com
The former Nuggets assistant coach talks about how the timing of this lockout could be horrible for the popular league.

Sefko: Would NBA really be worse off without Memphis, Charlotte, New Orleans? - Eddie Sefko, The Dallas Morning News
More contraction talk. David Stern said recently on Bill Simmons' podcast that contracting the Hornets is a real possibility as the owners only have to vote on it as they all now own the team.

Chat with John Hollinger - ESPN
The lone Nuggets question (despite my fantastic submissions!):

It's only been four games, but what do you think the chances are that Denver overtakes OKC for in the division? I like the defense we are suddenly seeing.

Overtaking OKC is probably a pipe dream, but I think there's a real chance Denver hangs on to the fifth seed in the West. The new Nuggets aren't as talented as the Melo-Billups group, but they're not as distracted either. End result, this is probably still a 46-ish win team. And I think their future remains pretty bright now that they're **finally** out of the Kenyon-induced cap hell that Kiki Vandeweghe left them in.