Share All sharing options for: Nuggets vs Wizards: Denver, Birdman soar to victory

Chris Andersen and the Denver Nuggets flew past the Washington Wizards 114-94. Birdman, Danilo Gallinari, a sick Ty Lawson and Big Al Harrington each scored 17 points to lead the Nuggets to victory. Birdman played 21 minutes and was a perfect 7-7 from the field, grabbed 11 rebounds (2 offensive), swatted 5 shots and had 2 steals tonight ... and the 17 points were his season-high.

Pictures of Captin Morgan at the Pepsi Center - click here. 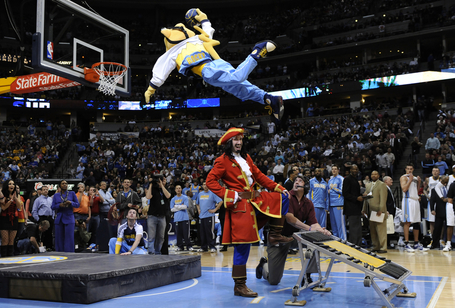 Check out the Nuggets players all watching the jam for charity.

I attended tonight's game with fellow Stiffs writer Jeff Morton. We watched the game from a suite and had plenty to discuss outside of tonight's contest as the Nuggets wrapped this one up early, much like they are doing to other sub .500 teams since the trade.

Slacker from Coyote Ugly summed up the night perfectly saying, "The game was effing amazing!"

The Nuggets grabbed the lead for good with 5:31 left in the first quarter as Nene made a layup in traffic to make it 17-16. Let's take a look at this one through some photos I shot with my trusty Droid. I swear the camera used to take better pictures ... I should have brought my camera! 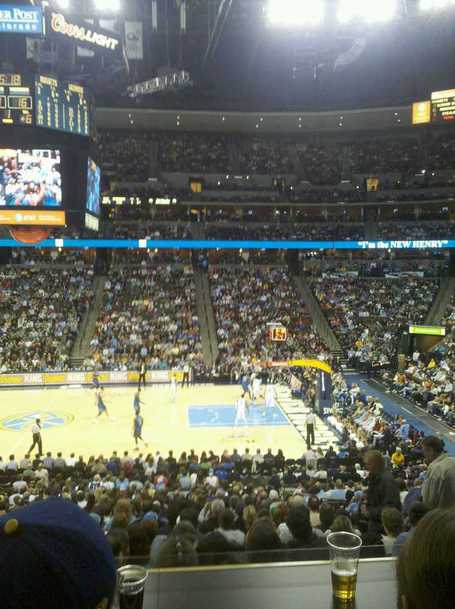 This first shot comes to you from the first quarter. Friday night games are always pretty popular, even if the Nuggets are playing the then 1-33 Wizards and now the 1-34 Wizards. Morton asked me during the game how the Wiz are so bad on the road ... I didn't have an answer for him.

One thing I did note to Jeff was that John Wall is a special player, but he hasn't figured out how to affect games as of yet. Tonight he had 13 points and 6 assists, but was a miserable 2-10 shooting. He did get to the foul line a bunch where he was 9-9, but Wall didn't have the same impact on the game that Lawson did.

Lawson was playing tonight's game under the weather, but his constant drives to the hoop and dishes made his 17 points and 6 assists a lot more impactful on the game. Of the many things the Denver point guards do well is make their opposition play the Nuggets' style. 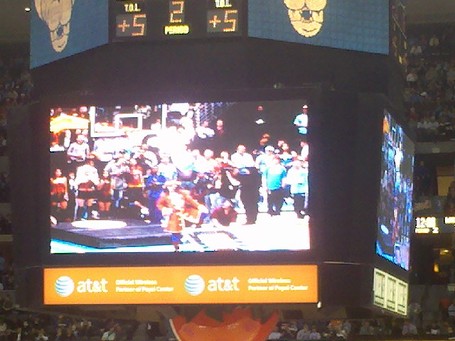 My Droid let me down a bit here as Rocky used a trampoline to dunk over Captain Morgan. The Captain delivered the game ball, got dunked over, made his way around the arena shaking hands and posing for pictures for the "One Million Poses" challenge and was very upbeat ... he added to the great atmosphere that has been present at the Pepsi Center this week as the Nuggets went 3-0. 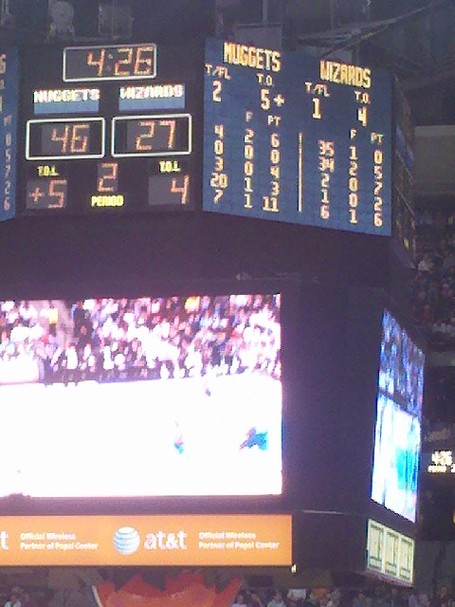 Harrington was needed as Wilson Chandler didn't play due to pain in his ankle (a chronic injury he's been dealing with all season). Al was cold from downtown (1-6), but did great inside and demonstrated nice body control on multiple layups at the rim. He finished 8-16 for the night and it's good to see Big Al get his game back a bit. By all accounts Al is well liked in the locker room and as a veteran presense on this squad, I'm sure his younger teammates are happy to see him playing well. 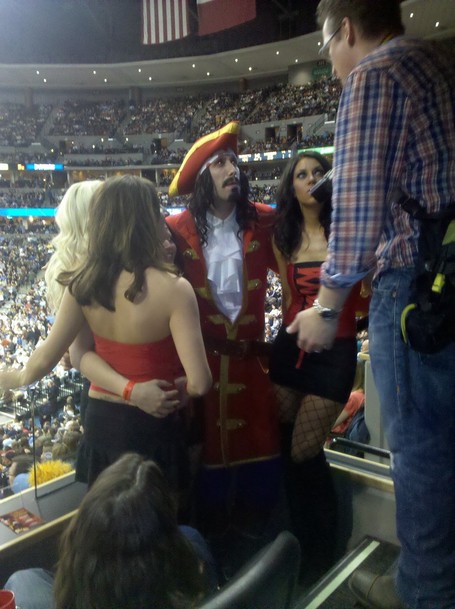 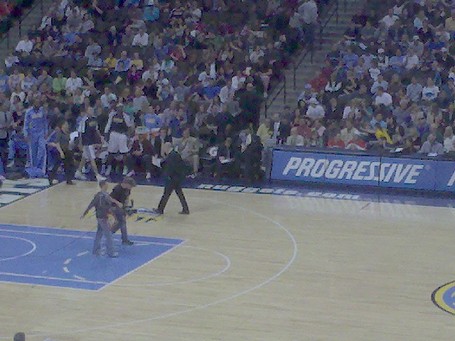 I grabbed this shot just before a George Karl timeout. Karl has been turning back the clock with this Nuggets squad and becoming Furious George once again with the officials. Karl lost his mind during the San Antonio game late and was really barking at the refs. Tonight was no different ... Karl was up often and getting verbal with the boys in light gray.

Karl has been coaching his butt off as he sees his players working hard for him and he's returning the favor in a more visual way on the sidelines. 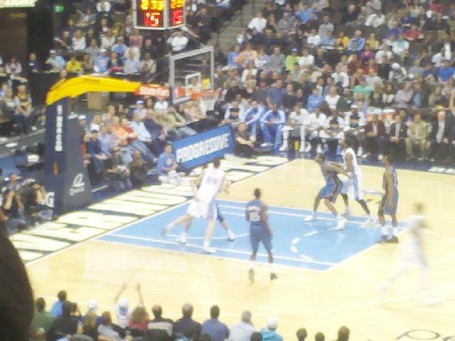 I'm not sure if Timofey Mozgov's pasty white skin made this photo blurry or if my Droid camera is just not that stellar. But the important thing is ... Moz played in the first half! He came in and picked up a couple fouls right away, but it was nice to see the big Russian get a little early burn. Maybe Karl got confused as to who he was on the bench becuase gone was the dry mop of hair on his head. Gallo and Mozgov both came out with a fresh haircut and some gel in their hair. Maybe Karl thought Moz was Gallo for a minute and put him into the game. 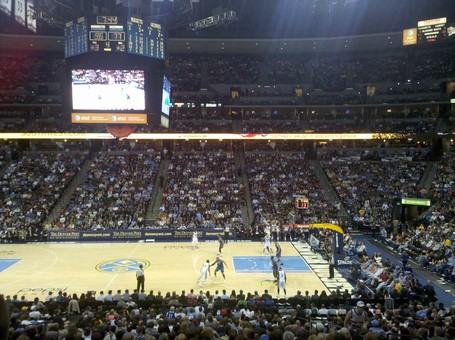 The game was over at this point with Denver up 96-77 with just under 8:00 minutes to play in the fourth quarter. Most of the crowd was still on hand, but folks did start heading for the exits at about the 5:00 mark. Jeff and I stayed until the end to give the Nuggets the ovation they deserved for once again taking care of business.

The Nuggets had such an easy time tonight that Kenyon Martin only played 20 minutes. K-Mart finished with 8 points, 5 rebounds and 3 assists ... he did get into foul trouble (4 total fouls), but luckily for Denver they didn't need his defensive presence late this evening.

Nene also got some good rest tonight playing just 23 minutes, scoring 10 points and grabbing 6 rebounds. The Nuggets big men didn't have much of an issue with JaVale McGee's 7-foot frame. McGee does force guys to think about their shots inside, but he didn't have much luck blocking anything tonight (0 blocks). 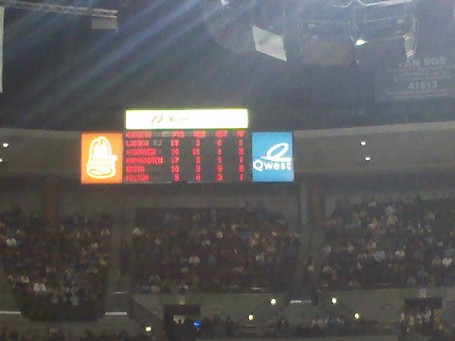 If anyone can read this ... I'll be surprised. I took it because at the time it read that Lawson had 6 assists, J.R. Smith had 5 assists and Raymond Felton had 8 assists. Smith added one more assist to give the trio 20 of the Nuggets' 29 total assists. Once again Denver moved the ball for open shots and made the extra pass time-and-again. Six players scored in double-figures for Denver and the Nuggets once again held their opponent under 100 points. 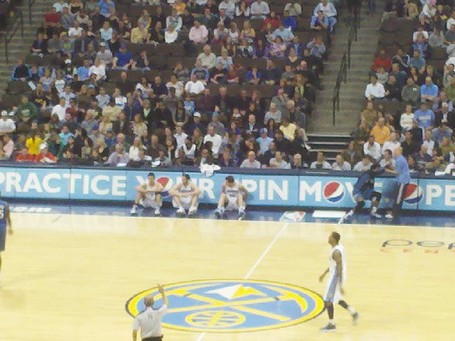 Gallo, Mozgov and Kosta Koufos get set to check in ... Moz and Koufos form Denver's blowout twin tower combination. Neither guy is particularly comfortable working in the post yet. Moz passed the ball out of the paint once to Koufos, instead of making a strong inside move to the rim. I've noticed both guys like to go across the paint and go for the little hook-shot when an up-and-under move or another post move to get to the rim would work better with their height. Nene is perfecting his post moves this season and hopefully they'll begin to rub off on the young big men. 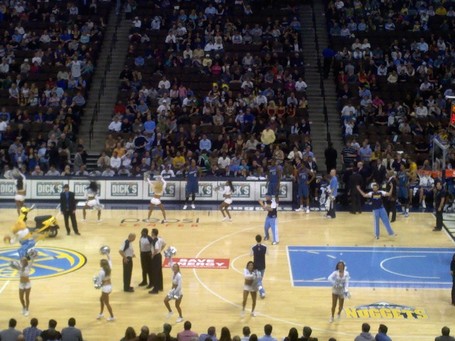 The greatest NBA mascot, Rocky, took a few attempts at his famous behind the head halfcourt shot. He missed against the Raptors, made it against the Spurs and missed it tonight against the Wizards. With Rocky and the Captain running around, the fans had plenty of action away from the floor during timeouts. Rocky even got to deliver a pie to the face of a Nuggets fan celebrating his birthday at the Pepsi Center during the second half. 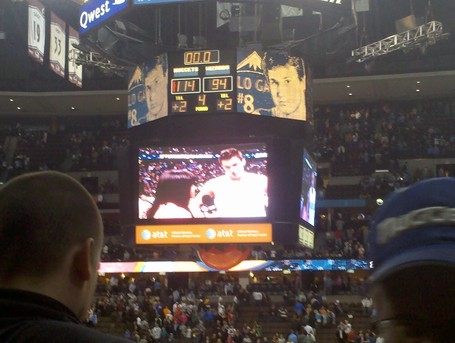 Gallo gave a nice postgame interview on the court with Maya Starks. At the end of the thing he shouted out, "Go NUGGETS!" and the Pepsi Center was elated. It was a great win for Denver, and an expected one. It's nice to see Denver wipe the floor with teams they should beat and do it early in the game as they step on sub .500 teams' throats.