During tonight's game Altitude sideline reporter Maya Starks informed us that the Nuggets were given Sunday off to watch the Super Bowl. Unfortunately for Carmelo Anthony, nobody apparently told his teammates they were back to work Monday night in the team's 108-103 loss to the Houston Rockets at the Pepsi Center.

Heading into tonight's contest, the Nuggets had won 77.7% of their games at the The Can. They had 21 wins at home in 27 tries. So, it figures the one night when my mom and step-dad are in town from the mountains and attend the game, the Nuggets put on a stink-fest.

Despite the Rockets doing all they could to allow the Nuggets to hang around tonight, Denver couldn't get out of their own way. The Nuggets turned the ball over 20 times, had only 14 assists, committed 31 fouls, shot just 30-43 from the free throw line and a miserable 3-13 from downtown. 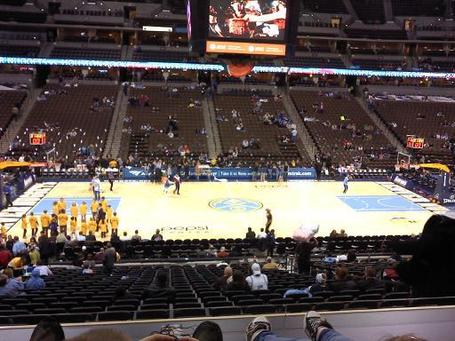 My mom's view, pregame, from a suite at Pepsi Center. Wish I could have been there.

In the preview I laid out the Nuggets' three-point shooting and free-throw shooting. Tonight's game aside, Denver had been pretty good in both areas all season. They ranked second in the NBA with their 39.2% shooting from downtown, tonight they shot just 23% from deep. Denver ranked fifth in the NBA with their team 79% shooting from the foul line, tonight they were a disastrous 69.7% from the charity stripe and left 13 points at the foul line in a 5-point loss.

Things got off to a weird start when I received a text from my mom asking me where Nene was. I didn't get home until about 7:15 p.m. and was playing catch-up with the game using my handy DVR or as I call it "Commercials Be Gone!" I caught a Tweet that read Nene had a sinus infection and Chris Marlowe of Altitude TV informed us that Nene would be sitting because of the flu. Al Harrington, not Shelden Williams, stepped into the starting role for Nene as the Nuggets would play small ball all night. Big Al started things off nice with a drive to the rim and an easy bucket. It'll probably be sometime after the lockout before we see Harrington at 100% and that sucks because he has a pretty nice drive when he actually uses it.

Chauncey Billups was using his sweet stroke early and hit two of his first three shots. With Aaron Brooks being suspended by the Rockets, they were forced to use 22-year old rookie Ishmael Smith as Kyle Lowry's backup. Billups took three jumpers in his 8:57 of playing time to start the game. I was hoping that Billups would try to draw some early fouls on Lowry to force the rookie into action, but Billups went down with a left-knee strain in the first quarter and would not return.

Ty Lawson, after missing the Minnesota game with a knee strain of his own, played 34-minutes and was pretty effective with 19 rebounds, 5 assists and 6 rebounds. There were times where Lawson was his usual push-the-pace and get to the rim self, but there were also stretches where he didn't demand the ball and deferred to his teammates too much to run the offense.

Before Lawson came to the team, I wanted the running Nuggets to obtain a push-the-pace guard not named Anthony Carter who could learn the ropes from Billups and be the point guard of the future. Now that Denver has that with Lawson it's as if his teammates are the ones who are not pushing the pace as much anymore. Too often Lawson is a one-man fast break and I'm not sure if it's because he just out runs everyone or if his teammates are just not willing to run as much. I really wish the Nuggets were able to acquire Tyrus Thomas when they had the chance. An exciting young big off the bench with crazy athleticism would have been the perfect fit with Lawson ... that is Ty Thomas and it was Chris Andersen in Birdman's early days in the league. The Nuggets need to focus on finding a young big man sometime soon.

As far as young bigs go, I was pretty impressed with Rockets rookie Patrick Patterson. The kid out of Kentucky didn't get much burn, just 8 minutes, but he might develop into a solid power forward or center in the League. He is only listed at 6'9'' and is just 21 years-old. Why the Rockets are using Brad Miller for 10 minutes a game is starting to look pointless as the Rockets are not winning a title this year, but should be developing their young talent. I don't know why Shane Battier is even on that team anymore, but he's probably great for helping out the younger guys on the team, just like Billups.

The thing tonight that wasn't good for any of the players, no matter what age, was the officiating. I was wondering if some of the refs were ever beaten as kids because tonight they seemed suspicious at the slightest of touching. They call ticky-tack touch fouls, they allowed contact inside, sometimes they didn't allow contact inside ... I don't know how the players didn't go mad because they couldn't get a feel for how the game was going to be called. Who likes to watch 78 free-throw attempts? Nobody! Let them play you assholes.

Speaking of playing ... at the half Melo had 20 points on 8-12 shooting and was the only guy who was able to really knock down shots for the Nuggets. The next highest scoring Nugget at the half was Big Al with 8 points. For the Rockets, Luis "Cut off my worthless left arm" Scola had 12 points and bench player Chase "Bread 'n" Budinger had 11 points including 3-4 shooting from downtown. Budinger, the former basketball and volleyball star at Arizona was taking the Nuggets apart from downtown and had a filthy dunk as well. Kevin "Scott Hastings hates my game" Martin had 7 points on just 2-8 shooting.

In the second half, Scola, Kevin and Melo kept it going and Budinger didn't score a second-half point. Scola continued to trick the Nuggets by using just his right hand to hit shot-after-shot and dropped in 13 second half points to finish with 25 points. Kevin started working his, jump into the defender offense, and scored 30 seconf half points to finish with 37 points. Melo dropped in 30 second half points as well and finished the night with 50 points on 16-24 shooting (66.6% ... Melo is the devil?). Melo had 6 rebounds in the first-half and 5 boards in the second to finish with 11 rebounds, but tallied 0 assists.

I can't wait for the next game ... this one felt like the Rockets had a 30-point lead and the Nuggets didn't really play with any urgency and the Pepsi Center crowd was about as alive as the Pittsburgh Steelers' after-party last night. I wonder if my mom can get a refund for that game because she shouldn't have to pay for the Nuggets' Super Bowl hangover.