Share All sharing options for: Hawks at Nuggets recap: Best night ever... 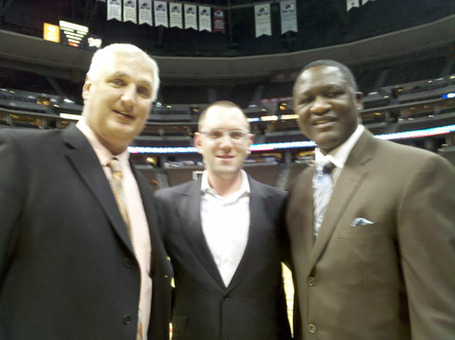 (Geeking out with Scott Hastings and The Human Highlight Film)

It's not every day when you get to meet your childhood sports hero and watch your favorite team delivery a victory in the same night.

Even though I've grown to become a jaded, cynical sports blogger, I will forever remain an NBA geek at heart. Anyone who knows me well knows that I had two loves as a young NBA fan: the Denver Nuggets and Dominique Wilkins.

There aren't many perks of being a sports blogger. Trust me, it certainly isn't the pay. And I rarely - if ever - use whatever minuscule blogging credibility I have to ask favors from those involved in the NBA. But knowing I had tickets for the Hawks annual visit and knowing I'd actually be in town to watch them play, I had to at least try to meet my childhood sports hero given that he's become a Hawks' TV analyst. And the best person to ask that favor of was none other than Altitude broadcaster, radio host and former Hawk Scott Hastings. Hastings was kind enough to introduce me to 'Nique an hour before tipoff on Monday night, and I can't thank him enough for doing so. It's probably a sad commentary on my life, but the 30 or so minutes I spent tonight with The Human Highlight Film will forever be one of my greatest memories.

Similar to how many kids become fans of teams or players that don't reside in their home city, I became a 'Nique fan for a pretty bizarre reason. As a young kid, I spent many Sundays at my friend (and Denver Stiffs reader) Mordecai's house where we'd watch the NBA on CBS. As a seven year old during the 1983 NBA Playoffs, we watched the Hawks take on the Celtics in the first round (a series the Celtics would go on to win 2-1). With Mordecai's dad being from Boston, the entire household was rooting for the Celtics. Always the contrarian and with red and yellow being my two favorite colors, I decided I'd be a Hawks fan and root against the Celtics. And it just so happened that the Hawks had a dynamic, talented rookie small forward who was thrilling to watch. That, of course, would be Dominique Wilkins. From that day forward, I would forever be a 'Nique fan and the only time I ever rooted against him was when the Hawks played the Nuggets (but I'd still root for 'Nique to score 30 against us).

But despite my family having season tickets throughout 'Nique's era, I never got to meet my sports hero (my Benedict Arnold Lakers fan of a little brother, conversely, got to meet his hero Magic Johnson before a game at McNichols Arena when my brother was eight years old). I tried in vain many times to score an autograph from #21 during pre-game warm-ups, but it just never happened.

Well, I didn't get an autograph on Monday night (I might be a geek, but the days of asking other adults for autographs are over) but I did one better...I got to spend about a half hour talking all-things-NBA with The Human Highlight Film himself. And for much of the conversation, we were joined by Hastings which gave me a front row seat to two old school guys talking about how much tougher and better the NBA was back in their day. Even Bill Hanzlik joined us for a few minutes and swapped stories with 'Nique about playing five days in six nights......while flying coach.

And you know what? They're absolutely right. The NBA was better back then. A hell of a lot better. But with the lockout looming, the NBA has the opportunity to make things right again.

I've previously written that the best season in NBA history was the 1987-88 campaign (the last season with a 23-team league). And after coming out of one of the worst weeks in NBA history - a week that saw Carmelo Anthony force his way onto the Knicks and the Jazz trading Deron Williams to the Nets for fear he'll do the same next season - I couldn't help but wish it was 1988 all over again. The details of why will be laid out in my next SB Nation column, but the gist of my argument is that in 1988 virtually every team had players that were worth the price of admission to see play (even today, I can rattle off the names of the stars on all 23 NBA teams from 1987-88...like the two Malones on Washington, Hakeem on the Rockets, the X-Man on the Sonics, etc). And yet today, with more and more stars colluding to join just a handful of teams, almost 20 of the NBA's 30 teams could soon become irrelevant on a national scale.

So in many ways it was fitting to meet my all-time favorite small forward a week after one of my all-time favorite small forwards got traded. Come to think of it, all my favorite small forwards left in a way I never approved of. In 1994, the Hawks screwed 'Nique by shipping him to the Clippers on the eve of the trade deadline for Danny Manning. At the time, the Hawks had the Eastern Conference's best record and ended up losing in the playoffs' second round. They've been cursed ever since and may remain cursed into the future. Four years earlier in 1990, the Nuggets passed on re-signing their best player ever, small forward Alex English, and allowed division rival Dallas to sign him. One year later - and a just a year removed from averaging 17.9 ppg here in Denver - a brokenhearted English was out of the NBA altogether. And last week, the Nuggets famously gave up on Melo (his choice, not theirs) in exchange for a collection of solid if not spectacular players.

Point being, while Wilkins and English were cruelly shipped out by their respective franchises, at least it wasn't their decision. They played in an era where making millions from your franchise was good enough to keep you around, regardless of location. It was an era where superstars earned their loyalty from the fans by building relationships with them for almost a decade within one community.

Speaking of those not-so-spectacular players that Denver obtained a week ago, our new-look Nuggets delivered another great show to the fans at Pepsi Center on Monday night. Similar to their victory over the Celtics last Thursday, the Nuggets were able to overcome a rusty first half and put together an energetic second half that eventually left he Hawks flat-footed. I of course couldn't hear the Hawks' broadcast, but I'm sure 'Nique was impressed with Kenyon Martin's leadership, Raymond Felton and Wilson Chandler's gamesmanship and J.R. Smith's one-ups-manship off the bench.

As news of the Melo trade came out last Monday, many questioned who would be the Nuggets emotional leader and who would be the starting point guard in the wake of Chauncey Billups' departure alongside Melo's. Both questions may have been answered on Monday night with K-Mart demonstrating that he can be the emotional heart and soul of the team while Felton should be the starting point guard. I've long been a Ty Lawson fan, but as one of the league's best - if not the best - backup point guards.

Amazingly, the Nuggets were able to dish out 22 assists while committing just six turnovers against Atlanta. And despite missing 11 of their 14 three-point attempts, the Nuggets hit the century mark in scoring by making almost 50% of their field goal attempts. Of course, it helps when your opponent is on the second of a brutal back-to-back, is missing its star small forward for the entire second half and hasn't yet integrated its new starting point guard. But the Nuggets were missing Danilo Gallinari and still pulled out an impressive victory. And the fans have taken notice. Rather than see fans leave in droves towards the end of the fourth quarter, most stayed until game's end to stand and cheer this team on. And I'm sure an old school guy like 'Nique appreciated the Nuggets tireless fourth quarter effort.

And that's the way it needs to be again if the NBA is to find tomorrow's geeks - like me - to support this league into the future.