Share All sharing options for: Big Night at Big Game was Big Fun...

Those fortunate enough to attend Tuesday night's "Big Night at Big Game" hosted by the Denver Nuggets (with proceeds going to various charities) had a great time.

Jeff and I had the privilege of mixing things up with Nuggets players, coaches, executives and media at Wednesday's "Big Night at Big Game".  Despite the cloud of Carmelo Anthony's imminent departure hanging over the event (and being talked about by everyone there), everyone - including Melo but excepting head coach George Karl who was still seething over the Nuggets bad practice - seemed to be having a great time.

The Nuggets organization did a great job putting this event on.  I've been to a number of Nuggets events, and I've never seen the players this accessible.  Rather than be roped off to the side in a VIP section somewhere, the players mingled with the crowd throughout the night.  As to be expected, the more popular players like Melo, Chauncey Billups and Chris "Birdman" Andersen were swarmed by the fans more than other players, but if you were persistent you could get at least a handshake or an autograph from any of the players.

Neither Jeff nor I spoke with Melo directly, but our friends Russ and Vicki (of "Vicki's Husband") fame did and took the pictures you see below.  Jeff and I did get to speak extensively with Nuggets soon-to-be owner Josh Kroenke and new general manager Masai Ujiri, both of whom were in great spirits all things considered.  And no, we didn't get word one way or the other on Mikhail Prokhorov possibly coming to Denver to meet with Melo this week.  The only players we conversed with were Afflalo (nice as always), Gary Forbes, Chris Andersen and J.R. Smith.  Ujiri asked Jeff and I if the Nuggets should re-sign Forbes (in front of Forbes!) and of course we said a very sincere "yes!"

Live on site were our friends Renaud Notaro and Karl Hungus from Mile High Sports Radio's Elephants in the Room show, and I got to do a segment with them after Arron Afflalo came on their show.  I'll try to get MP3s posted of both my appearance as well as Nuggets head coach George Karl's (who clarified his comments about possibly benching Melo), Afflalo's and Ujiri's.

Overall, fun was had by all.  My only regret was that we didn't have more Stiffs there.  I'll be sure to reach out to the Nuggets more in advance of next year's event and see if we can get a Stiffs contingency together.  This event was definitely worth the price of admission! 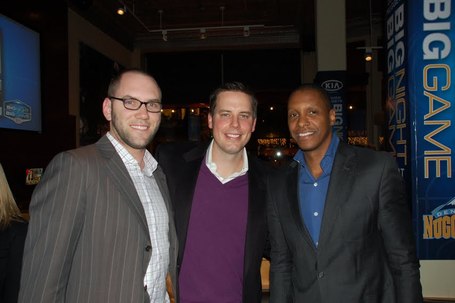 Yours truly with the Nuggets brain trust: Josh Kroenke and Masai Ujiri. 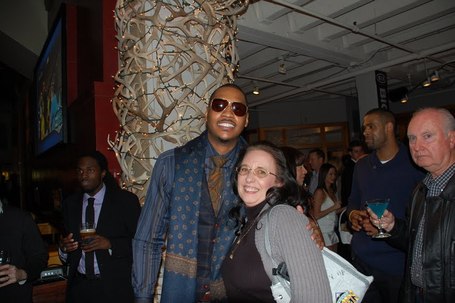 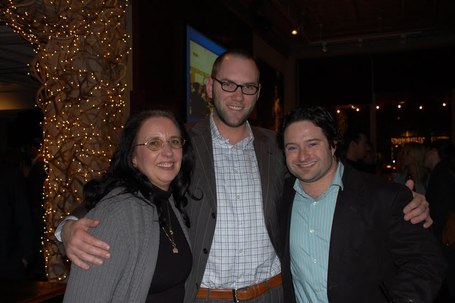 Yours truly with Vicki and reporter extraordinaire Benjamin Hochman.