Heat vs. Nuggets recap: Melo Era winding down with a yawn...

Share All sharing options for: Heat vs. Nuggets recap: Melo Era winding down with a yawn...

I guess Nuggets fans can thank Miami Heat superstar LeBron James twice now.  First, for hijacking the entire city of Cleveland, serving as a wake up call to the Nuggets organization to move Carmelo Anthony elsewhere should he not sign the contract extension offered to him to stay in Denver.  And second, for sitting Thursday night's game out with a sprained ankle, ensuring that a sold-out Pepsi Center would be deprived of it's only chance to see James in person...and, of course, boo that talented jerk.

James sitting out, combined with the Heat arriving early on Thursday morning after a dogfight with the Clippers in Los Angeles the night before, ended up with the Nuggets being on the right side of a blowout for the second game in a row. The Nuggets 130-102 blowout was a yawner almost from the start, and once again the Nuggets faithful were teased and tantalized by what this team could and should be, were it not for you-know-who insisting on playing elsewhere.

And thus, despite the elation that should come from every Nuggets victory, the gloomy shadow of Anthony's imminent departure - and possibly Chauncey Billups' too - lords over this franchise.  Entering Thursday night's action, I thought the matchup against the Heat could be Melo's last in a Nuggets uniform.  But while speaking with the press in the locker room post-game, Melo guaranteed that he'd be in uniform for the Nuggets' Saturday game against the dreadful Cavaliers and again when the Nuggets visit San Antonio on Sunday evening.  Beyond that, no guarantees were issued.

Being your trusted Nuggets blogger, I've been deluged with text messages, phone calls and - on Thursday - by passers-by at Pepsi Center all claiming that they have the inside scoop on this Melo deal.  All second, third and, sometimes, fourth-hand information, I've "heard" everything from Melo and Chauncey being shipped to New Jersey on Friday morning to the deal consummating after the Nuggets visit the Nets on January 31st and everything in-between.  One text-er insisted that the deal is going down after next Wednesday's Thunder game at the latest.  Another swore that the deal will be done after the Lakers game on the 21st.

Regardless of when the deal is finally completed, it's apparent that a deal will be completed.  And, ultimately, it will be to send Melo (and Chauncey) to the New Jersey Nets.

Hearing all this - and being lucky enough to sit just two rows behind the Nuggets bench tonight - I tried to study the body language between Melo and his teammates to deduce just how imminent this deal is.  And while I have nothing revolutionary to share with my fellow Stiffs, I must use the same analogy I used previously regarding this Melodrama.  Watching Anthony play and his body language throughout these games, I can't help but think of the high school kid who knows where he's going to college before his spring semester begins, so he just goes through the motions throughout his final high school semester.  That's Melo right now: going through the motions but not playing particularly hard or with the acute sense of concentration required to be a champion in the NBA.  Melo is still missing chip shots around the rim at an alarmingly bad rate and settling for too many jump shots.

Luckily for Melo and his Nugget teammates, the Heat stink against decent teams (now 8-9 against plus-.500 teams) and clearly suck against decent teams if one of their "big three" is absent.  Talk about going through the motions...the Heat were like the walking dead on the Pepsi Center floor Thursday night and had waved the white surrender flag midway through the second quarter.

For me, the highlight of the game was meeting Denver Nuggets legend David Thompson, thanks to an introduction made by my good friend and Nuggets broadcasting legend Al Albert (pictured with Thompson and me below).  Thompson was on hand because he was honored before tipoff, proving that maybe the Nuggets marketing brass are finally listening to my rants about this franchise having no connection to its history.  Once Melo and Chauncey get shipped out, I suspect the Nuggets will have only their history to hang their hat on for a while.

Thompson's best seasons came before I was old enough to remember watching him play, but his presence at Pepsi Center Thursday night was a reminder that the Nuggets have had Golden Eras before and will have Golden Eras again.  Most unfortunately, the Golden Era we're experiencing now is about to be ended prematurely. 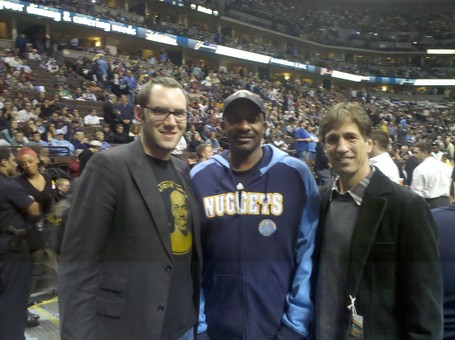 Your trusty blogger hanging out with Nuggets legends David Thompson and Al Albert.

The View From Behind the Nuggets Bench...

...when Carmelo Anthony was introduced, 30% of the Pepsi Center crowd booed him and 70% cheered him.

...the crowd was louder than normal when Chauncey Billups was introduced.

...the word was that the Nuggets didn't sell the game out until just before tipoff, so it wasn't surprising that LeBron James' absence wasn't announced until the last possible moment.  Nate fired off a text to me well before tipoff guaranteeing that LeWuss wouldn't play.

...Nuggets assistant coach Melvin Hunt does all the talking and pep talk during timeouts prior to George Karl addressing the team.

...Al Harrington is clearly the team's funny side and never seems to take himself - or anything - seriously while sitting on the bench.  Gotta love Big Al.

...the second quarter was all Ty Lawson, and the Nuggets never looked back.

...when Melo missed an errant three-point attempt near the end of the third quarter, the crowd booed him.

...near the five-minute mark in the fourth quarter, Karl called for Anthony Carter to go into the game.  Carter declined and it didn't seem to bother the coaches.

...many fans in our area begged for Shelden Williams to get inserted into the game, and Karl eventually obliged.

...Renaldo Balkman was nowhere to be found until I saw him (and I'm not joking here) wearing street clothes and hiding behind a black curtain on my way out of the arena towards the Blue Sky Grill.

-Ty Lawson and J.R. Smith: J.R. had all the highlights in this game, but it was Lawson who spearheaded the Nuggets second-quarter run that proved to be the catalyst for the Nuggets blowout victory.

-The entire Heat roster not named Wade or Bosh: The Heat proved Thursday evening why they're not winning a championship until better role players are added to the team.