The Nuggets starting center has overcome a lot in his young life with injuries and cancer. Now the only thing standing in Nene's way from becoming a dominant big man in the NBA is himself. Can the Nuggets best inside presence make another leap this season that we keep expecting and hoping for? We'll find out soon.

Contract status: Nene has 2 years and roughly $22.9 million remaining on his deal.

Overview of 2009-10 season: Nene was the Nuggets' consistent inside presence throughout last season, and the Denver's most reliable post player. The undersized center again used his unusual athleticism to and ability to finish with both hands as his best weapons. Once considered to be injury prone by some, the Brazilian has only missed six regular season games the past two seasons (none last year). Along with Nene's consistent numbers is his consistent hair style, I'm hoping the latter will change sometime soon. 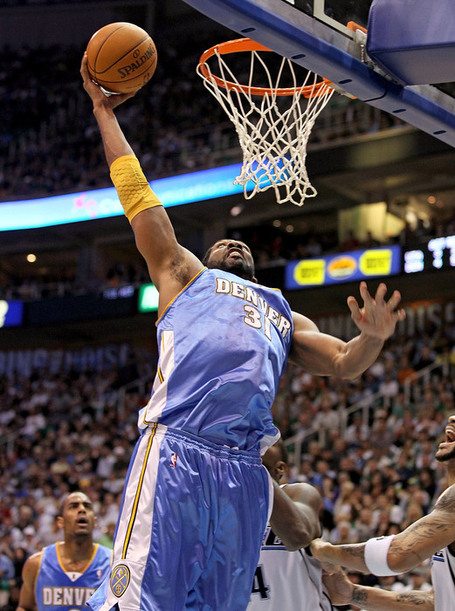 Nene is a force when he's attacking, but he has yet to maintain that aggression.

Positives / What he brings: Nene playing center gives the Nuggets a non-traditional starting five. Listed at 6'11'' I don't think many Nuggets fans buy that he's much taller than 6'9'', although he makes up for his lack of height with tremendous strength and quickness. Nene has developed a more consistent jump shot during his career, hits free throws with regularity, and can finish with either hand in the post. Defensively the Brazilian was more of a force blocking shots and rebounding last season than in years past. Nene's strength allows him to play bigger guys without really needing help and Nene is always a threat to jump the passing lane and start a quick fast break off a steal.

Negatives / What needs to improve: Nene's at his best when he's treating the rim like a game of Whac-A-Mole and he struggles when he plays the game like touching the orange cylinder is still illegal. Another thing Nene loves to do is to allow the referees to get in his head. His constant complaining makes him look like The Boy Who Cried Wolf, and because of that when he has a legitimate complaint he's rarely taken seriously. Nene will be just 28 years-old when the season kicks off and still has room for improvement in many areas of the game, but does Nene have the desire to get better and be an elite big-man out West? That remains to be seen.

Outlook for 2009-10 season: As I noted above, Nene should be playing his best basketball over the next 2-3 seasons and it will be key for the team to see a motivated Nene. There are many times where I just want to figure out what will anger the big guy the most and put that in front of him like a carrot on a string. Nene has the talent to average close to 20 points and 10 rebounds, but does he have the proper mindset? Another thing that hurts Nene is the lack of touches he sees thanks to playing with talented players that like to shoot the ball. Foul trouble can also plague Nene and perhaps he doesn't have the same freedom of other big men in the league with the officials, but none-the-less it's important for him to remain on the floor. So, will we see more of the 20 and 10 Nene or the 13 and 7 guy we saw last season? It's up to Nene to determine how much he wants to be an elite big in the League.