Masai Ujiri will be the new Nuggets general manager

Share All sharing options for: Masai Ujiri will be the new Nuggets general manager 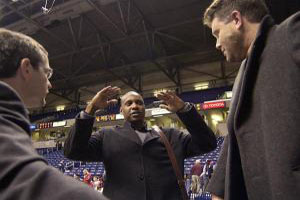 With the imminent hiring of Masai Ujiri as the Nuggets general manager, perhaps the new three-headed monster is born as Josh Kroenke, Bret Bearup, and Ujiri will be working together to form the core of the Nuggets front office. Ujiri is a relative unknown name to the casual fan, but all signs point to the 39 year-old being a bright, young NBA mind.

For a quick background on Ujiri why not steal a bit from Andrew's article on August 24th titled And by the way, we still need a general manager...:

A former four-season scout for the Nuggets, the Nigerian-born Ujiri has spent the last three years with the Toronto Raptors organization as the team's assistant general manager under Bryan Colangelo.  Though the Raptors haven't experienced much on-the-court success during Ujiri's tenure north of the border, they have brought in an assortment of quality international players - such as Jose Calderon, Andrea Bargnani and Carlos Delfino - knowing that to stay competitive with their American-based NBA brethren requires thinking outside of what's the norm for American NBA teams.

Unlike Griffin and the Nuggets third likely candidate, Tommy Sheppard, Ujiri played professional basketball...albeit overseas in Europe.  But doing some snooping around online about Ujiri, it turns out he's well regarded for his international basketball acumen, notably African and European players,  Clearly a go-getter, the young Ujiri has already served as director for the NBA's "Basketball Without Borders" program.

Readers of this site have long been concerned about the Nuggets lack of international scouting and Ujiri would seem to fill that gap well.

Here is a little article off NBA.com from 2005 talking with Uijiri and others about International Scouting.

Denver wasted little time grieving the David Griffin loss, who apparently turned down the opportunity to become the general manager, and hired Ujiri in less than 24 hours after the Griffin news was reported.

So, some people will call this hiring Plan B and hang on to the theory that Griffin was the right hire, but what did we really know about Griffin that led us to believe he was the guy for the job and Ujiri is not the right guy? Before Griffin's name came up on the Denver radar I don't recall anyone anxious for the Nuggets to grab him up.

I like the fact that with whichever guy Denver was going with they were looking for a younger mind to come in and grow with the organization. Ujiri was around with Kiki Vandeweghe's regime and should be very familiar with all things Nuggets, and it wont take him long to get into a groove. And the Nuggets can't wait for Ujiri to get his feet wet as he's being tossed right into a team that is changing parts on the fly with J.R. Smith being on the trade block, Melo's situation, and other trade options (Kenyon Martin) and contracts coming to an end (Chauncey Billups).

The aspects I really like about Ujiri: he's a former player, is very well respected as a bright mind, and is young and can relate to the players he'll be working with. When the Broncos hired Mike Nolan to clean up the defense last season I was happy that Denver got a big name but I knew was going to be a short term guy. This hire seems to be a long-term one and that is good for stability, which is good for the organization. Ujiri's history with the Nuggets should also come in handy as he should know plenty of faces on the team and probably has some ongoing relationships with our current players.

Steve Kerr gets a lot of credit for building the Phoenix Suns, but Kerr's predecessor Bryan Colangelo built the original "Seven Seconds or Less" Suns and has been running things in Toronto along with Ujiri. Obviously things in Toronto are not what people want to point to and say "that's a success story," but the Raptors didn't have Steve Nash (whom Colangelo signed away from the Dallas Mavericks).

Now, before we go pointing fingers at Ujiri being the one who wanted to draft Nikoloz Tskitishvili in 2002 ... Ujiri didn't actually join the Nuggets until 2003 -- so in theory he could have talked Vandeweghe out of that atrocious pick. But we don't know too much about Ujiri and we also don't know how much power he will have with the Nuggets now.

The last few seasons Denver was publically a three-headed monster with Mark Warkentien, Rex Chapman, and Bret Bearup running the show. But behind the scenes we found out that Chapman wasn't even registered as an official designated NBA negotiator as those responsibilities fell to Warkentien and Josh Kroenke.

We can assume that Josh Kroenke will retain that position and Ujiri will probably take over that role in Warkentien's place. But how much power will Ujiri have?

The issue of Griffin not accepting Denver's offer is said to be that of money, but there also may have been some desired power that Griffin wanted ... all speculation on my part. Is Ujiri more willing to work alongside Josh Kroenke and Bearup with personnel decisions?

One thing is for sure ... the Nuggets youth movement in the front office is now complete. Josh Kroenke at 30 years-old and Masai Ujiri at 39 years-old form a young owner/management team as the elder statesmen Bearup will surely continue to play a key role with the organization.