And by the way, we still need a general manager...

Share All sharing options for: And by the way, we still need a general manager... 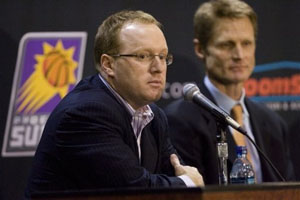 Lost in the kerfuffle over the "will-or-won't Carmelo Anthony stay in Denver?" fiasco may be a story of greater impact to Nuggets fans and the future of the franchise.  That being we still need a general manager...

How does this sound for a job description for the Nuggets open general manager position?

You'll be responsible for re-shaping the future of an NBA franchise whose best player may or may not want to stay in town (despite being offered a $65 million extension), whose collective player salaries for 2010-11 exceed the luxury tax line by more than $6 million, whose star point guard is nearing 34 years old, whose head coach and coaching staff are on a one-season contract, whose best bench player is alleged to be on the trading block already and whose roster may have as many as 10 vacancies entering the 2012-13 season.

But while this might sound like a job that would send any sane person running for the hills, becoming the Nuggets next GM actually offers much promise.  Lest we forget that the Nuggets are just a year and three months removed from almost appearing in the NBA Finals.  And, notably, are just seven or so months removed from being the second-best team in the Western Conference.  In fact, the Nuggets were so good in early February that they were able to beat the Lakers in Los Angeles without Carmelo Anthony.  Additionally, after Kenyon Martin's onerous contract expires at the conclusion of this upcoming season, the Nuggets will have the cap space flexibility to bring in decent players to surround their quality young players with.

And thus, whomever steps into the GM position is faced immediately with a daunting decision to make.  Do you a) keep Melo in Denver for the remainder of the 2010-11 season, hope the team gets off to a great start, hope a trade presents itself to improve the team along the way and push for an NBA Finals appearance with essentially the same team that got you on the doorstep of the Finals in 2009?  Or do you b) get what you can for Melo now that the Nuggets have some leverage, let Kenyon Martin's and Chauncey Billups' contracts expire at season's end and start rebuilding for the future?

This decision will have to be made by one of the following names mentioned below, with final say landing in the office of Nuggets owners Stan and Josh Kroenke (the younger Kroenke reportedly met with Melo in Baltimore today to discuss the star's future in Denver).

The question for us, Nuggets fans, is who would we hire?  (I've created a poll here if you'd like to participate.)

Griffin's name has been most discussed as the frontrunner for the Nuggets vacant GM position, but we've heard nothing about an imminent signing of Griffin for over a week now.  Should Griffin join the Nuggets, he'd be coming by way of Phoenix where he spent 13 years in the Suns organization co-building and managing a franchise that routinely made the playoffs and played in the conference finals during his tenure.

Knowing Griffin may soon become the Nuggets next GM, I reached out to my colleague Seth Pollack from SB Nation's Bright Side of the Sun blog to get his thoughts on Griffin.

According to Pollack (who knows the Suns organization better than most SBN'ers know theirs), Griffin "is fantastic.  A great mix of old school talent evaluation, modern advanced statistics and he's a firm believer in the value of chemistry. I saw today that J.R. Smith might be on the market. No surprise if Griff is indeed taking over.  J.R. is exactly the kind of player he wouldn't want on his team.  His track record with the Suns speaks for itself.  Both Marion and Amar'e were number nine picks, getting Barbosa from the Spurs and, of course, Lopez and Dragic.  Free agents like Frye, Amundson, Hill and the trade for Dudley and J-Rich [Jason Richardson] also came on his watch which really took off when [Steve] Kerr took over. On the flip side, he was rumored to be partially responsible for the Marcus Banks signing and Diaw extension while [Mike] D'Antoni was GM.  Overall, he's a smart guy who had great relationships with players and media. We were very sad when he left."

A former four-season scout for the Nuggets, the Nigerian-born Ujiri has spent the last three years with the Toronto Raptors organization as the team's assistant general manager under Bryan Colangelo.  Though the Raptors haven't experienced much on-the-court success during Ujiri's tenure north of the border, they have brought in an assortment of quality international players - such as Jose Calderon, Andrea Bargnani and Carlos Delfino - knowing that to stay competitive with their American-based NBA brethren requires thinking outside of what's the norm for American NBA teams.

Unlike Griffin and the Nuggets third likely candidate, Tommy Sheppard, Ujiri played professional basketball...albeit overseas in Europe.  But doing some snooping around online about Ujiri, it turns out he's well regarded for his international basketball acumen, notably African and European players,  Clearly a go-getter, the young Ujiri has already served as director for the NBA's "Basketball Without Borders" program.

Readers of this site have long been concerned about the Nuggets lack of international scouting and Ujiri would seem to fill that gap well.  Additionally, having just been Bosh'd in Toronto, Ujiri could bring the Nuggets some much needed guidance and assistance when it comes to dealing with "will-he-or-won't-he-stay" star players like Bosh, Melo and so forth.

I remember Sheppard when he worked for the Nuggets 15 or so years ago and he knew many of the season ticket holders on a first-name basis.  No one will question Sheppard's love of the game, people skills and intelligence.  But it's his basketball acumen that I'd like to know more about.  Not a former player himself, Sheppard has transitioned from a PR-type guy to a basketball administration executive while working for the Washington Wizards.

According to the Wizards official website, "Sheppard assists with the day-to-day operations of a basketball department that brought three All-Stars in Gilbert Arenas, Antawn Jamison, and Caron Butler to Washington, and added veteran experience to the Wizards’ core with Mike Miller, Randy Foye, Fabricio Oberto and DeShawn Stevenson."  I'm not sure I'd be bragging to anyone about adding DeShawn Stevenson.

In many ways, Sheppard could be the anti-Mark Warkentien if he ends up back in Denver.  Where Warkentien was prickly with the media and hid in his office during games, Sheppard is known for welcoming the media with open hours (perhaps Denver Stiffs could finally get credentialed?) and being overly gregarious - not a bad thing, I might add - with the ticket-paying fans.  The question, of course, is how well can Sheppard evaluate talent?

Other names have been leaked to the media including the Kings' Jason Levien and the Hawks' David Pendergraft, but all roads seem to come back to Griffin, Ujiri and Sheppard to fill the Nuggets GM vacancy.  If it were up to me, I'd go with Griffin.  Not only does he have the experience of building a competitive, championship-caliber team in the brutally tough Western Conference but, perhaps most importantly, he's a former blogger!

Regardless of whom the Nuggets ultimately hire, let's just hope it's handled sooner than later.  The Nuggets laundry list of to-do's - ranging from the Melo situation to negotiating George Karl's next contract - is long and extensive.  And it might not be a bad idea for the Nuggets to have a fresh pair of eyes making decisions alongside the current upper echelon of team management.