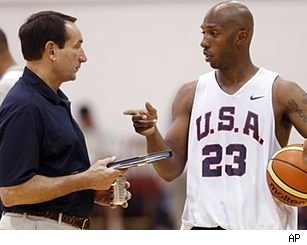 With little Nuggets-related news to analyze these days, it's good to see Chauncey Billups leading a team of young guys as Team USA prepares for the 2010 FIBA World Championships in Turkey.

Who's going to be left behind in Vegas? Here's who is on the Team USA bubble - ESPN
ESPN.com's Chris Sheridan calls Billups Team USA's "unquestioned leader."

NUGGETS: Williams sees opportunity to shine in Denver
Aaron Lopez of Nuggets.com gets up close and personal with new Nuggets Shelden Williams.

2010 Fortunate 50 - SI.com
Melo ranks 25th on SI.com's list of the top-50 highest paid American athletes.  I want to know how Melo is getting $6 million a year in endorsement dollars.

Shaq Wants to Wear Celtics Green -- NBA FanHouse
So much for my pipe dream of Shaquille O'Neal having his fairwell tour in a Nuggets uniform.