Chris Andersen's nickname, the Birdman, reflects his talents as his flying ability allows him to block improbable shots on defense and on the offensive end to make crowd pleasing dunks. But what the Nuggets are going to need next season is for the Birdman to have a Phoenix type rebirth and rise to new heights out of last season's ashes.

Contract status: Andersen has 4 years and roughly $17.5 million remaining on his deal.

Overview of 2009-10 season: Andersen battled injuries for most of last season as it looked as though the Birdman was out to prove (or was asked to prove) that he was more than just an energy guy last season. I don't know if Andersen was actually heavier last year, but it did seem that Bird was huffing-and-puffing a bit more and he also looked a little thicker last season around the waistline. Bird somehow only missed six regular season games and that's a true testament to his character. It pretty much got to the point last year that I thought the coaches should have refused to play Bird (as he'd never bench himself) as Johan Petro was looking more effective. Bird stepped his game up last season rebounding and as he took on more of an offensive load and was one of Denver's more reliable shooting bigs. And to say Andersen was a reliable shooting big is not saying much as the Nuggets didn't really have that knock down shooting big on the roster that they may now possess with Al Harrington. With the addition of Harrington, Denver might be able to use Chris more as he's needed: the energy guy off the bench who will give you 100% hustle for the time he's on the floor. 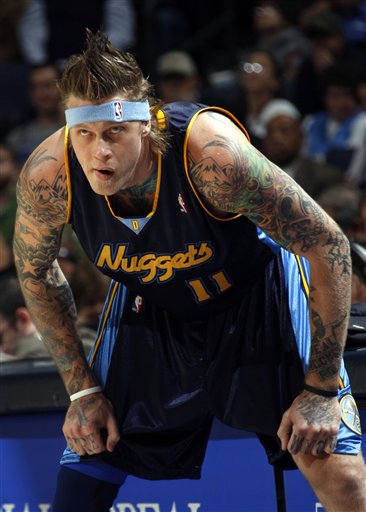 The Nuggets will need a healthy and re-energized Birdman this upcoming season.

Positives / What he brings: Andersen is the key role player that every good team needs. Chris is best when he can come off the bench and release pure hell on the court from the moment he takes off his warmups to the moment the crowd stands and applauds his efforts as he walks off the floor. Birdman's game is built and rooted in his athleticism and as long as he can remain healthy he is a major contributor and a difference maker as an uptempo guy. Bird has a pretty good stroke from the foul line and can step away from the hoop a bit and knock down the occasional jumper as well. Bird's leaping ability and nose for the ball also make him a pretty good rebounder on both ends of the floor ... Bird is probably the Nuggets most active rebounder on the offensive end and his efforts give the Nuggets key second-chances.

Negatives / What needs to improve: Injuries. For any player that bases his game off athleticism, they run the risk of suffering an injury that can disrupt their entire game and unfortunately for the Nuggets both Andersen and Kenyon Martin each share this burden. Bird also cannot be asked to do too much because his game has its limits and the Nuggets tested those limits last season. Bird's ability to catch passes was very worrisome last year and I'm hoping that we can attribute some of that to his finger injuries because as far as I can tell, Ty Lawson is a very creative passer and Lawson along with Chauncey Billups and even Carmelo Anthony have to trust Bird as he'll often be open when they are taking the ball inside. And suspect hands have a bit to do with anticipating the pass as the play is unfolding, Birdman has to do a better job of seeing the play develop and know that he could be getting the ball at any moment. You could hear K-Mart at times bark at Bird to stay-down on pump-fakes as Bird's method of operation aka M.O. is to go for every block. Some readers like to point to Bird's contract as a negative now as well, but I'd still rather have Bird at four-years and $17.5 million over some other guys out there ... like Darko Milicic and his $20 million over four-years.

Outlook for 2009-10 season:  I want to see Bird's minutes cut down a bit from 22.3 (a career-high) to hopefully 15-20 per night, but I don't know if that will be possible with Petro gone, Joey Graham's re-signing in question, and K-Mart out for an unspecified time. But I guess we'll also have to deal with Bird coming off knee and hand surgery, so we'll have to see when he'll be available as well. Along with hopefully a touch of a reduced role, I'd like to see Bird trimmed up a bit and ready to get back to what made him successful ... playing all out for the time he's on the floor and recapture his high-flying acts. Bird's wear-and-tear is up for debate as he was out of basketball for a time with his suspension, but he was abusing his body ... although the body can withstand and bounce back from some pretty remarkable things. So, some can say as he enters his 9th NBA season he may not have the wear-and-tear of other guys his age, but others can point to his style of play and say with all the running and jumping that his 6'10'' frame has endured that he has taken plenty of abuse thoughout his career. So getting back to the "old Birdman" might not be totally realistic, but I'm willing to think Andersen can again rise from the ashes and prove his doubters wrong and have a strong 2010-11 campaign.