The heart-and-soul of the Nuggets defense and the man who can bring down the house with a thunderous dunk might not be on the roster for the entire 2010-11 season. It's time to look at the season that was and what lies ahead for Kenyon Martin.

Contract status: Martin is in the last year of his deal that pays him roughly $16.5 million this season and is a player option season.

Overview of 2009-10 season: If you followed the Nuggets last season then you know Martin's best season as a Nugget was cut short when knee tendinitis derailed and cut short his season. Martin turned in 23 double-doubles in 58 regular season games and went on a stretch from 12/25 through 2/21 where he turned in 19 double-doubles in 25 games. Martin was winning games for the Nuggets almost by himself as the team was battling injuries. With leg problems dating back from his days at Cincinnati, Martin has had trouble staying healthy and playing above his career high in minutes this season (see below) certainly didn't help. When Martin was on the floor, he was looking better than ever ... but again there is that "staying on the floor" issue that has plagued K-Mart throughout his career as he's never played all 82 games in a single season. And now we are getting news that he is undergoing surgery once again. (thank you to hvino for the link) 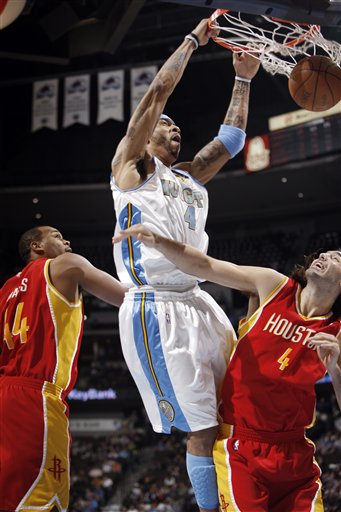 Does anything fire up the crowd more than a K-Mart dunk?

Positives / What he brings: Would anyone feel comfortable telling Martin to his face that the Nuggets will look to trade him before or during the upcoming season? I wouldn't. The guy is tough as nails or at least he looks that way and gives off that persona everytime he steps onto the floor. If the Nuggets had more defenders with K-Mart's attitude, I'm not sure the Nuggets would ever give up more than 90 points in a game. Something a little new we saw this season was Martin's ability to rebound in bunches. K-Mart entered the season talking about how good he felt and when he tied a career mark for rebounds in a season (9.4 in 2003-04 with New Jersey) we finally saw the player that Denver paid so much to acquire. K-Mart gives Denver their tough attitude and he provides the team with athleticism that is rare for a player of his height. When he's on the floor, he's a force for the Nuggets.

Negatives / What needs to improve: Martin is a veteran and a what-you-see-is-what-you-get guy. His jump shooting will forever put a scare in me as soon as the ball leaves his hand. When he goes to the foul line I always hope the first one goes in because I'm not so sure the second one has much of a chance. For such an athletic guy, Martin has a very herky-jerky style when he drives to the rim and often leaves himself shots at awkward angles. Always the tough guy, Martin will take fouls at inopportune times and might even get a technical when your team needs anything but at the time. Any why he's not fined by the team whenever he decides to let a thee-pointer fly is beyond me. Sort of a long list of dirty laundry for a guy making max money. If Martin was making $6 million to $10 million per season he'd be in the right salary bracket, but Denver decided to overpay for his services and the contract has haunted the fanbase and probably the front office ever since. At the time of his trade to the team, K-Mart looked like the piece that could put Denver right in the championship hunt, but it really wasn't the deal Denver needed (at least for the money). The organization put all their chips in the middle of the table with the K-Mart deal and this season the team might look to finally shed the contract, but it could come at the expense of a very important player.

Outlook for 2009-10 season:  If Martin made a little less money and stayed on the court a little more, he'd be perfect. This isn't a perfect world and the front office has a tough decision to make. The team can roll the dice with Martin once again and at the end of the season they can either re-sign him to a deal more realistic for a player his age or they can let him walk and clear $16.5 million off the books (and maybe do a sign-and-trade with Martin). The other option is to trade K-Mart this season and bring in a player or players totaling $16.5 million or more (if they put together a multi-player deal).

Can the Nuggets afford to roll the dice with Martin once again? If Martin leaves we all know the Nuggets will have a major hole to fill with his defensive presence and his ability around the glass on both the offensive and defensive ends of the floor. Martin is and has always been one of my favorite players since his days as a Bearcat. It would kill me to see him go, but I also understand that the franchise has many tough decisions to make moving forward. If the Nuggets could keep Kenyon and add payroll they'd be way into the luxury tax this season and it might be worth it. But really the only way the team can add an impact player to the roster is to trade K-Mart.