We move away from Denver's most polarizing player, J.R. Smith, to the Nuggets' most beloved player - Carmelo Anthony. It's hard to believe that Melo has seven NBA seasons under his belt and it's crazy, but true, to think his best years are still ahead of him.

Contract status: Two years left on his deal totaling roughly $35.7 million. The last year of Melo's deal (2011-12) is a player option season for roughly $18.5 million...meaning Melo can opt-out of his deal after the 2010-11 season and become an unrestricted free agent (Shades of course of LeBron James, Dwayne Wade and Chris Bosh, if you didn't know this, you must have very selective hearing.)

Overview of 2009-10 season: The home opener at the Pepsi Center seemed to set the stage for the Nuggets season and no play got the fans more fired up for what we all expected to be a long playoff run than Carmelo's dunk over Paul Millsap.You can watch it again here. Watching that play now just doesn't deliver the same promise that it did at the time for obvious reasons. The joy of the season is lost a little bit with the bitter taste of yet another disappointing ending. I can't imagine, or at least I hope that the bitterness tastes stronger to Melo than it does for me. Carmelo's name was brought up in MVP discussion, he appears locked into an all-star spot from now until perhaps the time he retires and he is still the face of the Nuggets franchise. During that dunk over Millsap, Melo can be seen saying, "I'm back." No doubt Melo's game was back and better than ever last season, but he was left with yet another reminder ... he can't do it alone. 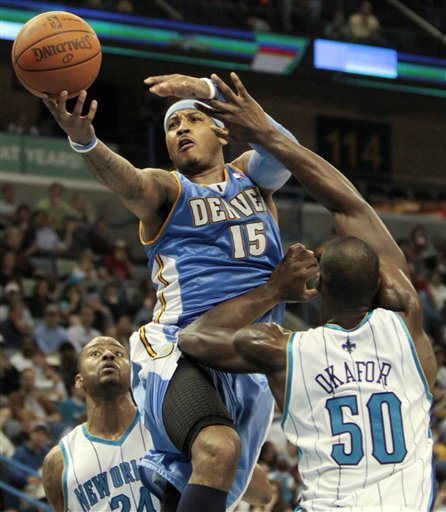 Scoring inside in the NBA is never easy, but Melo can make it look that way.

Positives / What he brings: You need a bucket? Melo will get it and can score it any way a player can. He can hit the three, the jumper, the layup, the fallaway, get to the line, get to the rim and finish in traffic. You need a buzzer beater? Melo thrives in the clutch as he hit more game winners this past season to add to his legend, like this one in Toronto against the Raptors. Melo is also, finally, becoming the voice of the Nuggets off the court - at least to the media. While he was always the quote reporters had to get, he now talks a bit more carefree about his team and what is actually on his mind ... good or bad and that is what is required from your team leader.

Negatives / What needs to improve: We've seen Melo for seven seasons. He is a scoring machine. He will show up for big games and he knows how to win in the NBA. We can keep looking for his defense to improve and it may as he learns more tricks and keeps getting more comfortable with is opposition's moves, but it's obvious he's not a lockdown defender all the time and with the effort he puts in on the offensive end it may not be fair to ask him to be. Melo is a gifted passer, but he is a scorer and scorers will always look for ways to put the ball in the hoop themselves. What we do need to see is Melo continuing to make quick decisions with the ball because like with any scorer, his teammates will begin to depend on him and limit their own game if they feel like the game is standing still. Along with making quick decisions I'd like to see Melo continue to get to the foul line at the tremendous pace he did last season, continue to attack the offensive glass and continue working on his shooting touch from all angles on the floor.

My biggest gripe with Melo's game is the fact that he's not really an above the rim player. You can't totally harp on a guy's natural talent, but an inside player like Melo, who has the ability to score inside, is limited with verticle. Melo is a big guy and moving his weight around can't be easy and his explosiveness to the rim isn't a LeBron James type (frankly...who is?!), but it does hurt his game inside. Melo loves to double-clutch to try to free himself around the rim, but he often gets his shot swatted away, where some player would be able to explode to the rim and dunk the ball or get fouled in the prosess. Athleticism isn't something that a guys gains as he ages, so consider me a bit worried about the future of Melo's inside scoring ability, but that's not something we'll really have to worry about for years ... for now we just have to deal with some stuffed shots and Melo's scowl to the refs as he looks for a call.

Outlook for 2009-10 season: I don't think we are going to see leaps-and-bounds in Melo's game next season. I think what we'll see is more of what we've already seen. If you look over Melo's career stats you'll see they are all pretty much the same. Some seasons his free throw attempts are up, others it's his long-distance shooting and last season we saw a leap in his free throw percentage. For much of the season Melo was hitting above 85% of his foul shots ... he finished the season at 83% and hopefully it will continue to increase and pad his ridiculous scoring stats even more. But the biggest thing we've seen is that a lone player can't do it all himself.

The biggest asset for the Lakers in winning the championship this season was not having Kobe Bryant. It was having Kobe Bryant, Andrew Bynum and Pau Gasol controlling the glass and Ron Artest locking in on the opponent's best scoring forward. The Celtics got to the finals using a variety of faces ... Rajon Rondo cutting defenses apart on the break, Ray Allen knocking down shots, Paul Pierce using his herky-jerky style to score points, Kevin Garnett handling the inside duties and a slew of other guys player their role. What we didn't see this season was LeBron James carrying a team to the title. Basketball is NOT an individual sport, it's a team game and you need special players to get the job done in a league filled with talent. It's not always about which owner writes the biggest checks, but more about writing the big checks to the right players to surround your star with.

Melo cannot win the title alone and he knows it. He will never admit that he can't carry the team because he's paid to carry the team and Melo is a winner and a competitor. The fork in the road is coming and the Nuggets must prove to Melo that they are willing and able to put a title contender on the floor with him. Chauncey Billups is a great piece, but an aging one. Kenyon Martin is a solid role player and starter, but his body betrays him. Nene is a rock solid power forward, but he's not a center. Ty Lawson is a game changer, but he'll need weapons on the floor with him as the second unit. Chris Andersen and Arron Afflalo are the role players that championship teams need, but there has to be a couple more of them. The Nuggets can't win the title without making some tough decisions and opening up the wallet a bit.

Melo is the franchise right now and he needs help. The Nuggets were sinking before Melo came aboard and the team is still trying to find the right combination to surround their star ... will Denver find that combo before it's too late? One thing we can be sure of ... nothing will stop Melo from trying.