It's time to dissect Denver's most polarizing player: J.R. Smith. The Nuggets' biggest scoring threat off the bench spent the better part of his time in powder blue and gold dividing Nuggets Nation, but is the consensus clear now? Have the fans had enough of J.R. Swish?

Contract status: In the last year of his deal and will make $6.03 million this season.

Overview of 2009-10 season: Throughout the season the thing that followed J.R. around was talk about his consistency. He put up a monster 41 points one game after scoring just 7 points ... two games later he notched 4 points, followed by 18 and then 8 points. His entire season looked like that, Smith did put up a career high 15.4  points per game this season and even though that is a great mark for a reserve -- Nuggets fans think he could average more (if he were just more consistent). Smith never publicly lacks for confidence and plays with the swagger of a star, but as he gets older and his game still hasn't fully blossomed that swagger starts to look foolish and even a bit misplaced. One of my favorite movies, A Bronx Tale, focuses on the phrase "wasted talent" and if J.R. doesn't become a true star in the NBA then this phrase has to apply to him. I remember a discussion once on this blog about how "IQ" should be viewed as a talent and I agree ... you can have all the physical tools in the world, but if you can't think like a star - you'll never be one. 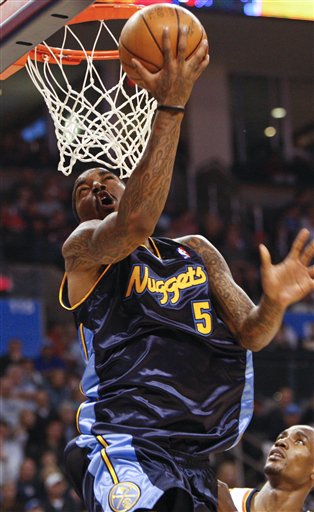 I wish we'd see more of this out of J.R. Swish.

Positives / What he brings: Smith's biggest positive is that he's one of the biggest Wild-Cards in the NBA. If he's hot and on his game he'll make whatever team he's on nearly impossible to beat ... everyone knows that. What I wonder about is how Smith is perceived in the locker room, is he a good teammate? Smith appears to be close with Renaldo Balkman (Twitter and his pregame rituals show this), but how does Billups, Melo and cough Kenyon Popcorn Martin feel about him? Yes, he can help the team when he's playing well, but he needs to be trusted by his teammates on the floor as someone that will help them in good times and especially in bad. Smith's role is to be the cover fire so to speak for Melo and Co. to get them through the hard times ... when the second unit is in and when the big guns need some assistance. Other than providing offense Smith played some nice defense this season when he put his mind to it. J.R. upped his steals from 1.00 last year to 1.30 this season - if J.R. put his mind to it more he'd be one hell of a player.

Negatives / What needs to improve: Smith needs to decide how successful he wants to be on a basketball court. Once he decides that, fans can really start to get behind him or jump out of the way -- until that time he'll continue to be a polarizing player and one that GM's will rack their brains trying to decide if he'll help or hurt their teams. Some basics, Smith needs to improve his shot selection and he really needs to improve from the foul line. Last season Smith put up a career high in three-point attempts with 467 bombs. The bad part, Smith had his lowest percentage (33.8%) since his rookie season when he only went 81-281 from distance. What kills me though is Smith's accuracy from the foul line. Smith shot a miserable 70.6% from the charity stripe, his worst output again since his rookie season of 68.9%. Smith went 142-201 this season at the line and not only should he be shooting about 10% better, at least, but he should be getting there more often. A growing one-man conversation that Bill Simmons is having says players that don't shoot well from the line do more not to get there ... like rushing shots or chucking up threes. If Smith shot better from the foul line then he'd probably shoot less threes and do what he should do ... get to the rim!

Outlook for 2009-10 season: Um ... is Smith going to be with the team? All signs point to yes for now. Smith is in the last year of his contract and guys typically perform as they are looking for a new deal. Smith's $6 million and change contract will also be a valuable trade chip for the Nuggets this season as they continue to search for the right combination of player to surround Melo. If Smith is to stay in Denver then he must have an instant change in mentality, a better shot selection and an overall improved game. Either that or he should continue allowing question marks to pop-up around his name ... thus making him untradeable.