There will be a Game 7

Share All sharing options for: There will be a Game 7

With Lakers 89-67 blowout win over the Celtics in Game 6, we'll get to see something fairly rare in recent years ... a seventh and deciding game.

If you're an NBA fan, get to your TV this Thursday night and watch something that we've only seen four times since I was born in 1982, and 16 times previously in NBA history ... a Game 7!

Here is the list of Game 7's since I came into this beautiful and crazy world:

The theme above? The home team is 4-0 in those Game 7's. In the 16 Game 7's in NBA history, only three times have we seen the road team come out victorious.

So with just a 18.7% winning percentage the road team has an uphill battle, but a Boston franchise has pulled off 2 of those 3 road wins and is looking to make it 3 out of 4 come Thursday night. 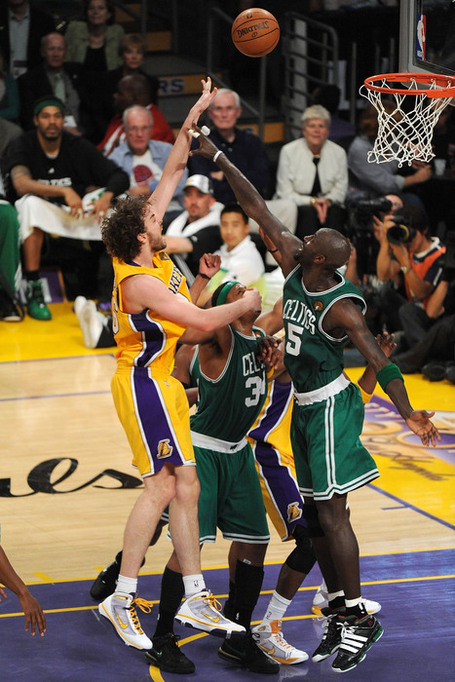 Gasol will need another performance like Game 6 where he posted 17 points,
13 rebounds, 9 assists and 3 blocks for the Lakers to be crowned champs.

Let's cram in some additional stats while we're at it ...

We could be in for some interesting performances on Thursday as nerves should be high, the lights will be shining bright and the stars will be out in full force. I've been giving my buddy Dax, who recently moved to Colorado from California, a lot of crap for his undying love of the Lakers and he's even nervous or at least excited. When I asked him about a possible Game 7 Dax responded by texting, "Huge Game 7 man, I'm gonna be feeling crazy until then."

As much as it pains me to have this Laker friend, I can't question his fandom and his loyalty to his team. He's been hearing me talk crap for days-and-days, yet hasn't once wavered and even fires back with some jabs about my Nuggets.

Throughout these finals I've been rooting more for Boston out of spite for L.A. than any type of love for Garnett and Company and I'm starting to question why I'm rooting for either team. I'd never be caught dead rooting for the Patriots, yet most if not all Pats fans are Celtic fans and don't get me started on Paul Pierce. Growing up in Colorado I have a natural hate for anything Kansas Jayhawk related so Pierce has been on my bad side since his days at KU.

The only thing we know for sure ... when the 2009-10 NBA season will come to an end. And when the playing stops ... the offseason really starts to take off! The NBA draft happens in nine-days and with the draft we'll see some trades and those trades could help to pave the way to seeing where teams are planning on looking in free agency.

The NBA will get what they secretly want with a seventh and deciding game. And the fans will hopefully get a close game that in the end we'll feel happy about crowning the champion for. The deciding game will have the fans of both franchises in a frenzy for the next day and half, but the frenzy for the rest of starts after that game.

It's all coming to an end that will actually start the beginning. Game 7!