The game that made me do CARDIO

Share All sharing options for: The game that made me do CARDIO

Tonight for Game 4 of the NBA Finals I decided to hit the gym for the second half. I was in a trance and fixated on the TV as I watched the Celtics bowl over the pins known as the Lakers in Boston's 96-89 victory. The win evened the series at two games apiece with one left to play in Boston before the series shifts back to Los Angeles.

I don't have a lot to say about this game, but if you did watch it you had to appreciate the the Celtics relentless attacking style in the second half, especially late in the third quarter and throughout the fourth.

During the first half of the game I just didn't think the Celtics had a shot to win tonight's game. It seemed like they couldn't catch a break, hit a shot or put together any kind of consistent offense. The Lakers on the other hand were getting to loose balls and drilling key shots. But in the second half, just like he did in the first half and with all of his minutes in this series, Boston's Glen Davis used his bulk to attack the rim and he along with Nate Robinson changed the entire game for the C's.

It was great to see the bench of a team just take over. I'm not a fan of either the Celtics or the Lakers, but I couldn't help but to root for the hustling guys that were just killing themselves on the floor. Basketball games are often compared to boxing matches (I'm very guilty of this) and the fourth quarter just felt like a good old fashioned slugfest with each haymaker being delivered by the Celtics.

Some stats from tonight's game:

The sad thing for Denver is they don't have a Glen Davis ... the closest thing Denver had last season was Joey Graham. Denver had a shot to take an undersized power forward in Dejuan Blair, but they passed up the opportunity. Like the Birdman, Davis is effective with limited time and really gets fueled off his own hustle. During one montage the focus was on Davis' drives to the hoop (I had no game sound so I had to guess what they were talking about) and how he locked his eyes in on the rim, while his body knew what to do ... create contact by leaning in and bouncing himself off guys and into position to hit And1 shots.

Watching Davis scream out after one particular And1 made me want to get out and play some hoops. That's the best thing about watching NBA games for me ... when they inspire me to want to go out and play. Basketball is a beautiful game and can look very graceful when guys are hitting jumpers and cutting through traffic on their way to the rim.

But basketball, for me, is at it's best when it's being played off raw emotion. My favorite music is sung and played by bands that seem to want to die for their music. And with basketball, when guys are giving their all and just doing whatever they can to get the ball and put it in the hoop that's when I really like to watch. When players let their guard down and get excited along with the crowd, when they stop caring if what they are doing looks pretty and just care that it works and just lose themselves in the game ... that's the game I love.

It's too bad that the Denver Nuggets were not the team tonight that I got to watch, but the Celtics did provide the fire that I needed ... the kind of fire that kept me doing cardio for who knows how long. I lost myself in the game and for me that is what basketball is all about. 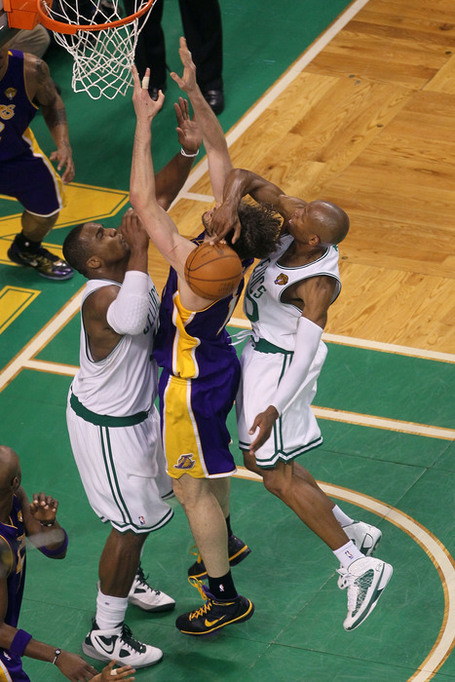