Share All sharing options for: "Stumbling on Wins" WINNERS Announced! 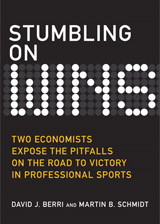 Surprisingly - and unfortunately for us fans - three Denver Stiffs readers "stumbled" upon the exact number of playoff games that the Nuggets would win this year (ugh, two).  Congratulations to readers Chris "chantech" Chan, Matt Stahlhut and Dan Amale, all of whom will receive a free copy of Professor David J. Berri's newest book, "Stumbling on Wins."

Chantech, Denver Stiffs' resident statistician, noted that the Nuggets winning two games had only a 21.8% chance of happening...and yet he called it anyway.  He also predicted the final total score of game six within 11 points.  Not bad.

Dan and Matt also picked the Nuggets to win just two games.  Other readers were all over the map, ranging from six wins to 16 wins.  I guess in hindsight most of us were too optimistic this year.

Additionally, Matt has gone national with his penchant for picking playoff games.  He recently received a shout-out from Henry Abbott over a TrueHoop.  Way to go, Matt!

As we've become accustomed to in Nuggets Nation, there's always next year...

Thanks to everyone for participating!  We'll try to do more contests in the future.