I don't know anything about committing crimes. I do know that stealing is wrong, but I can't help but feel good about the robbery the Nuggets committed in trading for Ty Lawson.

Contract status: Four years and $9.4 million remains on Lawson's rookie deal. The Nuggets have team options that kick into place for the 2011-12 and 2012-13 for Lawson and can make a qualifying offer making Lawson a restricted free agent for the 2013-14 offseason for just $3.6 million.

Overview of 2009-10 season: Denver got lucky being able to steal Lawson with the 18th pick of the 2009 draft. Lawson has more speed than just about anyone in the league, showed a nice three-point shot and was pretty reliable from the free throw line. Lawson's veteran play allowed the team to expand his role immediately. The Nuggets found success playing Lawson in any kind of combination ... he could play alongside J.R. Smith, Arron Afflalo and Chauncey Billups. The spark plug off the bench gave the Nuggets something they desperately needed. 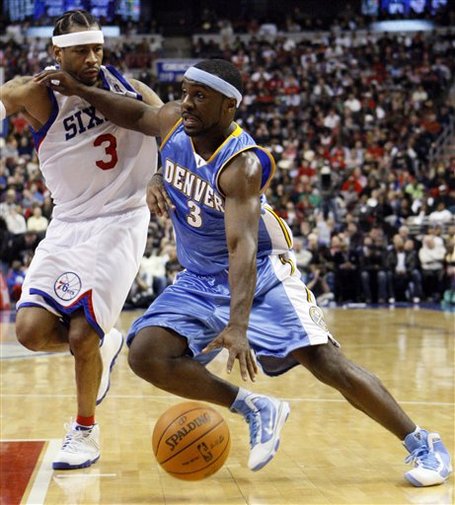 Positives / What he brings: Before Lawson's arrival I was anxious for the Nuggets to find a quality back-up point guard for Billups who would be a change of pace guy off the bench, someone who could up the pace of the game and inject the Nuggets with the energy every bench needs.

After last season I wrote a piece here hoping Denver could lure Shannon Brown away from the Lakers. Brown had the athletic ability and the go-go mindset that I thought the Nuggets needed. What I didn't know was that Denver had an even better plan in mind ... a plan to bring Denver more than just a back-up.

It was obvious from opening night that Denver found a new point guard to bring off the bench in place of Billups. Lawson never really looked like a rookie and rarely played like one. Whenever Anthony Carter used to run the show I often found myself nervous of his decision making and scared the offense would sputter, but with Lawson those fears subsided.

Lawson plays like a veteran with sound decision making, has a 6th gear like nobody else in the league, has court vision that leaves me in awe, attacks the basket like he's made of metal and the rim is a magnet, looks to get his teammates involved, has the desire to play defense and has a reliable shot from just about everywhere on the floor.

Negatives / What needs to improve: Lawson makes up for his lack of length with his speed and desire and has figured out how to get to the rim despite his limited stature. Lawson needs to play with guys who are willing to run with him and are constantly on the lookout for his passes in traffic. He will continue to get his shots blocked at times and with his attacking style he also runs the risk of injury going against such big bodies. Allen Iverson made a career going in among the trees and Lawson looks to be cut of that same mold. So with the reward of Lawson's playmaking we may have to deal with some injuries.

I did think Lawson hesitated a bit looking for and taking his own shot. I don't know if Lawson hesitated shooting because he didn't want to upset his teammates or because he didn't trust his jumper as much as he needed, but that needs to change. Lawson's speed will allow him to create any kind of room on the floor he wants and if he can develop a pull-up jumper and a "in your face" three-pointer he will be deadly.

I'd also like to see Lawson develop more of a voice with his teammates. Being a leader is all about respect and it can be tough for rookies to feel like they can interject their own voice, so hopeful as time goes by Lawson will become more of a leader.

Lawson averaged 20.2 minutes per game last season and much like a good comic, he always left us wanting more. As Denver's leader and starting point guard continues to age we can hopeful rest assured with Lawson waiting in the wings. Next season the kid out of North Carolina should take on a bigger role with the team. He'll need more minutes and hopefully his work this offseason will show and it'll be even harder to keep him on the bench.

As Lawson's shot continues to develop he will move towards becoming a more complete player. It wont be long before Lawson's play will demand him a starting role with the team. There are some people who probably think Lawson wont become a legit starting guard in the league and he'll always have some doubters because of his size, but being a great basketball player doesn't always have to do with size and more to do with heart and desire. I think the Nuggets found a gem with Lawson and I think he'll be proving doubters wrong throughout his career.