Chauncey Billups, at age 33, did a rare thing this past season by posting a career high in points scored in his 13th NBA season. It may not be in the Nuggets best interest to rely on an aging guard to carry so much of the scoring load, but Billups proved he's still a top guard in the league.

Contract status: Two years and roughly $27.4 owed. The last season of Billups' deal (2011-12) is a team option season for $14.2 million. So, Denver only owes Billups one more year of guaranteed money.

Overview of 2009-10 season: The label Player/Coach was unofficially placed on Billups as soon as Denver acquired him from the Pistons. But this season after George Karl was forced to leave the team due to his cancer treatments, it was reported that Billups was asked by the team to take on more of a coaching role. Billups said the bigger responsibility took a toll on him down the stretch and we all saw something different in his play.

Again the knock has always been that Billups fades down the stretch. The Nuggets rely on Billups to be the calming force of the offense and I think the coaching staff leaned on him too much. It was clear to me that Ty Lawson was able to handle himself on the floor and should have been able to provide more of a rest for Billups.

But Chauncey provided the Nuggets with some big scoring nights, broke his career high in scoring with a 39 point performance against the hated Lakers at Staples Center in a 126-113 on February 5th and proved to be a reliable scoring option. But Billups, just a year removed from leading the team to the Western Conference Finals, also was part of a team that again fell short in the post-season and might be considered by some of his teammates as a bit of a ball-hog. 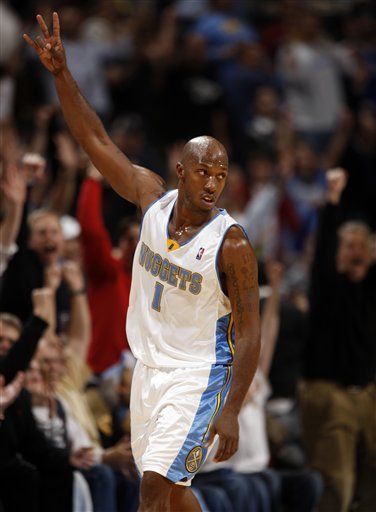 Positives / What he brings: Leadership, professionalism, consistancy, controls the flow of the game and a clutch performer. Billups is still a reliable scorer and a premier point guard. He has the ability to make his teammates better and can still take over a game by himself.

Negatives / What needs to improve: The knock on Billups has been that he wears down as the season progresses. His best month this past season came in January when he averaged 24.2 points per game and shot 47.8% from three-point land. The Nuggets went 10-2 during that stretch and Billups may have burned himself out.

I found myself wanting Billups to pass the ball a bit more and it seemed like Chauncey tried to take over too many times. I didn't find myself complaining of Billups "taking over" when he was hitting big shots and leading the team to wins, but when his shot was off I would become critical. Well, I can't have it both ways. I lived with Billups taking the big shots the rest of the season, because that is who he is ... hit or miss. So to call it a negative for a guy taking over too much and then praising him for being clutch isn't fair. I love how I just argued with myself.

Outlook for 2009-10 season: Billups went back to his old No. 1 jersey and hung up his tribute to John Elway this season. For those of you that are superstitious and want to blame the Nuggets early exit on the Number change ... I can't argue with you, because I'm superstitious.

With Billups not getting younger, it'll be key for Denver to figure out how to best utilize him. We can point to Jason Kidd, 37, and Steve Nash, 36, as aging guards who still get it done, but each guy has had some tinkering to their game. Kidd sort of hangs out on the three point line and Nash has been able to rest more with the emergence of backup Goran Dragic.

Denver's coaching staff must trust Lawson more and allow Billups to take some nights off. Dragic allowed Nash to rest in the third and some fourth quarters and Lawson has the ability to allow Billups to do the same. It'll be interesting to see if Billups can adjust his game to still maximize his ability. Billups loves to use the second half to do most of his scoring, but must become even more efficient.

Billups is still the leader, but needs to take a more reserved role. Chauncey was the second leading scorer for the Nuggets and I think that needs to change. The only way Billups can take a backseat scoring wise is if someone else steps up. Chauncey will do what his team needs and if he sees he's still needed as a scorer he'll continue to try to score, but if he sees that he can be more of a facilitator then he'll be that.

I wrote this last year and it remains true: The key to having Billups is that he helps make the Nuggets a complete team as Denver's true point guard and he will continue to do what the teams needs him to do. The key next year though is that if he's asked to be a major scoring threat then I think Denver is in trouble. Billups will still be a reliable scoring threat, but he shouldn't be asked to be the team's second best player anymore. The Nuggets have been developing talent on the fly and it's time some of those moves start paying off.