Realizing the influence of The Dream Team

Share All sharing options for: Realizing the influence of The Dream Team

While reading Cameron Stauth's 1992 book titled, The Golden Boys, I realized the global success of the 1992 Olympic Dream Team didn't just awaken the rest of the world to "our" game, but instead changed the game of basketball as we knew it.

First off, if you haven't read Stauth's book then I suggest you venture over to Amazon and grab a copy ... you can snag one for less than $10 (hardcover). His book gives an unauthorized look at the selection process, detailed stories on each player from childhood to the NBA and some nice behind the scenes stuff. So, if you want to know more about head coach Chuck Daly, Magic Johnson, Larry Bird, Michael Jordan, Scottie Pippen, Clyde Drexler, John Stockton, Chris Mullin, Charles Barkley, Karl Malone, David Robinson, Patrick Ewing, college star Christian Laettner and other who didn't make the team (like Tim Hardaway and Isiah Thomas) then this is a great book to get some background on players that you either remember watching or maybe guys who you really never got to see play.

A couple story lines that I had no clue about ... Laettner's almost entire background. The only thing I really remember or wanted to know about Laettner was that he played for a college team I despised and he personified those unlikeable teams. I had no idea that he liked to keep his sexuality mysterous to frustrate the media or realized that he was such an asshole while he was at Duke. I also never knew much about Mullin and had no idea he was almost out of the league before his career even took off because of alcohol problems. I've read, watched shows and plenty of games about the other guys on the team, but there was even a few tidbits that were definitely helpful in understanding more the guys I remember most while growing up watching the NBA. I love getting to put some real life stories behind the guys I used to watch who play the game I love the most. 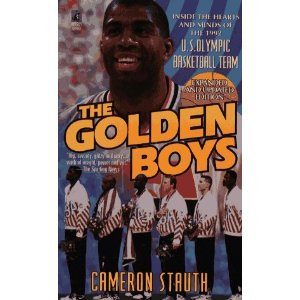 Anyway...while reading this book I found myself doing what any good book should make you do ... question the shit out everything while you're reading it. Now, I don't mean I'm questioning Stauth's facts or tales, but rather just how much his subjects helped shape and change the NBA. We all know that The Dream Team gets basically all the credit for taking the game global and popularizing it outside of the United States. And we all can see how the influx of foreign players over the years has had a good amount to do with The Dream Team. But what we may not be totally appreciating is what the "outside" world eventually gave back to the NBA.

Style of Play
On page 205 in Stauth's book we get this passage after a college squad brought in by coach Chuck Daly beat The Dream Team in a scrimmage:

"The U.S. pros, the reporters pointed out, had ignored the perimeter players when the ball had gone inside, only to have the ball passed back outside for a quick three-pointer. It was the classic penetrate-and-pitch European strategy that the Selection Committee's Bob Bass had warned about last summer. Now it was working! Against the golden boys! Horrors!"

Is it true that the penetrate-and-pitch strategy is European? Well Stauth again references it on page 228:

"Jordan sidearmed a pass to Mullin, who was waiting--all alone--just outside the three-point line. Rip! It was classic European-style basketball: penetrate and pitch. It had taken the U.S. about a week to perfect it."

Go ahead and think of a team in the NBA that utilizes the penetrate-and-pitch strategy. Got one? Got two? Got 15? How about all of them? The most famous p-and-p team of the past decade? They'll be playing for the right to represent the Western Conference starting Monday, May 17th, the Phoenix Suns.

The Suns did adopt an offensive strategy devised by Mike D'Antoni, who had a famous career in Europe, and they have been trying to win an NBA championship with that style ever since. What will that say about the American game if the Suns are able to win a championship with a style born overseas? It's an interesting thing to think about.

Who saved the NBA?
Some people would say that Michael Jordan saved the NBA. Others would argue that Earvin "Magic" Johnson and Larry Bird saved the NBA and Jordan helped push that popularization over the hump. I would agree with the second of those two points. Bird and Magic were responsible for getting the NBA off tape delayed viewings and Live into our homes. Jordan though spawned the age of the Super-Duper Star. The ability for a player to "take over" a game has been around since the first peach basket was erected, but Jordan did it in front of millions of people and did it in a way that influenced kids all over the planet.

I'm sure those older than me can remember a guy taking the ball to the top of the key, isolating himself with his defender and then going to work, but did anyone ever do it the way Michael did? Jordan's one-on-one popularization is still in the league today ... we saw it (see it) with those who tried to take Jordan's torch: Allen Iverson, Vince Carter, Kobe Bryant, Dwayne Wade, Carmelo Anthony and LeBron James. What we have now is a blend of team basketball, with strategies like the penetrate-and-pitch, combined with spurts of the old Jordan game of the isolation play.

NBA basketball has always been a melting pot of ideas and strategies ... and it will continue to evolve.

Where do loyalties lie
Trades have always been a part of the game and more recently free agency has become a staple of the NBA. We all know the days of a player spending his whole career with one team are a very rare thing. It looks like Tim Duncan will be able to spend his entire career in San Antonio (remember he almost signed with Orlando way back when) and Kobe Bryant might just be a "Laker for life." On The Dream Team only 4 of the 11 members spent their entire careers with their original team. Can you name them? (I'm not counting Laettner in this.)

Here is the list: John Stockton, Larry Bird, Magic Johnson and David Robinson. Some of you may include Michael Jordan on that list, but the Wizards thing did happen. So, seven players considered the best in the world to be placed on this mighty team were at some point changing uniforms. This seems crazy to me ... it also seems crazy how a guy like Shaquille O'Neal can be considered so great, yet he has now tossed on five different uniforms and maybe even six or seven before it's all said and done. I've never quite understood how a guy can be so great, yet also deemed expendable by his team ... although I realize the business side plays its role. But it is somewhat crazy right? Am I alone here? Ok ... fine, I don't mind being alone.

With the popularity of Fantasy Sports I'm afraid that more and more people, especially younger people, will root more for the names on the back of jerseys than the names on the front. And with player movement in the NBA resembling Fantasy teams or even videogame juggling people's loyalties are being tested. If you grow to like a player's game in college, like many did with Carmelo Anthony, then you became a Nugget fan (we have all sorts of readers here for that reason alone), but what happens when a player you are loyal to changes teams? What happens when it becomes so regular that teams should stop putting names on the back of jerseys because the faces change too much? Will we see that day? Am I too paranoid? Were there ever days when teams stayed together? The famous Bill Simmons waxes on and on about his 1980's Celtics teams led by Bird, Kevin McHale and Robert Parrish, but that was back when the rich got richer and pillaged the smaller teams. We are not far from those days now and we see it happening with the Lakers, Celtics, Magic and Mavericks.

The balance between playing for fun, playing for money and being loyal is a tricky one. Loyalty plays a role with the fans, the players and the owners. It'll be hard for me to say goodbye to this current Nuggets team, just as it was difficult last year and every year before that.

I like stepping back and looking at the game of basketball as a whole. I also just like to ramble about nothing in particular sometimes. Reading will get my gears grinding, but it doesn't always get them moving an any sort of productive direction.

I think I need to go shoot some hoops ... maybe work on my penetrate-and-pitch as a writer as well.