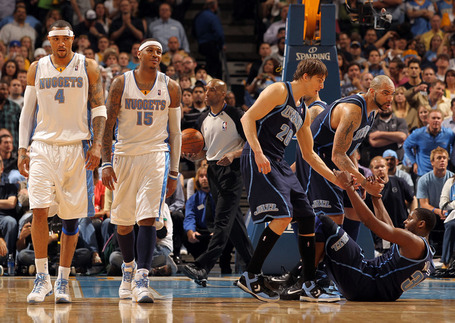 You had to love the headline of Chris Dempsey's latest Denver Post article: "Melo, Denver to get physical against Jazz," as if it's a foregone conclusion that the Nuggets will play tougher than they have in Games 1 and 2. But getting physical isn't the only key to winning Game 3.

Denver Stiffs reader "Frontrange" got a jump start on the rest of us by suggesting what the Nuggets need to change in order to win Game 3. A game guaranteed to be no walk in the park for our Nuggets. "Frontrange" suggested full court pressing for the entire game, keep the Nuggets legs fresh and, interestingly, start Nuggets Stiff center Johan Petro on the Jazz's bigger Stiff center Kyrylo Fesenko, while saving Kenyon Martin for bench duty against Carlos Boozer.

All of the above are good suggestions. But if we can revisit the two most notable Jazz/Nuggets game from this past regular season, a slightly different strategy for beating Utah emerges.

The Nuggets played the Jazz - as always - four times this season. But for playoff scouting purposes, two of them aren't relevant in my opinion. The first of the four Denver/Utah games was played at Denver on opening night when neither team had found their true selves yet, so I'd disregard that. And the third of the four matchups, which took place on January 17th, had the Jazz coming into Denver on the second of a back-to-back. So let's disregard that game, too, as it was hardly a fair fight for Utah.

But both games played at the dreaded Energy Solutions Arena, where the Nuggets will be on Friday night, tell us a lot about how to beat the Jazz in Salt Lake City. The first time the Nuggets played at Utah was on January 2nd. The Nuggets were without Carmelo Anthony and Chauncey Billups in that game, were coming off the holiday season and pulled off a startling 105-96 victory. The second visit to Utah, on February 6th, had the Nuggets playing a back-to-back after shocking the Lakers in Los Angeles late the night before without Melo. In that game, Melo and Chauncey were absent again, and yet the Nuggets almost won the game anyway, losing 116-106 but it was actually much closer than that throughout most of the game.

So what did those two games have in common, other than the Nuggets two best players were missing? While I haven't re-watched them recently (sorry readers, I don't record every game), if memory serves the Nuggets played well in both contests by playing at a frenetic pace offensively. In those two at-Utah outings, J.R. Smith and Ty Lawson ran the Jazz ragged. You see, the Jazz thrive in a slow-it-down, half court style game. Something the Nuggets are awful at. Conversely, the Nuggets feast on opponents when the possessions are high and runs can be had, like we saw in the fourth quarter of Game 1 at Pepsi Center. Bottom line is, Lawson needs more playing time to shake things up against the Jazz and get them befuddled.

Defensively, however, is a different story. Hoping the Jazz miss shots to kick off fast breaks isn't going to cut it. The cliched approach is to "get the ball out of Jazz point guard Deron Williams' hands." (I've already read that Nuggets acting coach Adrian Dantley stating that'll be their approach.) But I have news for AD and the rest of the Nuggets: great players like Williams - especially point guards - will have the ball in their hands whether you want them to or not.

Here's what I'd do defensively. As good as Williams is, the shear nature of being a point guard makes one unselfish. Meaning, even though D-Will should go for 45 points two games in a row to send the Nuggets back to Denver down 1-3 in the series, he won't take enough shots to get there. Knowing that, why are the Nuggets collapsing three - and in sometimes four - defenders on him every time he runs the pick-and-roll with Carlos Boozer at the top of the key? By doing this, the Nuggets have routinely allowed Williams to make easy dump passes to cutters like Paul Millsap and C.J. Miles. Instead, I'd sag off Williams a bit and take my chances with his jump shot rather than send the house to guard him, only to have Williams make those easy passes for layups and dunks.

As far as the "physical" issue raised by Dempsey and the players themselves, this should be in the forefront of the minds of Nuggets front-linesmen Kenyon Martin, Nene and Chris Andersen. On a number of occasions in Game 2, I saw Boozer out-muscle at least two Nuggets big men en route to grabbing his 15 rebounds. This even happened off missed free throws on a few occasions! Seeing the generously-listed-at-6'9" Boozer consistently out-rebound guys taller than him is frustrating, and boxing out and positioning really does just come down to how physical you're willing to be.

I'd be remiss if I didn't mention the officiating likely to be seen in Game 3. By now, I'm sure whomever is officiating or supervising the officiating in Game 3 is aware that calling an absurdly high 67 fouls in Game 2 was an abomination...even by NBA officiating standards. The playoffs are not meant to be a whistle-fest, and I'm sure the refs will be letting a number of fouls slide in Game 3. I hope the Nuggets known this and embrace this rather than fight against it and whine about it for 48 minutes. And let's hope the officiating crew pays attention to the floor boundaries this time.

Oh, and it would help if Carmelo Anthony and Chauncey Billups shoot better than 13-for-36 combined.