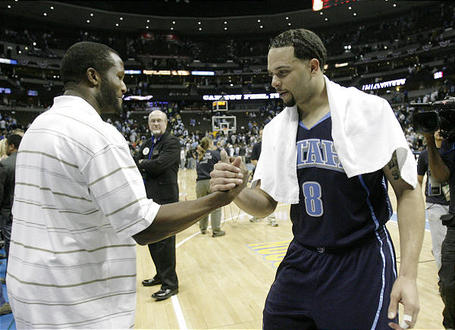 Referee stereotypes on parade in Denver - TrueHoop Blog - ESPN
Henry Abbott walks us through the poor officiating from last night and points out how, yet again, games like this only add to the fans' suspicion about NBA refereeing.

Utah Jazz notebook: Matt Harpring tells Jazz players not to be a nice fellow to Melo | Deseret News
Apparently, former Jazz - and Carmelo Anthony irritant - Matt Harpring has been talking to the current Jazz players about how to defend Melo.

2010 NBA playoff primer - Ian Thomsen - SI.com
Now that the six-month "preseason" is out of the way we can move on to the real games. Let's start with the five teams most likely to win the final game in June...and the Nuggets aren't one of them.

Adrian Dantley Once Again Squares Off Against Jazz -- NBA FanHouse
I've mentioned this article before, but if you haven't read it already it's a must for today.  Fanhouse's Chris Tomasson chronicles Adrian Dantley's time in Utah as a Jazz player and why and how it ended so poorly for AD there.

Monson: For at least a game, bad karma can take a leap - Salt Lake Tribune
A Salt Lake City perspective on the Jazz's karma in this series.