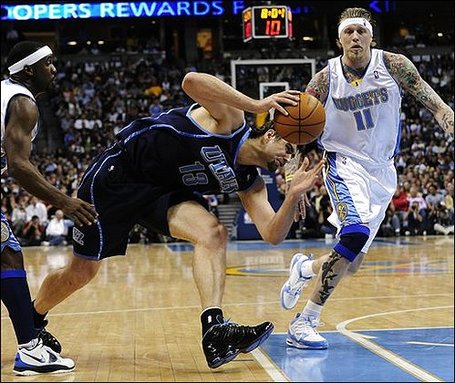 After watching the undermanned Jazz get run out of the building in the fourth quarter on Saturday night, we're already seeing why Nate and I both confidently picked the Nuggets to win the series in five games.

Two of my very good friends here in Denver have ruptured their Achilles tendons in recent years. After seeing what they had to go through with rehab, I take no delight whatsoever in Utah Jazz center Mehmet Okur's now ruptured Achilles - something I knew happened as soon as he went down in the second quarter of Game 1. You could just see it in Okur's face when he buckled in pain and his teammates had to carry him to the Jazz locker room.

But while I feel genuinely bad for Okur, it must be said that good fortune has found the Nuggets at last. And at the tail end of a season riddled with bad fortune, no less. Watching an evenly played game through three quarters in Game 1, I could've sworn I was observing a two-on-five game in the fourth quarter. Deron Williams and Carlos Boozer fought gallantly, but neither has the "it" factor to single-handily take over a game a la a Dwyane Wade, LeBron James, Kobe Bryant...or Carmelo Anthony who, for the second consecutive post-season, is embracing what playoff basketball is all about.

As Game 1 went on, I felt like Nuggets acting coach Adrian Dantley was at last channeling George Karl, at least when it comes to rotations. If you watched the rotation patterns closely, they were akin to Karl's rotations when the Nuggets were at their best earlier in the season (read: a DNP-CD for Anthony Carter and ample playing time for Ty Lawson who admirably spelled Chauncey Billups). Give Dantley credit for sticking with the rotation and remaining patient for "the Nuggets run" that came in the fourth quarter. It was a huge departure from Dantley's panicky lineup changes that we saw in the Nuggets remaining regular season games against the Spurs and Suns.

One thing that I totally missed in Game 1, and will look closely at in Game 2, were J.R. Smith's shoes. According to a friend who sat in the second row from the floor in Game 1, J.R. changed his shoes no less than three times throughout the game, including a blue and gold pair and a low-top pair (I can't confirm if he wore the all-gold pair or not). Did anyone else who was there or watching on TV notice this? I certainly didn't. But whatever pair J.R. finally donned for the fourth quarter clearly worked as he erupted for 18 of his 20 points. On a sort of funny side note, I remember looking at the Pepsi Center scoreboard early in the fourth, seeing that J.R. had but two points next to his name and saying to my seat mate: "J.R. hasn't done @#$% in this game." Maybe J.R. heard me.

So what should we be looking for - or forward to - in Game 2? If I were the Nuggets, I'd stick with the game plan rotation-wise from Game 1 and continue to pound the boards. But Dantley and his staff need to emphasize two areas that must be improved for this (and possible future) series.

First, the Nuggets collectively have to get to the free throw line more. The Nuggets broke my rule for winning basketball games - have more free throw attempts than personal fouls - and yet they won anyway. But that's because Melo had his best playoff game ever scoring and shooting-wise, J.R. was red hot in the fourth and the thinned-out Jazz simply ran out of gas. But I doubt Melo will shoot 18-of-25 again and get away with getting to the foul line just twice. Moreover, with the Jazz going from one soft center to no centers at all, there's no excuse not to punish them inside from the get-go on Monday night.

Second, the Nuggets have to play better defensively in the first half. Giving up 56 points in a half is bad in any game, but especially bad in a playoff game and must be an area of concern for the Nuggets coaching staff. Perhaps the Nuggets should consider playing Arron Afflalo on Williams more in Game 2? Just a thought.

As already stated, good fortune somehow found it's way to our Nuggets at just the right time. Now they must take advantage of it by continuing to play confident but not cocky. That starts with getting to the free throw line and putting the clamps down defensively. If that can be done, the Nuggets will make the one-hour (or so) flight to Salt Lake City being up 2-0.