A must win for the Nuggets tonight and they came through with a 123-101 victory over the Memphis Grizzlies. The best part ... with the blowout win and a game tomorrow night in Phoenix, Denver's starters didn't have to log big minutes.

With this game under their belt, the Nuggets have set up a very important game tomorrow night in Phoenix. It's tough not thinking about that game right now, but if Denver can do what they did tonight they have a great shot to get their first win in Phoenix in ... I'll let Andrew worry about that.

Fans at Pepsi Center were treated to a high-scoring affair tonight for Denver's final home game. The Nuggets were tested early, but finally got some breathing room and then turned the contest into a route. The most important aspect of tonight's win, other than the win, was how Denver was able to save some legs by opening up a big lead and only playing one starter in the fourth quarter ... Arron Afflalo.

Afflalo turned in his first double-double of his career with 22 points and 13 rebounds (2 offensive) on 7-13 shooting, including going 6-6 from the foul line. The Nuggets were at the foul line early and often tonight, Denver finished 32-39 (82.1%).

In the first quarter, Denver went 12-15 from the free throw line and that was a reflection of how aggressive the team was playing. From the opening tip you could tell the Nuggets wanted to get a win and a convincing win. After the game Chauncey Billups admitted the team wanted to get the starters some rest and the only way to do that was to get the type of win Denver is surely capable of.

Things looked a bit concerning at the beginning of the game as Zach Randolph pulled down an offensive rebound on the first shot and miss of the game and converted two foul shots. But Randolph's aggressive play would lead to foul trouble and finally led to his ejection with 1:13 left in the third quarter as the Nuggets began to run away with the game. On the night Randolph finished with 12 points and 7 rebounds (4 offensive) and I was happy to see him go.

Getting back to the first quarter ... the Nuggets were sharing the ball and making the extra pass. When Denver plays unselfish early at home it usually translates to the rest of the game and thus Denver's 34-7 record at home (tops in the Western Conference right now). At the 7:39 mark of the first, a Billups rebound led to a quick outlet to Melo who Magic Johnsoned (bounce pass) the ball to a streaking Afflalo for an easy jam. Later in the first quarter at the 5:05 mark, Afflalo returned the kindness when he passed up a three-point shot to find a wide open Nene under the hoop for an easy dunk.

A classic moment in the first ... Kenyon Martin could be heard telling Chris Andersen, "Bird, stay down G** D*****." This was after Bird fell for yet another headfake and committed a foul on his way back down to the hardwood. As well as Denver played in the first quarter, it was not reflected on the scoreboard as they only took a one-point lead (32-31) into the second quarter.

The second unit came in to start the second quarter and they did a poor job of building on the momentum the starters created. The good news ... Ty Lawson started the second along with Johan Petro and J.R. Smith started the period 2-2 from downtown. The bad news ... when Lawson checked out at the 6:20 mark the Grizzlies held a 44-42 lead. I'm such a Lawson homer that I'm going to attribute Lawson's ineffectiveness to rust and I believe when he re-entered the game later that his play proves my point.

With the starters back in the Nuggets defensive intensity picked back up and the Nuggets used a quick 7-0 run to take a 49-42 lead as Melo converted a couple run out layups off Denver steals. J.R. Smith's 11 points in the quarter helped Denver get in position to take over the game, but the Nuggets just couldn't pull away. Denver did grab a 60-49 lead with just two minutes left until the half, but the Grizzlies did a great job of disrupting the Nuggets momentum and closed the quarter on a 8-3 run to make it 63-57 Nuggets heading to the locker room.

At the half J.R. had 17 points, Melo 16 and Billups 5 assists. K-Mart played 18 minutes and had 6 points, 5 rebounds (2 offensive), 1 block (volleyball style), 1 assist and 1 steal. Martin's presence on the floor can't be overstated ... the guy is an intangibles machine. In the first half Martin had a huge block on Hamed Haddadi, a pretty put back lay up off a Nene miss and a thundering alley-oop from Billups. Martin can do it all and just is a great piece to the Nuggets puzzle. Martin is sort of like those screwdrives that comes with interchangable bits ... he will give you pretty much anything you need and without him you often find yourself needing exactly what you know he has. I was hoping Martin would not be needed much in the second half and don't want to see him log heavy minutes quite yet. Martin would play just 7 minutes in the second half ... thank goodness!

The starters came out of the locker room and took it to the Grizzlies in the third quarter. Denver managed to get a 75-62 lead despite blowing fastbreak after fastbreak. The defense for Denver got into a rhythm and held Memphis to just 17 third quarter points. As pointed out earlier, Randolph decided he had had enough and got himself ejected after battling with Nene for position all night and not liking the Brazilians physical play. At the end of the third Denver held a 93-74 lead and tacos were definitely within comfortable reach.

Adrian Dantley handled the rest of the game just perfectly. I have been bashing Dantley a bit for his riding of Billups and improper use of Lawson, but he got the end of the game right tonight. Starting the final period Dantley played Lawson, Afflalo, J.R., Bird and Petro. Enough can't be stated about the coaching staff trusting Petro after Martin's injury and continuing to give him minutes shows how much the staff trusts the Frenchman.

The Nuggets bench guys and Afflalo pushed the lead to 101-76 after Birdman delivered the tacos with a two handed patented Bird throw down. No Malik Allen needed for his namesake tonight ... Tacos never got off the bench tonight. Instead of Allen, Dantley chose to insert crowd pleaser and Denver Crime Stopper Renaldo Balkman into the game at the 7:15 mark ... giving Birdman a much needed rest.

The Nuggets closed the game and the doors at Pepsi Center with their 34th win of the season. If you attended a game at the Pepsi Center this season there was a 82.9% chance the Nuggets gave you a win. And with a win tomorrow, Denver can guarantee a first-round playoff series at home ... the hard part is Denver must do that on the road.

Congrats to the Nuggets and their entire staff for giving us such an entertaining team at home this season. A great way to finish the 41st home game ... like Jay-Z's song says: ON TO THE NEXT ONE! 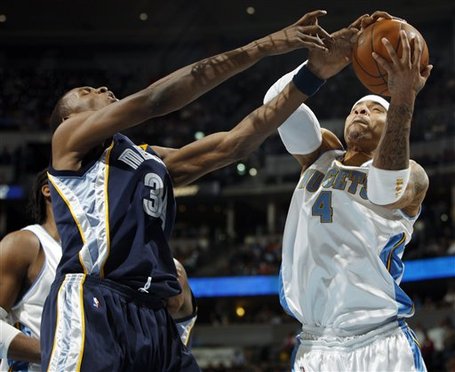 Welcome back Kenyon Martin ... you were sorely missed.

Arron Afflalo: what a professional. Goes out and records his first double-double and after the game he thanks the crowd for giving the team such great energy at home. What an addition! If you have yet to read Travis Heath's column on Afflalo being the biggest steal in the NBA ...do yourself a favor and do it now. Click here.

Melo: Got his foul shots tonight as he finished 8-9 from the charity stripe. I love when Melo plays to make his shots instead of to draw fouls. Melo scored 21 points in 31 minutes and looked like he is rounding into fine playoff shape as he was active on defense and lethal on offense.

Billups: Mr. Big Shot decided to be a point guard tonight! Billups finished with 7 assists in just 28 minutes. The last time Billups played 29 minutes or less ... March 3rd in Denver's 119-90 win over the Thunder. Great to see Dantley get his leader some bench time.

Nene: Can't believe I forgot to add Nene here! He bounced back in a big way tonight after his miserable performance against the Spurs. 20 points and 6 rebounds. The key for Nene was getting to the foul line by being aggressive and not really looking for fouls, but rather just attacking and letting the calls come to him. In just 29 minutes the Brazilian went to the line and hit 12-14 freebies. Honestly, Nene should be getting 8+ foul shots a night and it's not always his fault he isn't getting there (hint hint refs!), but his constant whining has to play a role in how he's treated by the refs (although it shouldn't).

Birdman: A tough game early for Bird as he seemed to be fouling and a bit out of sync. Bird did play 19 minutes and with Petro logging some time we now can get the best of Bird and his high flying self. A couple notes ... Bird finally shaved off his disgusting mustache (not sure if he shaved it before the Spurs game) and he also seems to be coloring in the background in red of the dunking man he has had tattooed on his right arm forever. I remember that tattoo when Bird first began playing with the Nuggets because it was like a self portrait of his game ... funny to see it all blended in now with all of his artwork.

Balkman: It was nice to see the Crime Stopper get off his bed of towels on the floor and into the game. Balkman spends so much time on the Nuggets' floor that his Twitter profile picture is of him laying on the floor. I don't think that's good ... it was good that he got in for 7 minutes tonight.

J.R. Smith: Dantley when asked after the game if they tell Smith not to launch those 35+ foot threes late in blowouts, "It's J.R. ... but, I'm glad we won the game." I guess nobody can totally get through to Smith's showmanship. A.D. said he doesn't think guys should be embarrassing their opponent the way J.R. does, but there is something to be said for a guy who plays to the crowd a little bit ... but just a little bit would be better.

Petro: I'm loving the minutes Petro is getting. At just 24 years-old Petro could still turn out to be a player in this league and the more time he gets will only help him. Scary moment in the second quarter when Petro was diving for a loose ball and Ty Lawson's leg caught him in the side of the head. It looked like antoher stinger injury for Denver, but Petro returned and even hit some jumpers late, but he did blow a monster dunk in the final period.

Lawson: Love the 20 minutes Lawson played. Loved the court vision and his 5 assists, 5 points and 0 turnovers. Now we just need Dantley to trust Lawson for 15-20 minutes in games that actually are close.