"I took the road less traveled, and that has made all the difference." -Robert Frost

Words to live by the rest of the way for the Denver Nuggets after tonight's 109-93 loss to the Dallas Mavericks.

If you are paying attention, you'll notice Andrew wrote tonight's preview and yours truly (Nate) will be recapping this miserable contest.

In his preview, Andrew wrote about the Jewish people wandering the desert for 40 years ... well if this Nuggets team is off wandering the desert then they must be very much like Clark Griswold (Chevy Chase) in Vacation at this point. A little bit crazy, dillusional, thirsty, with their pants around their heads and nearing death with each step. 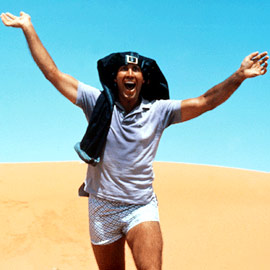 With tonight's 27th loss of the season, the Nuggets have now dropped down to the 5th seed in the Western Conference behind the Lakers, Mavericks, Jazz and Suns. A first-round matchup now would see the Nuggets facing the Suns (who have had Denver's number all season). The worst part...Denver wouldn't even have home-court in a Phoenix series if the season ended today.

The good news ... the Nuggets are off until Thursday when they face the Blazers. There are also a few more games still to be played and Denver can get to where they need to go by just getting into the postseason. Will things be more difficult for Denver if they are unable to recapture the second seed? Of course, but things are not impossible.

Players are bound to have bad games ... even stars like Carmelo Anthony and Chauncey Billups. Tonight both guys basically stunk up the building in Dallas. Entering the fourth quarter the two key Nuggets shot a combined 5-26 from the floor and finished the game 1-4 or 6-30 on the night.

From the opening tip the Nuggets' starters just didn't seem to have what it took tonight. The Nuggets found themselves down by as much as 17 points in the third quarter, but they did put up some effort as the game wore on. In the second quarter the Nuggets bench (notably Joey Graham, J.R. Smith and Ty Lawson) got the team within three points, but the starters were unable to keep up the aggressive play and the Mavs were able to recapture the momentum and push thier lead at the half to nine at 55-46.

For much of the third quarter it appeared the Mavs were going to run away with the game, but again Denver's bench came in and whittled the lead down to 10 points heading into the final quarter (79-69) thanks to J.R. Smith's elbow three-pointer (after being smacked in the face by Jason Kidd no less).

The fight from Denver's bench carried throught to the final period with Billups and Melo placed rightfully on the bench. The quarter started with Lawson getting free and hitting a bank-shot to cut the lead to 79-71 ... with a little luck the Nuggets might just get all the way back in this thing. Dallas then committed a shot clock violation and on the other end Nene drew a shooting foul. The big Brazilian was only able to hit 1 of 2 free throws (79-72 Mavs), but the Nuggets were within 7 points. As was the case all night, the Mavs hit a big shot when they needed it.

Dirk buried a three-pointer to push the lead back to 10 points and the Nuggets were only able to get the lead back down to 7 points one more time with a J.R. Smith runner, making it 82-75. The Mavs took a timeout to kill the momentum mounting by Denver and following the timeout Brendan Haywood received an inbounds pass near halfcourt and was unable to find an open teammate and quickly took another timeout. The Mavs looked a bit flustered and the Nuggets just needed an opportunity to get a little bit closer. It just wasn't to be ...

Coming off the 20 second timeout, Jason Terry (looking like an alien in his facemask) buried a three-pointer ... fittingly giving the Mavs yet another 10 point lead. From there the Nuggets magic just ran out and the Mavericks ran away with the game.

Tonight was just one of those nights where the bench guys had it going, the stars did not and the Nuggets just couldn't get over certain humps. It seemed for awhile that Denver wasn't going to get the lead under 14 points, but once they did they had another hurdle ... 7 points. The 7 point hurdle just wouldn't be relented by Dallas and the Mavs now have control of the second-seed in the Western Conference. I loved the Mavs trade for Caron Butler and Haywood and the move is really paying off.

Is Dallas a threat to take out the Lakers and make another run at the championship? I don't know, but I like their position and their chances a bit more than the Nuggets at this point. In the NBA positioning matters and Billups taught the Nuggets that last season as Denver treated regular season games with a little more importance then they have this season. The West is as brutal as ever and no playoff seed is going to guarantee anyone a win in any playoff series, but we could see home-court playing a big role this year and that might be something the Nuggets wish they had when it's all said and done.

For now, the Nuggets are traveling down a road less traveled and we'll find out what kind of difference that makes ...