Share All sharing options for: It rained, poured in Phoenix (Nuggets/Suns recap)

What we know about this Denver team is that when they play up to their capability, they can beat anyone. But when things start to go wrong the snowball effect can be tremendous and the Suns took care of business last night, beating the Nuggets 101-85, in what was a truly ugly performance by the road team.

Against the Lakers on Sunday afternoon the game was a tale of two halves. Last night against the Suns it was just a tale of one good quarter, followed by three lousy ones.

In the opening period, Denver looked pretty good. Energy levels were up, Melo was being aggressive attacking the rim and the Nuggets looked hungry to erase a disappointing loss from the previous day. The Nuggets recorded 4 assists and got to the free throw line a couple times and after the first quarter the Nuggets were in control of the game and up 33-24.

Anytime you hold the Suns under 30-points in a quarter you have to be pretty happy with your team's effort. And to start the second quarter things continued to look good for the Nuggets. Denver pushed the lead with a quick 4-0 run to 37-24 and the Suns called a timeout to regroup.

Coming out of the timeout ... everything changed, the Nuggets had Anthony Carter, J.R. Smith, Arron Afflalo, Kenyon Martin and Chris Andersen on the floor and this group has played together before, but you couldn't tell that last night. The Suns utilized a zone defense as the Nuggets had been attacking the paint at will and something about that zone completely threw Denver off their game.

Denver's next seven possessions would result in missed shots and turnovers (even a missed dunk by Nene) and a scoring drought from the 6:46 mark until Afflalo hit a three-pointer at the 5:09 mark would see the Suns go on a 16-0 run and take a 40-37 lead. That was probably the most frustrating stretch of the season and turnovers were happening so often that I even lost the remote control to my roommate who proceeded to try to watch the season finale of The Bachelor.

Actually, Jake's decision to pick Vienna over Tenley was just as ugly as the game last night, but that's neither here nor there.

Denver went into the half down 57-44 after surrendering a 33-11 second quarter. Watching that quarter was sort of like seeing your best friend get jumped and just beating to a pulp all the while you were left to watch in horror. Coming out of the break we learned that Chris Andersen wouldn't be able to continue playing due to his balky left knee.

The Suns came out and protected their 13 point halftime lead and never allowed the Nuggets to get back into the game ... which is weird because the Suns will let teams close the gap. The most interesting thing about the second half was finding out Chris Marlowe's nickname is "The Lion" because he had a great head of hair back in the day and Scott Hastings was known as "Super Sub," then "Super," and finally just "Soup." When the local announcers are talking about anything except the game at hand you know it's ugly.

Denver's road woes (14-16) continue and their lack of ball movement is still very puzzling in their losses. After the first quarter the Nuggets would only record 9 assists in the rest of the game and that is just unacceptable.

Hopefully these last two games where the Nuggets have basically fallen apart will stop, but for now the good teams in the NBA are giving the Nuggets as many fits as the sub .500 ones. 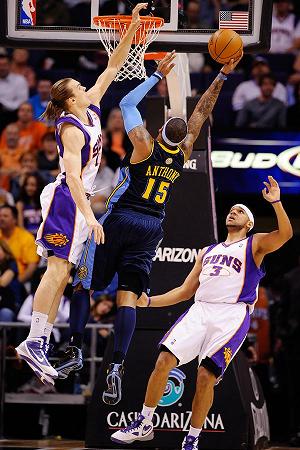 Check out Seth Pollack's take on Bright Side of the Sun (he has credentials and some good quotes from the game).