Nuggstradamus predicts the remainder of the regular season...

Share All sharing options for: Nuggstradamus predicts the remainder of the regular season... 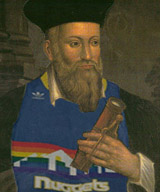 With the All-Star Game and subsequent trade deadline being the de facto "halfway point" of the NBA season, I thought we'd bring back our friend Nuggstradamus to find out how the Nuggets will finish the regular season.

Andrew Feinstein: Nuggstradamus, it's been so long since we last corresponded.  What have you been up to?

Nuggstradamus: I've been scrambling for work.  Because of this recession, people are cutting back on paying for prophecies these days.  Plus, they don't want to know how bad the future is going to be.  Making matters worse, I'm constantly chasing down money from clients.  You wouldn't believe what a cheapskate Tiger Woods is!

AF: Well, let's get right to it.  The readers of this blog and Nuggets fans worldwide don't quite know what to make of this team.  And that was before we were shocked by the sad news of George Karl's second bout with cancer and the disappointing news that nothing happened before the trade deadline.  Can this team actually win a title?

ND: Slow down there.  We only agreed to talk regular season and you're already trying to trap me into a playoff prediction.  Nice try, Feinstein.  But in regards to the regular season, I'm afraid I don't have good news for you.  Just like last season, three Western Conference teams will finish with identical 54-28 records: your Nuggets, the Jazz and the Mavericks.

AF: How do you figure?

ND: As my childhood friend Woody Paige (we're contemporaries, you know) would say: look at the schedule!  To wrap up February, the Nuggets are going to beat the Warriors on Thursday night to prove to the world that they can win for their coach, even when he's not there.  Then they're going to exact some revenge on the Pistons who humiliated them in Detroit earlier in the season.  Boy, was that a bad loss...the Pistons were missing their three best players and were playing the second of a back-to-back, your Nuggets - missing only Kenyon Martin - had a full day's rest in Detroit and still managed to lose.

AF: Ok, ok.  No need to bring back bad memories.  You're supposed to predict the future, not talk trash about the past, remember?

ND: Gotcha.  Where was I?  Oh, February.  After racking up back-to-back wins, the Nuggets will lose at Los Angeles to the Lakers on Sunday.  No way they go up 3-0 in the season series against the NBA's best team.

AF: Thank you for the reverse jinx, now go on...

ND: Ok.  Moving on to March, this is where things are going to get ugly for your Nuggets.  You've got four back-to-backs, including an at Orlando/at Dallas back-to-back.  As my Jewish grandmother would say, oy!  I foresee the Nuggets winning ten of their 16 games in March.  The losses will be at Phoenix on March 1st, at New Orleans or at Memphis on the 12th/13th back-to-back, at Houston on the 15th, at Boston on the 24th and I'm afraid they're losing both at Orlando and at Dallas at month's end.  But don't be surprised if they lose another game or two in there somewhere and finish the month 8-8.  Like I said, it's going to be ugly.

ND: Even though the NBA fixed it for the Lakers to have as much rest as possible prior to that game in question, you're still going beat the Lakers when they come to Denver.  But don't read anything into it.  By that point, the Lakers will be coasting to another one-seed in the Western Conference and will have already conceded home court advantage in the Finals (if they get there) to the Cavaliers.  You are, however, losing at Oklahoma City and at Phoenix.  In other words, you're finishing April 5-2 and the regular season 54-28.  Not too shabby considering the injuries you've had to overcome and the 22 back-to-backs handed to you by the NBA.

AF: And how exactly are the Jazz and Mavericks getting to 54 wins apiece?

ND: Simply put, they have much easier schedules and the Mavericks did a great job re-arming themselves with the Caron Butler/Brendan Haywood trade.  Consider this: 18 of the Nuggets next 26 opponents are plus-.500 teams compared to just 15 of the Jazz's next 27 opponents being plus-.500 and 16 of the Mavericks next 26 opponents being among the NBA's upper tier teams.  But the Nuggets play better against the top quality competition and they're historically good closers down the stretch, whereas the Jazz and Mavericks will get tripped up by a bad team here and there.  Hence why they'll all have the same record at season's end.

AF: And dare I ask who will own the tiebreaker...

ND:  Unfortunately for you, it'll be the Mavericks.  After beating the Nuggets in Dallas on March 29th (remember, the Nuggets will be playing the second of a back-to-back while the Mavericks will have had a full day's rest), the Mavericks will have a 2-1 series edge over Denver.  And even though Utah will own the season series record over Dallas, NBA rules stipulate that in a three-team tiebreaker, the first tiebreaker goes to division winners with the second tiebreaker going to head-to-head winning percentage.  So, your Western Conference top four will be 1) Los Angeles Lakers, 2) Dallas Mavericks, 3) Denver Nuggets and, 4) Utah Jazz.

ND: Why the long face?  Before the season you yourself predicted that the Nuggets would finish fourth in the Western Conference and also predicted that the 2009-10 season would finish up similar to the 1985-86 season when the Nuggets finished third in the conference and battled admirably in the playoffs.  You were dead wrong about San Antonio and Portland being better than Denver, but at least you had the Nuggets seeding pegged just about right.  Cheer up, you just might have a future as a seer like me!

AF: I don't give a crap about about my ability to predict the future.  I just want the Nuggets to get to their first NBA Finals ever.  Ever!  Do you realize we're the only holdover franchise from the ABA not to make an NBA Finals appearance.  I mean, even the @#$%& Pacers and Nets have made NBA Finals appearances!

ND: Ah, but they play in the Junior Varsity conference.

AF: Touche.  But regardless of where the Nuggets finish in the Western Conference seeding, they could still go all the way, right?  Right?

ND:  Even though I explicitly said that we weren't going to discuss the postseason, I can see you're shaken up so I'll make a one-time exception.  So while the Nuggets will finish third in conference seeding, I do foresee that they... Oh, wait, I've got Tiger on the other line.  He probably wants to talk about where he'll finish in the US Open.  Gotta run.  Good luck to your Nuggets and be sure to call me right before the playoffs begin...