Nuggets head coach George Karl might be feeling down physically these days, but emotionally he - like all of us in Nuggets Nation - must be feeling exceptionally high tonight.

Having watched every single Nuggets/Cavaliers game during the Carmelo Anthony/LeBron James Era, this was hands down the best of the bunch.  We as NBA fans were privileged to witness an exceptional duel between two great teams led by their two great super stars.  And we as Nuggets fans were even more privileged to witness a remarkable Nuggets victory.

Simply put, Melo and LeBron were spectacular tonight.  While the Nuggets and Cavaliers have had some good contests over the years with these two in the league, rarely do both players play so exceptionally well against each other.  LeBron's 43/13/15 game can be matched only by a performance by "Pistol" Pete Maravich...in 1974!  And Melo proved once again why he might be the best clutch shooter in the NBA.

I think it's safe to assume that Melo's ankle has healed up, because he was demonstrating the aggressiveness in driving to the basket we got accustomed to seeing earlier in the season.  Remember, it was performances like this from Melo that got the MVP talk going.  When I looked at the box score at game's end and saw that Melo attempted 16 free throw attempts, I smiled from ear to ear.  Between Melo's All-Star Game performance and tonight's all-time performance against the NBA's best regular season team, it looks as though Melo's mojo is back and then some.

Not to be lost in the adulation lauded on Melo were the performances of his teammates.  Kenyon Martin was exceptional on the glass tonight, routinely being in the right place wherever the ball seemed to be.  Chauncey Billups may not have shot well over all, but he made good choices including an overtime corner three-point dagger right in LeBron's face.  And lest we forget J.R. Smith's scoring and Arron Afflalo's defense, both were invaluable in securing tonight's victory, arguably the Nuggets biggest of the season.

On a curiosity note, I'm assuming the readers of this site noticed the multiple occasions when Billups took over as head coach by vetoing Karl.  According to the TNT announcers, Billups suggested a play towards the end of regulation to set up Melo for an isolation play (which resulted in Melo's amazing spin move score on the Cavaliers Anderson Varejao) that Karl agreed with.  And we all witnessed the most peculiar moment of them all, when at the very end of regulation Karl was barking for a timeout and instead Billups decided to push the ball and go for the win.  Could Billups be preparing for upcoming games when Karl won't be on that bench?  And no offense to the Nuggets assistant coaching staff, but I think most of us in Nuggets Nation would feel better with Chauncey running the show during Karl's absences anyway.  Just an observation.

Also, tonight's win gave the Nuggets organization some vindication for not making a move before today's trade deadline simply to make one.  I was driving around a lot today and got to listen to local sports talk radio where the vitriol spewed out against the organization for not making a deal was endless.  I'm not saying it wouldn't have been nice to bring in someone, preferably a big man given that Chris Andersen might be hurt now.  But I never felt bringing in a new body was necessary.  I guess time will tell on that one.

This has been an emotionally heavy week for the Nuggets head coach, the players and all of us that love this franchise and this team.  But for a few hours tonight, we were treated to the best distraction of all: a great basketball game that was hard fought and well played.  This is what the NBA should be all about.

-Carmelo Anthony: Tonight's 40 points (including the game winner), six rebounds, seven assists, two blocks and 16 free throw attempts performance by Melo has to go down in history as one of his best ever.  In addition, Melo was tasked with guarding LeBron for much of the game.  Melo is already demonstrating that he's going to embrace the leadership role demanded of him for the remainder of the season...especially when Karl has to stay away during his treatments.

-The Referees: I'm not a blame-the-refs kind of fan (well, maybe sometimes) but the Nuggets were playing five-on-eight for much of this game (five Cavaliers plus three NBA officials).  The refs collection of suspect calls and non-calls made no sense, but certainly aided in getting the Cavaliers 14 more free throw attempts than the Nuggets.  Thankfully for the Nuggets, the Cavaliers stunk at the line, missing 17 of their 40 attempts. 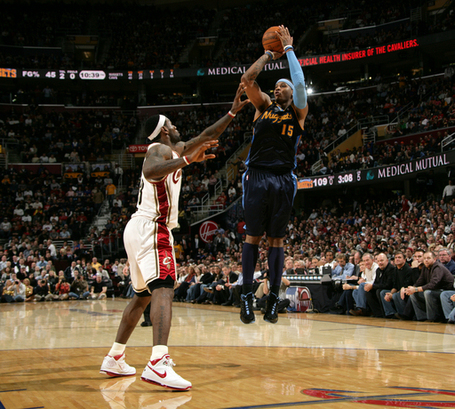