If tonight's Nuggets victory over the Magic proves to be Carmelo Anthony's last in a Nuggets uniform, then he leaves on a high note having put up 35 points (on a very impressive 14-21 shooting) and grabbing 11 rebounds.

There was nothing 1970s about "70s Night" at Pepsi Center other than the final score.  I'll get to the game recap and the ongoing Carmelo Anthony situation shortly, but I first must point out - yet again - that the Nuggets organization appears to be clueless when it comes to in-game presentation and promotion.  Having a "70s Night" is a great idea if properly executed.  Instead, the Nuggets dropped the ball.

Instead, all the ticket-paying fans got for "70s Night" were cheerleaders wearing pseudo-70s outfits, Mark Randall wearing a Maxie Miner T-shirt, a 70s band at halftime that no one has heard of and a few male cheerleaders wearing fake Afros.  No acknowledgment was made at any point in the evening of the Nuggets' thrilling 1970s history that helped revolutionize basketball as we know it today (somewhere, Denver Stiffs reader "Thursty" has his head in his hands).  "70s Night" - like the opposition Orlando Magic in the fourth quarter - was a total dud.

But I suppose this is what happens when your franchise is distracted and consumed by the likely departure of its best player...and arguably best player ever.  As has been discussed and "reported" ad nauseum for months now, Carmelo Anthony probably isn't going to be a Denver Nugget past February 24th.  And now, he may not be a Denver Nuggets past December 24th.  Or even sooner.  As in tomorrow.

While leaving Pepsi Center tonight, I was informed by a few friends (including Denver Stiffs own Jeffrey Morton) that Channel 7's Lionel Bienvenu "reported" that Melo had been traded to the Nets, presumably for Derrick Favors, Troy Murphy's expiring contract and a plethora of draft picks.  And then soon thereafter Bienvenu had to rescind the report.  Looking at Bienvenu's Twitter account right now, he's already hedging:

lionelbienvenu Lionel Bienvenu
If Melo does not agree to sign extension with Nets, trade's dead. in Melo's court now. If deal was done he wouldn't have played 2nite

And our man Chris Tomasson - one of our few reliable sources - Tweeted the following:

christomasson Chris Tomasson
Melo also said has never heard of reporter who reported it: "Everybody has their own opinion... But I don't know where that came from.''
23 minutes ago

christomasson Chris Tomasson
A Nuggets official said rumor is false. I just talked to Melo and he said, "It's terrible. There's no truth to it.''
25 minutes ago

christomasson Chris Tomasson
Rumor going around about Carmelo Anthony being traded to New Jersey is said at the Pepsi Center to be false.

So I guess we will get to see Melo in Denver when the Spurs come to town on Thursday night.  But it doesn't change the fact that the Melo story was, is and will continue to be a colossal distraction for the Nuggets until something is done.  George Karl shouldn't get Coach of the Year for steering the Nuggets ship admirably after surviving a second fight with cancer and having no big men to play with.  He should get Coach of the Year for dealing with this Melo fiasco and having his team sitting at 15-9 and in the Western Conference playoff hunt in spite of all the nonsense surrounding his team.

Other than the Nuggets organization putting on a crappy "70's Night", there wasn't much in the way of distractions on the court against the Magic tonight.  A competitive game through three quarters erupted into a fourth quarter walkover with the Nuggets - sans Chauncey Billups - firing on all cylinders.  I was lucky to trade my usual tickets with Denver Stiffs reader "Mordecai" for seats right behind the Magic bench, giving me a unique perspective on the game.

Here's the View From the Not-So-Cheap-Seats...

...from pre-game warmups until he walks out of the tunnel at game's end, Magic center Dwight Howard continually interacts with the crowd and never stops fooling around.  I've always liked Howard, but now I love him.  He doesn't take himself too seriously and makes the game fun.  Before tipoff, he mocked LeBron James with a fake hand-powder clap gesture.  On his way to the bench, he sings the songs blaring on the loudspeakers.  At game's end, he tossed his jersey and shoes into the stands.  And he never stopped smiling (until the Magic imploded in the fourth).  Howard oozes charisma and is one of the reasons we should love the NBA right now.  I can't say enough about how much fun it was to watch Howard tonight.

...George Karl was honored before tipoff with a trophy commemorating his 1,000th coaching victory.  Presenting the trophy was Nuggets soon-to-be owner Josh Kroenke and general manager Masai Ujiri.  From that point forward, Kroenke and Ujiri were nowhere to be found and never sat in their usual seats.  Gee, I wonder what they were up to?

...Howard's moves around the basket have improved dramatically, evident by his 14 first-half points.  Perhaps Howard should have taken the second half more seriously, however, as he finished the game with just 21 total points.

...as has become customary here at Denver Stiffs, whomever I call out as a Stiff before the game inevitably lights up the Nuggets.  Tonight it was J.J. Redick's turn, who erupted for a season-high 29 points on 9-12 shooting (6-9 from three-point range).  And Redick wasn't just making open shots, he was hitting shots with defenders right in his face.  It was a very impressive performance from Redick.

...Carmelo Anthony played hard throughout the game, as if he was channeling all of the confusion about his future into fuel for the game.  Has Melo had a more efficient offensive game all season?  Oh, and his knee looked just fine.

...not only was Melo never booed, but he was cheered loudly throughout the game.  Nuggets fans are showing lots of class all things considered here.

...when referee Steve Javie tee'd up "Number 15!" in the first half I thought for sure Melo got another technical.  Instead, it was on Orlando's Vince Carter for talking trash after nailing a three-pointer.  This ultimately won't matter as Melo's technical fouls will transfer to his next team (ok, I had to).

...beginning the second half, J.R. Smith could be seen talking trash to Howard and Carter.  It was pretty funny.

...Rashard Lewis' game is worse than I thought.  More on him shortly.

...J.R. - accurately dubbed "the one-man comeback" by Altitude's Scott Hastings - was incredible in the second half.  But as Mordecai pointed out to me, J.R. can also be "the one-man loss" if he's not hot.

...Ty Lawson filled in admirably for the injured Billups, but backup point guard - and Denver Stiffs reader favorite - Anthony Carter deserves credit for holding down the fort when Lawson sat.  A.C. had a huge steal when he ripped the ball away from Howard in the fourth quarter that cemented the Nuggets win.

...Nene disappeared for much of the game, reminding Nuggets fans everywhere why he's still not an All-Star.

...watching Stan Van Gundy up-close is a treat.  He's quite a contrast from Karl.  While Karl sits patiently, Van Gundy is always standing and always yelling.  As the Magic began to unravel in the fourth, all I could hear out of Van Gundy during a timeout was "fuck!", "shit!", "motherfucker!", "shit!", "fuck!" and couldn't make out what else he was yelling.  It should be noted that all of his players had tuned him out by then, too.  Van Gundy is still one of my favorite coaches.

...Javie still endures a lot of heat from Denver fans, notably for his past run-ins with Nick Van Exel, Dan Issel and Allen Iverson.

...the Nets picking up two more first round picks today kind of says it all, doesn't it?

NON-STIFF OF THE NIGHT

-Carmelo Anthony: For the first time in a month's worth of play, Melo shot well over 50%.  He also attempted more than 10 free throws, pulled down 11 boards and finished with a +/- of +17.  We didn't need a reminder of how sad a post-Melo world will probably be here, but we got one tonight.

STIFF OF THE NIGHT

-Rashard Lewis: 2-9 shooting and virtually zero production in all other areas of the game.  Overpaying for Lewis might have netted the Magic one NBA Finals appearance, but this investment threatens to keep them out of any future Finals appearances.

Melo deserves credit for not letting the trade rumors distract him on the court, but enough is enough already.  If Melo does indeed what to be elsewhere, the Nuggets need to move him.  We don't need to be spending our nights at Pepsi Center asking: "is this Melo's last game as a Nugget?" 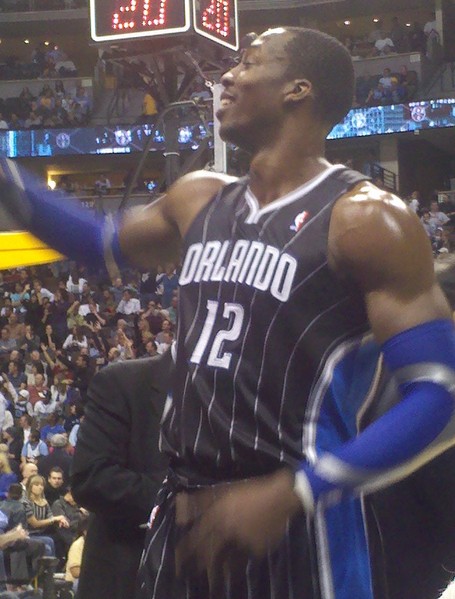