Share All sharing options for: Jazz vs. Nuggets: Welcome back, George! (7pm MDT)

The greatest comeback of the 2010-11 NBA season begins before the balls even tip-off on Wednesday night. And that's when Denver Nuggets head coach George Karl returns to the sidelines after battling cancer for the second time in his life.

As the 2010 playoffs opened I visited with my friend George Karl. His face and neck were fried from multiple rounds of brutal radiation treatment in an attempt to eradicate the throat and neck cancer that had stricken him. He struggled to get up from his favorite chair. He had to eat from a feeding tube inserted into his stomach. And he had lost so much weight that he looked like half of himself. If that.

At the time, rumors abounded that had the Nuggets been able to beat the Utah Jazz in the first round, Karl would return to coach the team against the Los Angeles Lakers. Visiting with Karl and his family that evening, I couldn't imagine Karl gracing the sidelines just a week later. But I had no doubt he'd be back this season. No doubt whatsoever. Despite barely being able to talk and moving ever-so-gingerly, Karl's feisty, never-say-never spirit was alive. He served up ample trash talk towards me. He couldn't sit still in that chair watching basketball. And he couldn't stop talking even though he wasn't supposed to speak much on his doctor's orders.

After saying our goodbyes that night I wouldn't see Karl in person again for several months. But in the intervening period between visits, he made my - and I suspect many of your - eyes well up with tears during his moving appearance on ESPN's ESPY Awards. At the awards show, a thinned-out Coach Karl took the stage to accept the Jimmy V Perseverance Award in honor of the late Jimmy Valvano and gave a heart-felt, inspirational speech about battling cancer...for the second time in his life...a speech that can be applied to anything in life. Watching that incredible speech, I knew it was guaranteed that Karl would be back this season.

Well, my fellow Stiffs, I'm here to tell you that not only is Coach Karl back but he's as vibrant and energetic as ever. And, of great importance to Nuggets fans, he's very bullish on this Nuggets team.

I had the pleasure of having dinner with Coach Karl on the eve of the Nuggets 2010-11 season opener. We met for dinner at the new Jake's restaurant in Denver's River North Arts District (host location for our November 6th "Stiffs Night Out" event) along with Karl's entourage that included his lawyer/business partner/close friend Bret Adams, real estate barons John and Chris Ferchill and Karl's former wife Cathy, whom he remains close with. All are in town to support the man they love as he takes to the court on Wednesday night.

The turnaround in Karl's health, compared to his condition just months ago, is nothing short of remarkable. He looks fit, his voice is back and the fire in his eyes are burning bright. He can't stop talking about basketball, present and past. Throughout our dinner Karl grilled myself and Uncle Marty - aka the Nuggets Curmudgeon - with some tough basketball-related trivia going back 50 years. And when the topic of this current Nuggets team came up, Karl sat up and immediately showcased his enthusiasm, noting that the Nuggets 144-106 drubbing of the Phoenix Suns in their final preseason game - sans Melo,Chauncey Billups, Al Harrington, Nene, Chris Andersen and Kenyon Martin - could be a sign of things to come. When I mentioned that I almost regretted renewing my tickets after the Nuggets raised the prices, Karl was quick to point out how much fun this Nuggets team will be to watch. (Maybe Karl should work for the Nuggets ticket sales department.)

Simply put, the man is ready to do what he does best: coach basketball. And the Nuggets - as predicted by myself, Nate and Jeff - are going to be damn good because of it...as long as Carmelo Anthony stays in Denver, of course.

The many contract-related questions surrounding this Nuggets team remain and may persist for an entire season. Karl himself is not immune to them, as noted by Fanhouse's Chris Tomasson on Tuesday. But Karl's recovery should make any one individual contract issue look like an afterthought. Karl's recovery should inspire this cast of players - many of whom have been here with Karl for multiple seasons - to elevate their games for the good of the team, regardless of what uniform they may be wearing next season. After all, if their head coach can battle back from cancer within six months, the very least these guys can do is grab extra rebounds, take better shots and play intense, focused defense.

The emotional level at Pepsi Center for Karl's first regular season game since his treatment began will be at an all-time high. I can't wait to hear Karl's name announced on the public address system and the chorus of cheers sure to follow.

It's the greatest comeback story in sports this year. 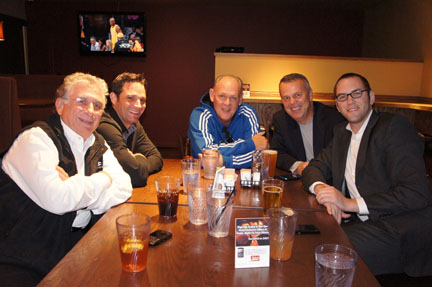 Yours truly joins George Karl and his entourage on the eve of opening night.
(Photo courtesy of Robert Bullock)

Not to be overlooked on Wednesday night will be the Nuggets formidable opponent, the Utah Jazz. Even though Carlos Boozer, Kyle Korver, and Wesley Matthews are gone, I predict the Jazz to be close to where they were last season.

-Deron Williams: A lot of Nuggets fans were disgusted at Williams assortment of flops during the playoffs against the Nuggets in April. I saw something else: the NBA's best point guard single-handedly dismantle a more talented team. I'd take Williams over any other NBA point guard today.

-Al Jefferson: Gets to fill in for Carlos Boozer and looks to have a monster season as a result. He better, because Big Al is on my fantasy team!

-Jerry Sloan: The Hall of Famer enters his 23rd season as the Jazz's head coach and shamefully has never won the NBA's Coach of the Year Award.

-Mehmet Okur's heel: Hardly a Stiff when he plays, Okur is out indefinitely as he continues to recover from rupturing his Achilles tendon against the Nuggets in the playoffs.

***SAVE THE DATE! November 6th is "STIFFS NIGHT OUT" at the new Jake's restaurant. Watch the Nuggets take on the Mavericks with your fellow Stiffs. Drink and food specials will be offered and we'll be playing Nuggets trivia for prizes at halftime.***