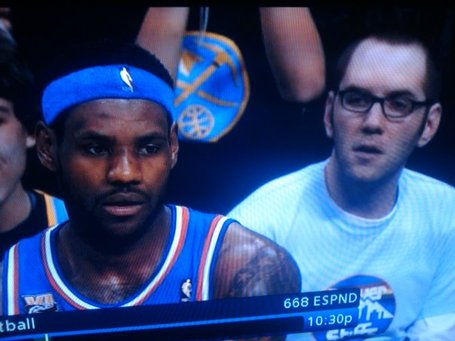 Kudos to George Karl and the Nuggets players for getting their season back on track with a big W over the Cavaliers...

Yours truly had the privilege of sitting right behind the Cavaliers bench (see picture) courtesy of my life long friend and Denver Stiffs reader "Mordecai."  I'd argue that Mordecai's seats are some of the best - if not the best - at Pepsi Center (and it's absurd that my tickets cost the same as his, but I'll address that when I write my column on the many things the Nuggets need to do to improve the fan experience) because you get as close as possible to the Nuggets nightly opponents.

Tonight's opponent were the star-studded Cavaliers, winners of 13 of their last 15 games and in theory, the Nuggets sans Carmelo Anthony had no chance of besting them on Friday night.  So much for theories.

The Nuggets were able to keep the game even throughout and thanks to some stingy defense and some careless LeBron James mistakes, the Nuggets earned a much needed victory and confidence boost.

The View from the Not-So-Cheap Seats...

...the Cavaliers clearly have good camaraderie among the players.  LBJ joked with teammates, the Cavs traveling ballboy and even Nuggets fans during introductions and everyone was having a great time.  That wouldn't be the case 48 minutes of basketball later.

...Shaquille O'Neal didn't look as bad as I thought he would.  I felt the same way watching Allen Iverson up close on Sunday night.  Before getting himself into foul trouble, O'Neal gave the Nuggets front line of Chris Andersen, Nene and Kenyon Martin fits defensively.

...I might have a hard time calling Birdman a "big man" anymore.  Not only did he look minuscule next to Shaq, but even Anderson Varejao was substantially bigger than Bird.  Additionally, Birdman is clearly banged up and looks several steps slow.

...Mike Brown doesn't coach, he delegates.  One of the Cavaliers assistants draws up all the offensive plays on the dry erase board while another assistant draws up all the defensive plays.  No joke.  Brown observes, barks, cheers, etc but doesn't draw up the plays himself.  In fact, throughout the entire game, Brown touched the dry erase board just once.

...it appears as though Chauncey Billups has rehabbed properly this time.  Admitting to the media that he came back from his groin injury too soon in attempting to play at Portland on Christmas Day, Billups looked sharp and sprightly tonight.  He set the tone early and never wavered, putting yet another nail in the "Melo for MVP" coffin.

...LBJ checks the stat sheets that the media relations people hand out during the game.  When I asked the Cavaliers media person why this is, she told me that LBJ "is very statistically oriented" and uses stats in working on his strategy throughout the game.  When I told my Cavaliers fan friends this after the game, they called bullshit.

...At some point in the third quarter, LBJ and Brown went at it during a Nuggets free throw.  They yelled back and forth about LBJ's defensive position on the play before, with Brown barking that LBJ needed to cover one of the Nuggets bigs while LBJ barked back that that would have been an illegal defense call.  When the Nugget (I don't remember who) finally sank his second free throw, Brown shut up, LBJ shut up for a beat, and then turned to the assistant coaches and yelled: "I'm right!!"  That was the quote of the game.  The argument continued during the next game break and Mo Williams had to calm LBJ down.

...Shaq didn't seem to mind being in foul trouble, had a pleasant demeanor on the bench and was very supportive of his teammates during timeouts and game breaks.

...thank god (again) for Kenyon Martin.  What a first half!

...Arron Afflalo is playing with more and more confidence with each passing game and it seems like Karl is finally realizing that he's allowed to play in the fourth quarter.

Stiffs of the Night

-Carmelo Anthony: I'm sorry, Melo apologists, but how was it that Melo was able to support his teammates from the bench tonight but couldn't be bothered to appear beside them for the last three games?  I have the answer: because this game was on ESPN!  Shame on Melo and any player who doesn't stand by his teammates when injured.

-Mo Williams: After praising Williams' recent performances in big games, Mo shoots 4-11 and was a non-factor.

-LeBron James' turnovers: Eight turnovers?!  LBJ was careless with his footwork all night.

-Chauncey Billups: Welcome back, Mr. Big Shot!  As noted above, Billups was terrific from the get-go tonight, further cementing his status as the Nuggets MVP.  Before the game, I (wrongly) suggested that the Nuggets couldn't beat the Cavs with Billups but sans Melo.  When will I learn?

-George Karl: Karl has taken a lot of criticism around here lately (from me included), but he deserves credit for having the Nuggets ready tonight against one of the NBA's best teams.  I particularly liked the lineup of Billups, Afflalo, J.R. Smith, K-Mart and Nene down the stretch.  The Nuggets don't win this game without that lineup.

And my now famous picture, one more time...