If you were lucky enough to have a Physical Education in high school, often towards the end of the class period the coach/teacher would shout, "Last team to score wins." Well, that is exactly what tonight's thrilling Nuggets vs. Warriors game felt like ... an offensive showdown where the last team to score won. And luckily for Denver fans it was the Nuggets who scored last.

In my preview for this one I talked extensively about wanting Denver to show effort and if they did that than win or lose I'd be happy. Well, a funny thing happened tonight ... the Nuggets exerted a lot of effort on the offensive end and had Denver lost it would have felt like getting sucker punched.

The Nuggets were able to gain control of the game about midway through the second quarter. Denver would push leads and the Warriors (right in character) would bounce back with some hot shooting and get right back into the game. It felt like the Nuggets would assume total control at some point as the Warriors were bound to cool off at some point. That wasn't the case. Denver was getting to the rim, hitting difficult shots and hitting shots from the outside. The Warriors were relying more on a perimeter game and jumpers and usually teams can't maintain their hot outside shooting, but Golden State is an atypical team and did remain hot and even got some very easy buckets at the rim from time-to-time. Denver's defense just couldn't get stops and their offense would go into lulls with multiple turnovers. So, instead of Denver running away with the game it would be the Warriors who would capture the game late and look to put things away.

At the 4:10 mark of the fourth quarter Ty Lawson drove in from the elbow and came down awkwardly on his left ankle, he would leave the game and the Nuggets had been utilizing his penetration all night. At this point Denver was down 111-109 thanks to a Stephen Curry three-pointer. With Lawson out the Warriors put together a quick mini-run and grabbed a 120-115 lead with just 1:51 left on the clock. The Nuggets looked dead in the water with momentum gone and their slashing point guard sidelined. But the Nuggets didn't quit as J.R. Smith made a vicious two handed dunk through the lane and Anthony Carter hit two clutch free throws after Corey Maggette turned the ball over and committed a foul. Suddenly, just 30 seconds later, Denver was down just one 120-119.

Denver was able to come up with a loose ball and their third straight stop after Curry missed a runner and Ronny Turiaf fumbled the ball in the paint. With about 39 ticks left on the clock I was hoping Denver was going to go two-for-one on possessions and take a quick shot, but that didn't happen. Instead, Joey Graham got the ball with the clock winding down and took a difficult jumper from the baseline that Monta Ellis got a piece of ... the ball was sailing short and like he did all night, Kenyon Martin was there for a quick redirection and score. Denver leads 121-120, but 24.9 seconds remained on the clock.

The Nuggets were unable to come up with their fourth straight stop as Ellis hit a little floater in the paint and things looked very grim for Denver, down 122-121 with just 15 seconds remaining. Joey Graham was a hero all night and when the ball wound up in his hands from the elbow and he launched a three, you just hoped the shot would fall ... it didn't and Nene wasn't able to secure the rebound, but a jump ball was called between Arron Afflalo and Maggette.

J.R. gained possession of the jump ball and coach Karl immediately called for a timeout with 1.4 seconds remaining. The final inbounds play would be thrown in my K-Mart to Smith and J.R. floated towards the sideline just inside midcourt and loaded up a double-clutch three-pointer. As the shot left Smith's hands the right side of Ellis' body collided with J.R. and the refs blew their whistle and sent Swish to the line for three-free ones. I was watching the game on DVR and just caught up live at Smith stepped to the foul line. On the phone with my buddy Rory we discussed how Smith had missed free throws in this position before and his poor foul shooting this season was not a comfort. Swish nailed the first foul shot and then the second. Smith intentionally missed the third, but the ball went directly to a Warrior and they were able to get 0:01 seconds on the clock to try for a miracle tip-in. Martin batted the inbound lob pass away from the awaiting Anthony Randolph and Denver secured the win 123-122. 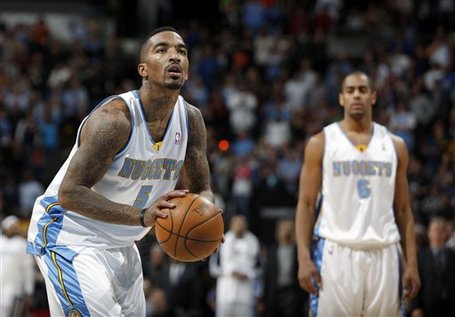 It was a crazy ending to a crazy offensive game. The foul on Smith was indeed a foul on Ellis, but we've all seen plays like that at the end of games result in no calls. Denver was fortunate to get get a whistle and Smith did what he needed and secured the win. You play the game the refs call and Denver, not luckily (correctly, but sometimes not called), finished the game.

Notes from the night:

It was great to see Denver get back in the win column at home and it couldn't have come at a better time with LeBron and the LeBron's coming to town on Friday.

More on the foul or non-foul:

The NBA is a funny sport. In what other sport do the fans know that the officials are going to "let the players determine the outcome" most of the time?? When is a foul not a foul? Supposedly at the end of games when the refs are supposed to or often swallow their whistles.

At the end of close games fans have been conditioned to think whether a foul is committed or not that the call should not be made and decide the game. Why? What kind of logic is that? It's basically "cheat to win" if you are a defender and you know you can pretty much get away with murder at the end of games.

Often in the NFL you will see a costly pass interference call made on a deep pass towards the end of games that will result in game winning field goals. Why is that call made? Because there was a penalty and to not throw a flag would be shameful. Why is the NBA different? If a player is fouled on the last shot of the game and there is no call then the refs cost that team a fair chance at changing the outcome of the game.

This does not stem just from the call last night. This is yet another issue with NBA officiating. Against the 76ers Ty Lawson drove the lane and hit a layup as he was fouled, but he did not get the call that could have resulted with him hitting a free throw to tie the game. Last night against Golden State Monta Ellis wasn't so lucky and he committed a great basketball no-no ... he didn't go straight up in an attempt to block J.R. Smith's shot. And while Ellis didn't hack J.R. Smith he did come into contact with Smith's body as his body was leaning into Smith. The refs called it and whether they blew the whistle or not fans on either side have a gripe. For Warrior fans they can and have said, "the refs never blow the whistle there!" And if the refs didn't blow the whistle Nuggets fans would have been able to say that it was indeed a foul and the refs cost Denver a chance to tie or win the game.

For me this is just another in a line long of issues with NBA officiating. Even on the Warriors last scoring possession, Stephen Curry had an obvious carry and Monta Ellis was allowed to slightly tap the ball to himself across the paint before hitting his turnaround bank shot. Had Denver missed their last shot George Karl said in an interview with Travis Heath of Hoopsworld that:

Karl returned fire saying: "I could also send in the video of their palms and (traveling violations) before that.  It was a tough game to referee."

It was a crazy ending to a offensive showdown and whichever team would have lost had reason to be upset with the last few calls, but had either team played a little defense and come up with a few stops here and there ... none of this would really have mattered. When you leave the game up to human officials in the NBA ... outcomes may vary.