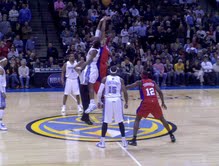 After being pounded in the press for not consistently beating sub-.500 teams, our Nuggets seem to have gotten back on track against the NBA's lesser squads.  The hard work, however, lays ahead.

Last night's victory over the Clippers was yet another snoozer in a long line of snoozers that we've seen at Pepsi Center this season when the opposing team is playing the second of a back-to-back.  Most of these games follow the same pattern that we witnessed last night: the opposing team puts up a surprisingly good fight in the first half, the Nuggets don't take the first half seriously, George Karl (presumably) demands a good third quarter out of his squad during halftime, the Nuggets kick ass in the third quarter opening a big lead, and the two teams trade baskets during a meaningless fourth quarter.  Frankly, when the opponents are on the second of a back-to-back, they should just stop playing fourth quarters so fans can go drinking in LoDo a half hour earlier.

But this is what good teams do.  Coast in the first half, dominate the third quarter, trade baskets in the fourth quarter.  I watch a lot of Lakers and Cavaliers games, and their games almost universally follow the same pattern.  And I certainly wouldn't mind seeing the Nuggets stay among those elite teams for the foreseeable future!

Carmelo Anthony: Regular readers of this blog already know the number I'm going to point to - 16.  That was the number of free throw attempts Melo had as he continues to rack up free throws, perhaps the best sign that he really "gets it" this season.  The number is even more impressive considering Melo didn't play for much of the fourth quarter.  And even though he only had two assists, Melo made some great passes to set up teammates for easy buckets.

Kenyon Martin: The only thing that pisses me off about K-Mart these days is that I didn't immediately pick him up for my fantasy team when Melo got hurt a few weeks ago.  It's as if K-Mart is getting better with each passing week.

Chauncey Billups: Speaking of "getting it," Billups has settled into a groove that includes consistent shooting...making him even more dangerous than he already was.

Stiffs of the Night