The MVP of the Denver Nuggets is Chauncey Billups. Since his arrival in Denver old number seven and new number one has proved his new jersey numeral fits his importance to the Nuggets. Billups’ 10 points in overtime won the game for the Nuggets as he adds to his growing legacy.

The reasons the Warriors were able to stay with the Nuggets all night? Their guards converted outside shots, Monta Ellis created havoc whenever he had the ball and Golden State’s big men had no problem laying up or dunking uncontested shots.

Ellis, Corey Maggette and Stephen Curry combined for 87 of the Warriors 118 points and it seemed like Maggs and Ellis (72 combined points) were never going to stop scoring. As the game drew to a close it appeared that Denver was going to have enough to hold off Golden State, but some hot shooting at the end of the fourth quarter sent the game to overtime.

With 5:45 left in the fourth quarter the Warriors held a 95-92 lead and I just sensed that one of the teams was ready to go on a scoring run and hoped that Denver was going to be that team. Over the next few minutes the Nuggets went on a 12-5 scoring run and Kenyon Martin’s 11th rebound that he stuffed home gave Denver a 104-100 lead with just 1:49 left to play. Should have been game over for Denver.

The Warriors didn’t quit and Ellis hit the game tying three-pointer to make it 105-105. Carmelo Anthony did his best to win the game on the Nuggets’ final possession, but like much of his second half he just couldn’t muster any magic. Melo’s drive to the hoop was thwarted by Andris Biedrins as he had to hold the shot longer than he wanted and was barely able to even hit the bottom of the rim. A very forgettable game for Denver’s star player as Melo finished the contest going 0-5 from the floor and just 7-22 for the night.

The Nuggets were very fortunate to even get to overtime as the refs (who were very poor most of the evening for both sides) failed to blow their whistle for Anthony Tolliver’s last second heave as Melo basically racked him across the arms.

Once in overtime, it was the Chauncey Billups show for the Nuggets. The veteran point guard hit two big three-pointers, drove to the hoop and converted a difficult layup and sank to "cooler" free throws to ice the game for Denver.

Billups was calm and cool in his post game interview and seemed to take his extraordinary moment in stride … probably a good thing since Denver was barely able to defeat a 12 win team missing about 63 of their regular players. Billups filled up the stat sheet by tying his career-high in scoring with 37 points and adding 8 rebounds and 8 assists (a near triple-double for the veteran).

--The Nuggets recorded 18 total team assists. Passing the ball continues to be a major concern for Denver on the road. The Nuggets notched 8 assists in the first half, 0 in the second quarter and 10 in the second half. How does an NBA team not record an assist in a quarter?

--J.R. Smith finished 2-6 from three-point land, but his second make was basically a nail in the coffin tonight in overtime. Smith finished the game 6-15 from the field in 34 minutes with 14 points, 6 rebounds and 2 assists and 1 turnover. I liked Smith’s game tonight. He got completely robbed by ref Marc Davis on an And1 play (8:23 of the 4th qtr) in which Davis overruled two officials that were underneath the hoop because he had a great angle from behind the play at halfcourt. Hastings relayed that Davis called J.R. for lifting his knee into Chris Hunter and had Davis been able to actually see the play he would have been embarrassed by the call. The call swung momentum away from Denver, but actually may have given the Nuggets the chip on the shoulder they needed to get some fire going down the stretch. (You can nitpick calls all day, but that one was just horrific.)

--To keep nitpicking calls. Ellis was whistled for fouling Ty Lawson at the end of the third quarter at midcourt. The foul gave Lawson three free throws and allowed Denver to close the gap to 82-81 entering the final period. Ellis blatantly racked Lawson’s arms, much to his and the crowd’s displeasure. But if the refs were going to call that one then they should have called Melo for racking Tolliver’s arms at the end of the game. The two plays were pretty identical and Tolliver was robbed.

--The Nuggets defensive rotation is just bad. I think square wheels rotated better than the Nuggets … why do you think they invented the round wheel? Someone please teach this team how to rotate. Watching Golden State finish at the rim with no defender in sight is just frustrating and you can see the frustration with the players too. While we’re at it, let’s teach this team how to defend a pick-and-roll. Ellis and Curry were able to hit some big three-pointers late because coming off screens they faced … nobody.

--Kenyon Martin stepped up on the glass tonight. Martin recorded another double-double with 11 points and 14 rebounds. When Martin checked back into the game late in the fourth quarter and then into overtime he pulled down some key rebounds and showed once again that his athleticism and desire can be the difference for the Nuggets. His 1-4 performance from the foul line leaves much to be desired though.

--Carmelo Anthony played a bad game. I’m going to chalk Melo’s odd performance up to him just having an off night. Melo scored 23 points and went 9-11 from the foul line, but something just stunk about his evening. Melo tried to go one-on-one time and again in the second half and he was having disastrous results. The one time I recall Melo passing the ball off once he got it, Smith buried a three-pointer. I wish when Melo feels his game isn’t flowing that he’d realize just a bit more that his other skills can win games for the team. Melo is a gifted passer and can really throw teams off when he is dishing the ball. Melo had some pretty assists (4 total), but I just wanted to see more of them as the Warriors were loving him taking jumpers. Melo also led the team with 5 turnovers and was fortunate to not have a foul called on him on the last play of regulation. Funny to call 23 points an "off night" … that’s how good Melo is.

--Where was Ty Lawson tonight? Lawson wasn’t able to be a difference maker in the first half, but when he checked into the game in the third quarter he started working a little magic and helped erase a Golden State lead. Lawson only logged 17 minutes and shot just 1-5 from the field scoring 5 points and notching 2 rebounds. Hopefully Lawson will be able to get things going tomorrow night, as he should have fresher legs than Billups (38 minutes).

--Free throws. Denver once again had trouble on the road converting freebie attempts. The Nuggets shot just 69.8% and missed 13 of 43 attempts. We saw the Nuggets drop games last season because of missed free throws and it almost did them in again tonight.

The Nuggets are now 3-0 against the Warriors and they could easily be 1-2 against them. I’m pretty happy that Golden State will probably be a lottery team because I would not want to see this free wheeling team in the post season. 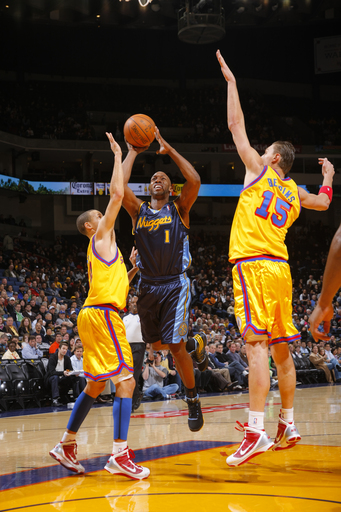 Reader ParkHillNative sent along this picture from his seats at the game last night. Pretty dark in Oracle Arena ... 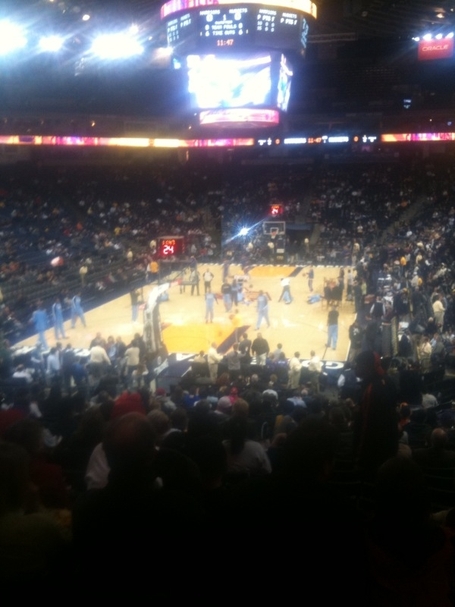