Breaking down the first half of the season...

Share All sharing options for: Breaking down the first half of the season...

Let's look back at the first 40 games of the 2009-10 Nuggets season to glean any clues into how the next 42 games will play out.

I should probably have waited for one more game to be played before writing this, but with the Nuggets due to play yet another back-to-back at Golden State on Wednesday and then home against the Clippers on Thursday, I figured we should review the first half of the season now.

First off, it's surreal to think that half of the season is already over.  I heard somewhere that the older you get, the faster the years fly by because your memories cumulate (or something like that).  This must be the case because I feel like it was just yesterday that we were cheering our Nuggets on to the Western Conference Finals, and here we are wondering if they'll even get that far again.

But before projecting into the future, let's revisit the recent past...

The Good: Sitting at a very respectable 26-14, the Nuggets are once again ensconced among the Western Conference's elite.  They're on pace to win 53 games, and if they did so it would be the first time in franchise history that the Nuggets had three consecutive 50-win seasons (of course, last season made it the only time in franchise history that the Nuggets had two consecutive 50-win seasons).  And it must be noted that the Nuggets have gotten to the 26-14 mark while weathering injuries to Chauncey Billups (out eight games), Carmelo Anthony (five), Kenyon Martin (two), Ty Lawson (four) and a seven-game suspension to J.R. Smith.

The Nuggets have racked up some impressive wins against the NBA's elite, as well, having beaten the Lakers, Cavaliers, Magic, Hawks, Suns, Rockets, Jazz (twice) and Thunder at home, while besting the Jazz, Trail Blazers and Spurs on the road.  The Nuggets have the NBA's second-best home record and have proven to be adept closers, winning 21 of 23 games when leading entering the fourth quarter.  Given that the Nuggets aren't surprising anyone this season as they did last season, these are solid numbers.

The Bad: With Billups on board last season, the Nuggets didn't lose a single game to a sub-.500 team until February 7th.  This season, they've already dropped seven games to sub-.500 teams (two at Pepsi Center) and have also lost to Miami and Charlotte, both of whom may be below .500 by season's end.  Additionally, while being saddled with a Western Conference high 22 back-to-back games, the Nuggets have been the beneficiaries of very favorable scheduling when it comes to their home games.  Among the aforementioned victories over "elite" teams, seven of those nine home wins came against teams playing the second of a back-to-back and only one game (against the Suns) was a true dogfight to the very end.  I'd argue that none of these victories have much of a bearing on postseason predictions, as teams never have to play back-to-backs in the playoffs.

The Ugly: Among those losses to sub-.500 teams were two appalling defeats: home against the lowly Timberwolves and on the road to a depleted Pistons team that was playing the second of a back-to-back.  Both were unacceptable losses.  The Nuggets are also a poor rebounding team, ranking 21st in the NBA in total rebounds, which is really a misleading number (on the high side) because the Nuggets play more possessions than most team due to their frenetic pace.

Perhaps most alarming, the Nuggets went 3-5 in Billups' absence, but it's really more like 2-7 because the Nuggets lost at Portland when Billups missed the entire second half after reaggravating his groin injury and were handed a home victory against the Warriors by the referees on a phantom foul call on Monta Ellis against J.R. Smith.  The Nuggets are rudderless without Billups.

Most Important Stat of the Season: 9.7/86.8.  Those are Melo's free throw attempts per game (second in the NBA) and free throw shooting percentage (11th), respectively.  Even Melo's most loyal supporters have been begging him to get to the line more over the years, and he's finally doing it this season.  It's no accident that Melo - who came into the new season in fantastic shape - is having his most productive and best season of an already great career.

First Half MVP: Billups.  Even though Melo is having an MVP-caliber season, the Nuggets were able to weather Melo's injury and finish 3-2 - including victories at Utah and home against Cleveland - whereas sans Billups they were 3-5 (but should have been 2-7 as noted above).  Runners-Up (tied): Melo and Kenyon Martin.  Melo has the numbers, but K-Mart has been the glue and carried the Nuggets admirably in Melo's absence.

First Half Best New Acquisition: Lawson.  The rookie from UNC gives the Nuggets a speedy X-factor unseen in Denver since Earl Boykins was here.  But unlike the veteran Boykins, the rookie Lawson plays pass-first and is smart with his shot selection.  Runner-Up: Arron Afflalo.  You have to love the effort and professionalism brought by Afflalo on a nightly basis.

First Half Stiff: Smith.  As has been documented by Nate and myself as well as our readers, Smith's erratic shooting is becoming problematic.  What should have been another leap year in improvement for Smith has instead been a reversion in field goal percentage (down 3.5% from last season to 41.1) and three-point percentage (down 6.5% to 33.2...egads!).  As a microcosm of Smith's poor shooting this season, one of his open three's against the Jazz on Sunday night smacked the backboard and never came close to the rim.  Runner-Up: Chris Andersen.  It's a cliche to say "oh, now that he got his big contract he's taking it easy" but most unfortunately, that's exactly what appears to be happening with the Birdman.

First Half Grade: The Denver Post's Mark Kiszla gave the Nuggets a C+ in his latest column about the team, citing the Nuggets lack of a consistent effort on a nightly basis.  Kiszla is right about the effort being a problem (Nuggets head coach George Karl has brought it up numerous times), but I think a C+ for a team that's weathered injuries and is on pace for 53 wins is too harsh.  Considering the injuries, the back-to-backs and the lack of a true big man that would enable Nene to move to power forward, I'd give the Nuggets a solid B.  Unfortunately, the schedule gets brutal from here on out...

Second Half Prediction: Have you looked at the schedule?  Oh, boy.  After playing back-to-back against the woeful Warriors at Oakland and the always struggling Clippers at Pepsi Center, 11 of the Nuggets next 12 games are against plus-.500 teams, including road dates at Houston, Oklahoma City, San Antonio, the Lakers, Utah (one night after playing at Los Angeles on ESPN in an 8:30 start...the Nuggets might as well concede that Utah game now) and Cleveland.  Fortunately, the All-Star Break comes up before that Cleveland game, meaning non-All-Star Nuggets will get eight days rest.

But things don't get much better from there.  Including the at Cleveland game, the Nuggets have three pairs of back-to-backs within 11 days of each other, including an at Lakers/at Suns back-to-back to end February and begin March.  Soon thereafter they have a four-game Midwest-ish road trip followed by a five-game Eastern-ish road trip that includes games at Boston (the second of a back-to-back, naturally), Toronto, Orlando and Dallas (also the second of a back-to-back, after playing at Orlando the night before, naturally).

The Nuggets wrap up the season with five of their last seven games at Pepsi Center, but among those home opponents will be the Lakers, Spurs, Blazers and Grizzlies...and their final two road games are at OKC and at Phoenix.

In summary, the Nuggets should have beaten one or two more of those sub.-500 opponents when they had a chance, because 30 of their final 42 games will be against teams at or above .500 and in the playoff hunt.  That said, beating plus-.500 teams hasn't been the Nuggets problem.  And thus, I foresee the Nuggets - assuming they stay healthy - winning 27 of their last 42 games and continuing at their current pace to finish with 53 wins.  Unfortunately, 53 wins will likely won't be enough to secure a second-seed, and the Nuggets will find themselves jockeying for position with Dallas and San Antonio until the final game of the regular season.

Didn't we just go through this last season?  It feels like it all happened yesterday...

Before signing off, check out this photo that was just sent to me by a friend via Garrett W. Ellwood of AP Photos (note the skinny guy with dark-rimmed glasses and the "Denver Stiffs" T-shirt just to the right of LeBron James!)... 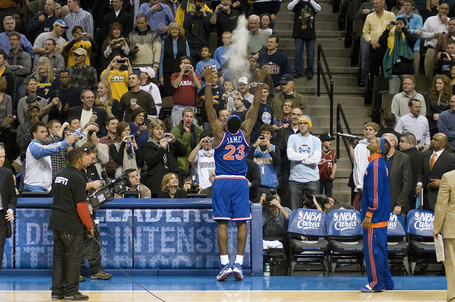