Kenyon Martin has amassed 83 technical fouls in his nine-year NBA career ... 9.2 per season.  His emotions can get the best of him at times, but that same fire allows him to transform an entire arena in a flash.

Experience: K-Mart will be entering his 10th NBA season.

Contract status: Martin has two-years and roughly $32.1 million left on his contract. The last year of his deal for the 2010-11 season is a player option for $16.5 million.

As the 2008-09 season unfolded we started to hear more about this Nuggets team ... mainly that George Karl gathered the team in the offseason and told them, "I've done it your way for three years, and it hasn't worked," he (George Karl) said. "Pretty and cool doesn't win games. Gritty and tough does." (from Robert Sanchez's piece Rebound in 5280 magazine)

Gritty and tough. Two words that can be used to describe K-Mart's game ... along with high-flying. The Nuggets transformed themselves into a a tough team as the season wore on and in the playoffs they even began to take on the name the Denver Thuggets for their perceived rough style. And the one player who began to embody this toughness the most was Kenyon Martin.

Whether you are a fan of his game or not, he set the tone for the team in the playoffs. Martin either made an early play defensively or gave a hard foul to get his point across that the Nuggets were not going to let you have anything easy. There was talk about Denver stealing a page from the Detroit "Bad Boys" Pistons of the late 1980s and early 1990s ... a throwback to the physical basketball played during those times. Martin played the role of enforcer for the Nuggets perfectly.

And nobody could blow the lid off the Pepsi Center like Martin after a ferocious dunk shook up the carbonated home crowd. I love having K-Mart on this team.

During the 2003-04 season, Martin's last with the Nets, I had many conversations with my buddy Rory about how great is was going to be adding the All-Star power forward to our team. There was never any doubt that the Nuggets were going to sign him and I couldn't have been happier. Was I happy that Denver decided to do a sign-and-trade deal and give up three first-round picks to secure Martin? No. And by the sounds of a New York Times article by Liz Robbins, New Jersey wasn't going to be able to match Denver's offer anyway. But what did I care ... Denver locked up the player that I wanted.

Things went from bad to worse during the 2005-06 season when Martin was suspended by the franchise during a first-round playoff series with the Los Angeles Clippers. It looked as if Martin's days in Denver were over as his body was betraying him and mentally frustrating him to the point where the team suspended him for "detrimental conduct."

But then in the 2008 offseason things changed for Martin. The Denver Post's Chris Dempsey wrote specifically about Martin in his piece titled, Confessions of a converted fast break coach:

Karl, who had past run-ins with Martin, thought he’d be the toughest to get on board with the changing philosophy he wanted to implement – more discipline, improved professionalism, better leadership, and a focus on defense on the court.

"The guy that jumped in really quick, was Kenyon," Karl said. "We thought Nene and Kenyon were the hardest guys. Kenyon basically said this is the only way we can survive. And as soon as he got back (for training camp) we met and he said ‘You’re not going to have any problem with me. I’m going to be your leader.’ He jumped in and basically called himself out.

"We had our first (team) meeting of the season and he said ‘I’ve been a problem for coach, but it’s not going to happen anymore, and I’m going to be the policeman.’ Our off the court activity was part of it, too."

The change of Martin and the rest of the Nuggets was easily evidenced on the floor and helped lead to the Nuggets most successful campaign in over 20 seasons. 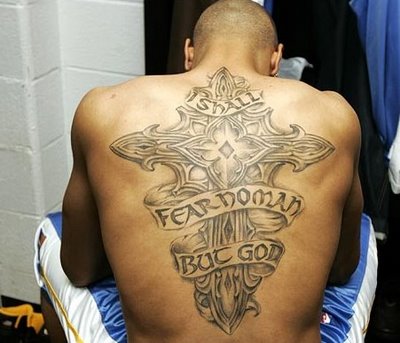 Positives / What he brings: As mentioned above, Martin sets the tone for the team. He has the ability to guard bigger players with his athleticism. He has lightening quick hands and is great at slapping the ball away from his man before a shot attempt can even take place. His jumping ability makes him a good rebounder, although his desire to go after more misses could be higher. He loves to run the floor and can finish with the best of them above the rim. He has shown improved shooting range and even likes to fire up the occasional three-pointer (Nate frowns and shakes head.) His attacking style allots him plenty of free throw opportunities. From the looks of things his teammates enjoy playing along side him and feed off his energy. A very emotional player and that emotion can bring out some great things and some not so great things.

Negatives / What needs to improve: Well at 32 years-old there isn't going to be a lot more improvement in overall game. Martin did show a more reliable jumper this past season and as he ages he'll have to rely more and more on his shooting touch than his freakish athleticism. But the good news is that his athletic prowess looked better than it has in years. As a career 64% free throw shooter I'd like to see him return more to that percentage or better than the 60% he shot last season.

When you talk about K-Mart you have to talk about his emotional play. At his high-point (or low-point) he recorded 17 technicals and four ejections during the 2004-05 season. But in his last two seasons he has recorded just 11 technicals in each season and was only ejected from one game (this past season.) I think most of us will remember the technical foul Martin received against the Lakers' Sasha Vujacic for holding his leg while laying on the floor. K-Mart will from time-to-time make you question your sanity with those types of plays.

His scoring averages have dipped in each season since coming to the Nuggets.

When Martin was a Net he was asked to handle more of the offensive load as the second or third scoring option. In Denver, Martin is asked to be a more defensive minded player and is realistically the fourth or fifth scoring option behind Melo, Billups, J.R. Smith, and even Nene. And with his little running laser in the paint I think we can all live with him not being leaned on heavily on the offensive end.

Finally his contract. Everyone who talks about Martin loves to mention his deal. Was he ever a max-contract type player? Well, he was a legitimate All-Star at the power forward spot when the Nuggets traded for him. Rod Thorn (the GM in Jersey at the time) didn't think Martin would get a max-contract, but obviously he was wrong ... both Denver and Atlanta offered him the max in 2004. With the final year of his contract coming after next season ... how many people will go from hating his bloated contract number to imagining what his expiring $16.5 million deal could bring in through a trade?

Outlook for 2009-10 season: If the Nuggets want to continue to be a tough and gritty team then K-Mart will have a spot on this roster. His defensive minded play makes him a valuable contributor for the Nuggets. In the 2007-08 season Martin shot 53.8% from the field ... last season he shot 49.1%. I'd like to see his numbers in that area once again. Martin is still a 30+ minute player in the league. Offensively I would like to see Martin defer a bit more to his teammates next year. He averaged 9.8 shots per game to Nene's 9.2 per game. Denver doesn't need Martin to carry the big man scoring load as Nene needs to up his production. Defense is what Martin became known for in the playoffs last season as he is Denver's enforcer.