Petro back with the Nuggets

Share All sharing options for: Petro back with the Nuggets 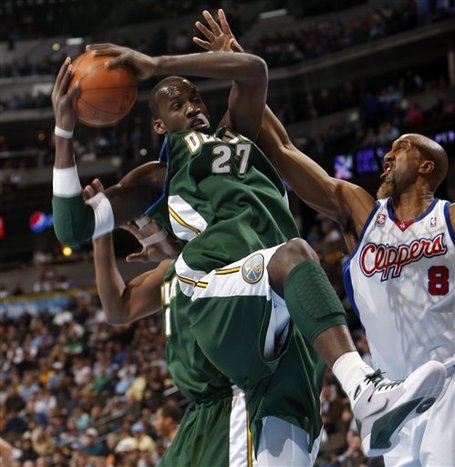 The search for the fourth big-man is over ... for now. The Nuggets have reached terms with center Johan Petro, according to the Denver Post. Terms of the deal have not been disclosed, but Denver turned down Petro's $2.8 million qualifying offer back in June, so I'd expect the deal to be for less than that amount.

Once again this is an underwhelming move by the Nuggets, but Petro brings two things: youth and size.

The Frenchmen was a late first-round pick by the Seattle Supersonics back in 2005 (25th overall) and came over to the Nuggets in a trade for Chucky Atkins. For his career he averages 5.4 points and 4.3 rebounds.

Petro showed signs of athleticism and the ability to crash the boards in limited duty last season. But he also showed he's still an offensive liability converting on just 42.9% of his shots with Denver. He is raw and a project player and a big-guy who likes to play facing the basket without the shot. He will shoot the jumper freely although it's not part of his game.

For some reason Melo liked to feed Petro when he was on the floor. It may have been because he was so wide open, but I'm assuming after Melo let the ball go he soon regretted his decision.

If Petro hit the gym hard this offseason and can prove to be a bit-player then he could add value to this team. His biggest challenge is realizing his role is to rebound, defend the post, and block shots. I have argued all summer that the Nuggets really don't have the minutes to give to a talented big man like a Jeff Foster or Marc Gasol.

If you break down the positions as they are now ... Nene gets about 30 minutes a game (minimum), K-Mart about 30 (minimum), and Birdman about 20. There are only 96 minutes to give away at the power forward and center position and with the three guys taking up roughly 80 of those minutes ... it's going to be very hard to entice a guy, who can play, to come to Denver for the other 16 minutes that might be available (assuming the three mentioned above only play the minimal minutes I outlined.)

There could be more moves up the front office's sleeve, but now the Nuggets have 12 players under contract and we all think they will only carry the minimum 13 heading into the season ... leaving a swingman spot open for Wally World or Rashard McCants or Player X.

When will the chess game start ...