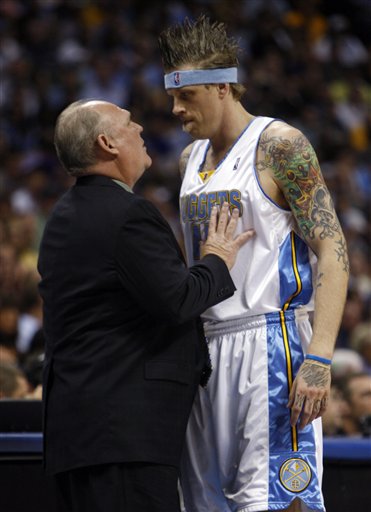 I was checking my emails yesterday and an old familiar name popped up in my inbox. An old high school buddy Pete emailed me from China, where he is teaching English for the summer (we had some epic basketball battles in Team Sports). It appears that Denver's favorite Bird has grown some new feathers ... aka more tattoos. Check out the picture after the jump!

Here is the email I received:

I was so excited when I saw this and you're one of the only people who I think would appreciate it. (You can also post this on your blog.)

So I'm spending the summer in China right now. This morning I crack open China's largest English language newspaper, The China Daily, and what do I see in the sports section? It's the Birdman! I haven't been this excited about a newspaper clipping since my youth soccer team got listed in the paper for winning the Pepsi Cup.

Is this the beginning of Birdzilla's world domination? I sure as hell hope so.

I attached a photo.

And here is that attached photo ... notice on Birdman's left leg there appears to be a flock of birds. 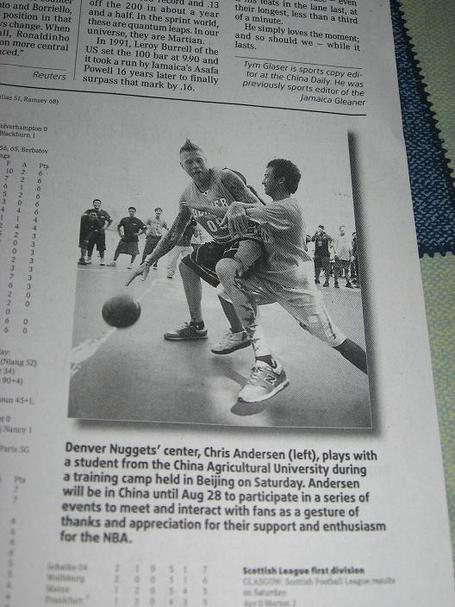 You can clearly read the above picture caption that states the Bird will be in China until August 28th. Pretty awesome that Andersen is giving back to the country that gave him his first crack at professional basketball. Remember, the Bird was undrafted out of Blinn Junior College (Texas) and spent his first season of professional basketball playing for the Jiangsu Nagang of the Chinese Basketball League during the 1999-2000 season.

While playing in China Birdman averaged 17 points on 53.6% shooting, 13.5 rebounds, and 2.5 blocks per game. Just imagine if he were able to do that for the Nuggets next season!

After doing a bit of research on the good old intraweb I came across this link from the English People's Daily Online. Click through all four pictures of the Bird interacting with players at Chaozhou-Shantou Gymnasium in Shantou, south China's Guangdong Province. I love the Grizzlybird look and the enthusiasm he seems to have with the kids.

Again ... the link is right here (click on these words!) You can also see the Bird's bird tattoos in these photos.

Thanks again Pete for the information!

It's great to see a Denver Nugget in some positive light again this offseason. Perhaps Pete is right ... Birdzilla World Domination awaits.