Still waiting on that point guard ...

Share All sharing options for: Still waiting on that point guard ...

My gut (which seems to be growing over the years) tells me that Anthony Carter will be brought back ... I'm about 73.1% sure of it, for those of you that are really paying attention later on ... that's the same percentage as A.C. from the foul line last season. I discussed all the plusses and minuses to bringing A.C. back earlier in the month.

The reason I bring this back up now is because the list of potential available point guards is shrinking by the day.

Aside from Watson, Sessions, and Robinson (whom Denver can't sign if they want to develop Lawson) the list above looks about as appetizing as Rocky Mountain Oysters. The way I see it there are really only two options for the Nuggets:

To quickly reiterate ... Carter will bring you fairly solid defense, the willingness to share the ball and get his teammates involved, and the ability to perfectly inbound the ball from out of bounds. (too soon?)

But there will probably be a sneaking suspicion from the Denver fans about the return of A.C. as reader Running Donut pointed out nicely the other day:

Running Donut: "Should AC return, I expect he would want to be given the same role as last season. Depending on Ty Lawson's performance, that may be nearly impossible. This combined with GK's affinity for Carter is very troubling to me. Personally, I see the potential for a dangerous conflict of interest that could be a dividing force within the team and organization."

(Running Donut ... I know you'll probably read this, so, please inform us on the handle name if you want.)

These same fears have crept into my head as well, so I feel safe assuming that the above is a shared feeling across Nuggets Nation. If A.C. is brought back ... how much will that hurt the benefits that Ty Lawson may bring?

George Karl will be asked to balance this out and it's really not a very easy task ... at least not to an idiot like me!

The entire A.C. dilemma feels like getting off crutches for the first time. You know your injury may be healed, but if you give up your aide too soon you may fall flat on your face. On the other hand, you are continuing to weaken your new leg/ankle/knee by using the aide of a crutch for too long.

Though the question of "When to give up the crutches?" is probably better asked next season when we see how Lawson performs in the league ... it's not a bad one to consider now. Whomever Denver elects to bring in knows they are probably in a lame duck position. The guy Denver signs will almost surely get a one-year deal and know that at some point the minutes may not be there as soon as mid-season if Lawson excels. So, if there is a multi-year offer out there then one must consider the age old wacky NBA question ... winning or money?

It's a great thing when you can get both, but at least in this situation it may not work that way as Denver is lacking in the money department.

And that brings me to Bobby Jackson. In order for him to come back to Denver he'd have to be willing to take a huge pay cut from $6.4 million last season to the minimum of $1.3 million this season (unless Denver offered up the bi-annual exception of $1.99 million.)

The reason I'm looking at Jackson is simple ... Denver may require some scoring off the bench if Linas Kleiza does not return to the team ... heck, even if L.K. is back it wouldn't hurt to adding a little scoring pop to the bench. Jackson has played the role of 6th Man basically his entire career. The most games he has ever started is 53 during his rookie season, ironically, with the Denver Nuggets in the 1997-98 tilt.

B-Jax knows how to score the ball. Entering his 13th season he has averaged double-digit scoring seven times, topping out at 15.2 point per game with the Sacramento Kings in the 2002-03 season. Anthony Carter's career mark was set with Denver in the 2007-08 season when he started 67 games (played in 70) and averaged 7.8 points per game. Let's dive into a head-to-head look at Carter and Jackson from last season:

Again, I see the move of inking Jackson over Carter as one that would allow Denver's bench more offensive punch. Carter is known as a great effort guy and works his ass off on defense. But if Lawson can shoulder some of the load and become a capable defender then Jackson may be called upon to help stretch the floor, a career 35.4% three-point shooter, and give the Nuggets a reliable scoring guard off the bench when needed.

When Billups was not on the floor the Nuggets offense struggled to find the same cohesiveness that old #7 brought. The second unit was hindered by Carter's lack of ability to create his own shot when called upon to do so. Jackson is at the point in his career where he doesn't have a lot of time left to chase the title. I love upgrading the bench with his scoring and he's not that much of an upgrade over A.C. to be a detriment to Lawson.

If Jackson were to sign ... it'd at least finally quiet the chatter around Nuggets Nation as to whom the third point guard will be. 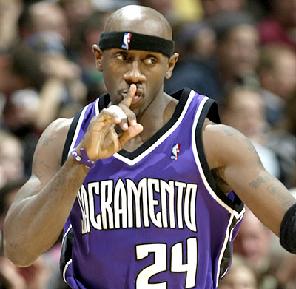